When Compassion Is Cruel 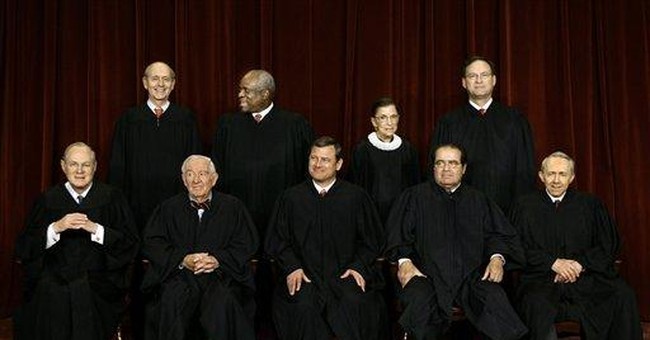 People don't always get what they deserve in this world, so it is gratifying to see when someone does. It happened Wednesday when a California parole board insisted that Susan Atkins, a 61-year-old amputee with incurable brain cancer, live her few remaining months in prison rather than the embrace of her loved ones.

This may sound like pointless excess inflicted on someone whose crime, committed 40 years ago, is ancient history. But even to mention Atkins without first mentioning her victims is an affront. In 1969, she repeatedly thrust a knife into an innocent woman who was eight and a half months pregnant, killing her and her unborn child.

It's a crime that might be forgotten except that Atkins was a member of Charles Manson's murderous cult. Her victim, actress Sharon Tate, stabbed 16 times, was one of seven people slaughtered in Los Angeles in a two-night spree that Manson, insanely, thought would ignite a massive race war.

Atkins and her co-defendants were convicted and sentenced to die, but her sentence was reduced to life in prison when the state supreme court abolished capital punishment in 1972. Her illness served as grounds to ask the parole board for "compassionate release" so she could peacefully expire outside of prison.

Even her prosecutor, Vincent Bugliosi, endorsed the idea. "She's already paid substantially for her crime, close to 40 years behind bars," he told The Los Angeles Times. "She has terminal cancer. The mercy she was asking for is so minuscule."

But the parole board unanimously refused. No doubt the board members recalled that in a 1993 parole hearing, Atkins acknowledged that when she had her own opportunity to grant clemency, she chose not to. Tate begged Atkins to spare her baby, to no avail.

"Compassionate release" already has a bad name in this country because it was the basis for Scotland's decision to free the only person convicted in the 1988 airline bombing over Lockerbie, which killed 270 people. Abdel Baset al-Megrahi was serving a life sentence but, afflicted with terminal prostate cancer, was sent home to Libya to live out his remaining time on Earth.

Scottish Justice Secretary Kenny MacAskill defended the decision by saying, "Our justice system demands that judgment be imposed but compassion available." He noted that the killer "now faces a sentence imposed by a higher power. It is one that no court, in any jurisdiction, in any land, could revoke or overrule. It is terminal, final and irrevocable. He is going to die."

If we are going to rely on the Almighty in these matters, though, I would prefer that pleas for clemency from convicted killers also be addressed to Him. The truth is we are all going to die, and if we prefer not to do it in prison, we have the option of not committing crimes whose punishment might get in the way of our last wishes.

Like Atkins, Megrahi had already been spared execution, which amounts to gratuitous cruelty. Many of us who oppose the death penalty nonetheless think that when someone gets a life sentence, we should not have to parse the meaning of "life." It ought to mean till you're dead, which neither Atkins nor Megrahi is.

It's some consolation that Megrahi is something of an exception, since infamous killers don't usually get the chance to walk free. California law excludes "compassionate release" for anyone sentenced to life without parole. But mere life sentences often qualify for early release.

One was granted to Lynette "Squeaky" Fromme, a member of the Manson cult who was not involved in the Los Angeles murders but who in 1975 walked up to President Gerald Ford in Sacramento and shoved a loaded pistol in his face. She was convicted of attempted assassination and went to prison. But last month, still quite alive at 60, she was freed to go her merry way.

Maybe Fromme is now harmless, and maybe there is money to be saved by letting her or Atkins out of their taxpayer-financed housing. But few government funds were ever better spent. And it's hard to see why people who have committed violent crimes deserve any consideration beyond the fair trial and sentencing they have already gotten. Compassionate release is compassionate only to criminals, not their victims.

All this brings to mind the exchange in Ayn Rand's novel "Atlas Shrugged," when one character asks another to define the opposite of charity. The answer? "Justice."