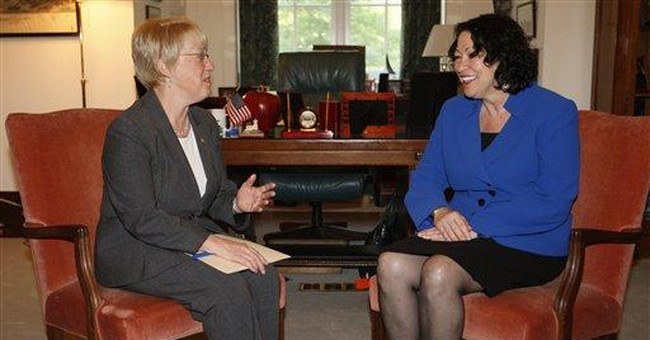 Last summer, the Supreme Court, for the first time ever, said the Second Amendment protects an individual right to own a gun for self-defense. It was a historic decision that put real limits on gun control. But gun-rights advocates complain that someone didn't get the memo -- someone named Sonia Sotomayor.

Exhibit A is her decision in January to uphold the conviction of a New York man for possession of fighting sticks called nunchakus. He said the law violated his right to keep and bear arms. But in a unanimous decision joined by Sotomayor, the 2nd Circuit Court of Appeals found "it is settled law … that the Second Amendment does not apply to the states and therefore imposed no limitations on New York's ability to prohibit the possession of nunchakus" -- or, by implication, firearms.

Does that sound like the sort of arrogant verdict you would expect from an activist, liberal, gun-hating judge? It shouldn't. Sotomayor's decision was a model of judicial restraint that was entirely appropriate given the Supreme Court's record.

Don't take my word for it. The issue of whether the Second Amendment limits the power of state and local governments recently came up in the 7th Circuit Court of Appeals in Chicago. Good luck finding an activist liberal on the panel issuing that decision. It was composed entirely of judges appointed by Republican presidents. Yet it ruled exactly the same way.

The author of the decision was Frank Easterbrook, one of the most intellectually formidable conservatives on the federal bench. In his opinion, he said "we agree with" the Sotomayor court's decision. Last year's Supreme Court ruling, he noted, applied only in the District of Columbia, a federal enclave, and past Supreme Court rulings rejected extending the Second Amendment to the states.

That conclusion, said Easterbrook, "is open to re-examination by the justices themselves when the time comes." In the meantime, a lower court should not "strike off on its own." There is no guarantee, in his view, that the Supreme Court will expand the reach of the Second Amendment. "Federalism," he wrote, "is an older and more deeply rooted tradition than is a right to carry any particular kind of weapon."

You could interpret Sotomayor's ruling (and Easterbrook's) as proof of something bad: a rejection of the Second Amendment. Or you could interpret it as proof of something good: judicial restraint. It is tempting for supporters of gun rights, myself included, to wish that lower courts would go beyond what the Supreme Court has done. But that is the kind of judicial activism we tend to oppose when it's done for other, less congenial causes.

But her critics charge that Sotomayor's anti-gun bias was on display even before this decision. In 2004, she joined a decision dismissing a Second Amendment claim by an illegal immigrant convicted of handgun possession, noting that her court had previously said "the right to possess a gun is clearly not a fundamental right."

Sorry, but this assertion is no smoking gun either. It was merely a reasonable summary of legal precedents that she was obligated to follow. The Supreme Court's chief previous ruling on the Second Amendment, in 1939, after all, rejected the idea that individuals have a right to own guns for personal use.

If that weren't clear enough, in 1980 the justices stated that a federal ban on gun possession by felons did not affect "any constitutionally protected liberties." When Sotomayor's court said gun ownership is not a fundamental right, it was giving not a personal opinion of what should be, but a simple declaration of the state of the law as it stood in 2004.

Of course Sotomayor may have found that it also fit neatly with her policy preferences. Given her generally liberal profile and her selection by a president who is not exactly a Second Amendment stalwart, the chances are pretty good that she takes a favorable view of gun control.

But you can't prove it based on how she's ruled from the bench. Nothing in her judicial record would preclude her from voting to reaffirm the court's decision last year -- or going further to strike down state and city gun bans.

Maybe that's hoping for too much. But Supreme Court nominees have surprised presidents before. Until we find a certified mind reader to ransack Sotomayor's innermost thoughts about gun laws, we ought to admit something commentators hate to say: We don't know.