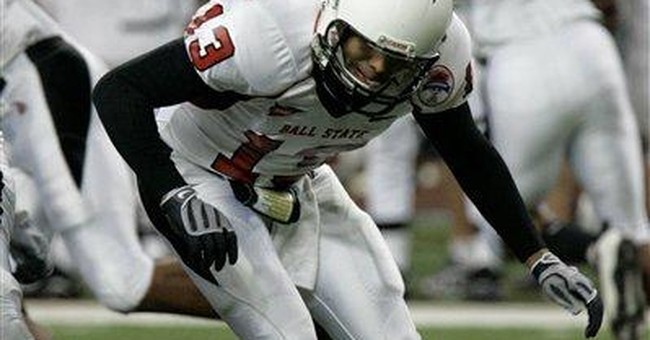 We all know what a boom looks like. A frenzy of mad excess, with abundance rising to levels no one imagined, the old virtues of thrift and prudence giving way to a get-all-you-can mentality and everyone assuming the party will go on forever.

Barack Obama has weighed in against the existing Bowl Championship Series as a way of determining the national title among college football's top-tier teams. What he has failed to address are two far more grievous afflictions plaguing the game: a gross surplus of scoring and a mortifying multiplicity of bowls.

In the golden days, the game consisted of a lot of blocking and a lot of tackling. Teams marched laboriously down the field, if they moved at all. Occasionally they scored. More often they didn't.

In those days, defense was not a dirty word. In the 1969 "game of the century" between No. 1 Texas and No. 2 Arkansas, both unbeaten, the Longhorns prevailed by 15-14, which was considered perfectly normal. In 1966, when No. 1 Notre Dame and No. 2 Michigan State battled to a 10-10 tie, the stands were not littered afterward with the corpses of fans who died of boredom.

How things have changed. The last two BCS title games yielded an average of 65.5 points per game -- more than both of those earlier "national title" games put together. If there was any surprise in the last two title matchups, it's that there wasn't more scoring.

Today, after all, the entire point of the modern game seems to be to avoid all that unpleasant blocking and tackling, in favor of 60 minutes of keepaway. Last season, major college teams hit an all-time high, averaging a total of 58.5 points per game -- up by 11 points in the last 20 years. On average, there were more than seven touchdowns in every game. (By contrast, according to the sports data service STATS, NFL scoring has been stable since 1987.)

All the scoreboard activity at the college level is the product of more frequent and more effective passing. The typical team now spends more time airborne than JetBlue, throwing 34 times every time it takes the field.

But if I wanted to see two teams racing back and forth throwing the ball and scoring incessantly from start to finish, I'd be watching the NBA. In fact, one of the minds who shaped this new game, outgoing Purdue coach Joe Tiller, called it "basketball on grass," which he did not mean as a disparagement.

He also called it "sissy ball," which is undoubtedly one of the milder terms the legendary Ohio State coach Woody Hayes would have used. Hayes, who harbored a deep distrust of the forward pass, approvingly described football as a "crunching, frontal assault of muscle against muscle, bone upon bone, will against will." Those words do not conjure up the spread offense, which deploys up to five receivers whose goal is to elude touching, much less crunching.

Our forebears would have recognized this impersonation of football as a symptom of moral decline, reflecting an unwillingness to accept deprivation and a demand for instant and frequent gratification. The same phenomenon accounts for the mad proliferation of postseason bowl games.

This year, 34 of these will be played (more than double the number in 1980), creating the biggest glut this side of the housing sector. They include the EagleBank in Washington, D.C., the R+L Carriers New Orleans, the San Diego County Credit Union Poinsettia and the Gaylord Hotels Music City.

Think of it: Half a century hence, an elderly man will dandle his grandson on his knee and regale him with stirring tales of the 2008 San Diego County Credit Union Poinsettia Bowl.

He will be the only one who remembers. Filling all those instantly forgettable games requires 68 teams. Major college football includes only 120 schools. You don't even have to be average to make it. It is only a matter of time before bowls become like youth soccer trophies -- guaranteed to every participant, no matter how inept.

Maybe we should all take the view that, as Mae West put it, too much of a good thing is wonderful. But as the folks at Lehman Brothers and Citigroup can attest, unbridled excess can be a recipe for regret.