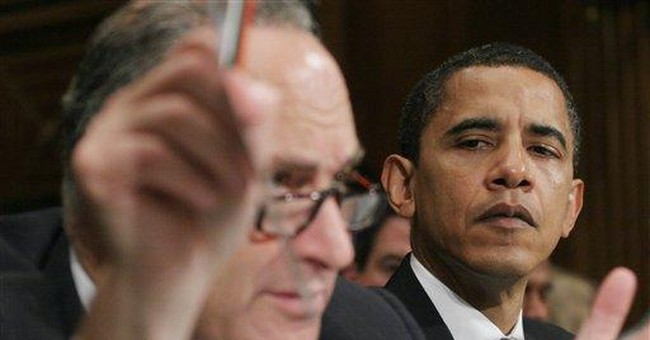 When a political party that has been a minority suddenly gains power, the change can be intoxicating. After Republicans gained control of the House of Representatives in 1994, you didn't need a Breathalyzer to detect the effect. It became obvious the instant they started batting around ideas for amending the Constitution -- everything from banning flag desecration to inventing new rights for crime victims.

None of these went anywhere. Even the hyperkinetic Newt Gingrich soon realized he had his hands full with the normal business of legislating. Sobriety eventually returned.

But Democrats are susceptible to the same peril. For years, they (along with a few Republicans, notably John McCain) have clamored for laws to purge campaigns of the baneful influence of money. Now, heady with their unaccustomed majority status, they have decided mere laws are not enough. They want to amend the Constitution.

The proposed amendment, sponsored by Senate Democrats Chuck Schumer of New York and Tom Harkin of Iowa, would overturn Supreme Court decisions that limit Congress' power to regulate the funding of political campaigns. The senators are right about one thing: The "reforms" they envision cannot be reconciled with the Constitution -- particularly that passage about free speech and free association. So if their ambitions cannot be reconciled with the First Amendment, too bad for the First Amendment.

Their discontent dates back to the Watergate era, when Congress tried to cure corruption by putting tight limits on political contributions and expenditures. In their zeal, lawmakers paid no heed to critics who said the restrictions would impoverish public understanding by impeding communication.

"Discussion of public issues and debate on the qualifications of candidates are integral to the operation of the system of government established by our Constitution," the court held. "A restriction on the amount of money a person or group can spend on political communication during a campaign necessarily reduces the quantity of expression by restricting the number of issues discussed, the depth of their exploration, and the size of the audience reached."

Subsequent measures have foundered on the same rocks. The 2002 McCain-Feingold law made it illegal to use corporate funds for radio or TV spots that even mention a candidate for federal office within 60 days of an election. This year, though, the court said that unless such commercials are clearly campaign ads in disguise, they may not be banned. When the purpose of a message is in question, wrote Chief Justice John Roberts, "we give the benefit of doubt to speech, not censorship."

Not Schumer and Harkin, who are joined in their crusade by Republican Sens. Arlen Specter of Pennsylvania and Thad Cochran of Mississippi. The amendment would give Congress complete authority to regulate "the raising and spending of money, including the setting of limits," for any federal campaign.

The most obvious travesty is that the amendment would repeal the First Amendment as it relates to campaign finance. This would be the first time in our history that we altered the Constitution to curtail liberties protected by the Bill of Rights.

It would also have the effect, not accidental, of protecting incumbent members of Congress from being unseated at the polls. Whatever else our leaders may try to achieve through campaign finance laws, you can be sure their paramount objective will be ensuring they stay in office.

Such restrictions are an easy way to accomplish that end in the hallowed guise of fighting corruption. Since they have numerous ways to keep their names in front of voters without spending money, incumbents have little to lose from spending limits. Challengers generally can't win votes unless they can deliver their message to voters, which requires sums of money that campaign reformers hope to deny them.

Fortunately, the amendment has dim chances of being enacted. A constitutional amendment requires a two-thirds majority in each house, and even McCain-Feingold didn't get that.

But the effort should serve two invaluable purposes. Democrats in Congress will learn the limits of their new power, and the public will gain a new appreciation of why the power of Congress needs limits.