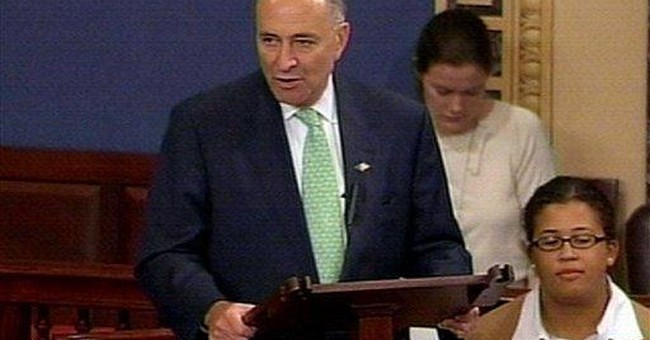 Lending institutions don't inspire mass affection, particularly when credit is tightening and interest rates are rising. At times like these, critics sometimes bring to mind the nameless character in "The Grapes of Wrath" who lamented: "The bank is something more than men, I tell you. It's the monster. Men made it, but they can't control it."

Today, the ghost of Tom Joad inhabits the body of Sen. Charles Schumer, D-N.Y., who spies a monster scarier than banks: lenders who offer subprime mortgages. Contemplating the plight of their customers, some of whom are finding it hard to meet their obligations, he demands new controls to shackle the beast.

The controversy stems from an increase in home foreclosures among people with subprime loans. These mortgages, provided to borrowers whose income or credit rating disqualifies them from standard loans, carry a higher interest rate and often feature balloon payments after a few years. Someone who can handle the initial payment may be overextended when the monthly cost jumps.

But the fact that some borrowers are behind on their payments is no condemnation of the system that furnished them credit. They are in the subprime market, after all, because their credit history or income suggests they are bad risks, and it's no shock to find that some of them turn out to be exactly that.

"Subprime" is a vile epithet to Schumer. But the very existence of this market is an achievement, since it offers funding to people who once were shut out of homebuying. Today, according to the Center for Responsible Lending, most mortgages provided to blacks, and 40 percent of those going to Hispanics, are of the subprime variety. In the past, these customers wouldn't have had to worry about foreclosure, because they would have been stuck renting.

As it happens, the overwhelming majority of subprime customers handle their obligations just fine. At last count, fewer than 14 percent of them were delinquent, meaning 86 percent were not. Most people pay what they owe, and those who don't suffer the consequences. Absent consequences, fewer people would repay, and mortgage providers would demand higher rates to lend to the remainder. "Helping" subprime borrowers would thus hurt most of them.

Schumer hopes to avert future foreclosures by insisting that homeowners demonstrate they have the income to afford not merely the initial payment, but the highest one they will eventually face. He also plans to spare current borrowers by spending tax revenues for their benefit -- as well as vigorously pressuring private financial institutions to "direct resources" to this worthy end. The money would go to nonprofit entities, so they can help debtors and creditors reach terms to prevent foreclosure.

But lenders already have good reason to work out bad loans, so they don't get left holding a property that, in today's market, may be worth less than the mortgage. If it's true, as Schumer claims, that many borrowers could qualify for cheaper loans, they are free to go get them -- and mortgage brokers have ample incentive to seek those customers out. The senator's bizarre assumption is that absent federal intervention, all these parties will blunder around without a clue.

In fact, most of them know what they're doing. A recent study for the National Bureau of Economic Research found that thanks to improvements in the mortgage market over the past 35 years, "households are now more able to buy homes whose values are consistent with their long-term income prospects."

A family whose disposable income stands to rise in the coming years can now get a mortgage that reflects its potential. Before such innovations as subprime loans, says one of the authors, Princeton economist Harvey Rosen, "you might know that you had great prospects, but it didn't matter."

Of course, some people will overestimate what they can eventually afford, and some of them will lose their homes. But most of these loans, however dicey they look to congressional Democrats, get repaid, which suggests the borrowers know best.

Schumer, however, would overrule their judgment and dash their dreams. They can take deep consolation in knowing it's for their own good.