What's Wrong With a Clutter of Candidates? 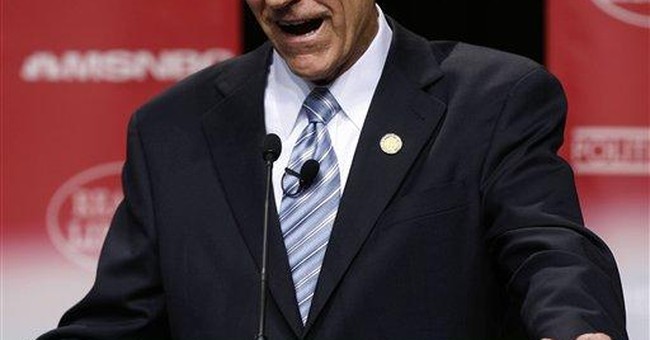 In more than one presidential election, I've walked into the polling booth, looked at the names on the ballot, crumpled to my knees in anguish, sobbed inconsolably and cried to the heavens, "Are those the only choices?" Okay, maybe I don't go through all the theatrics, and probably you don't, either, but we both know the feeling.

Well, the campaign gods must have been listening, because this year, we have more candidates than the Everglades has alligators. This abundance can be inconvenient, as when I picked up The New York Times the morning after the Republican presidential debate, saw a photo of the 10 participants, and realized I didn't know half of them from the clerk at Ace Hardware.

But having to bone up so you can distinguish Rep. Duncan Hunter of California from former Arkansas Gov. Mike Huckabee is a small price to pay for an array of options in the Republican primaries. The Democrats also have a crowded field. In the next debate, seven of them will divvy up 10 percent of the allotted time, and Delaware Sen. Joe Biden will take the rest.

Yet some people think all those choices are a terrible burden. An editorial in The Washington Post grumped that there are "too many candidates talking about too much." In the Post's view, "Voters trying to sort out their presidential choices aren't helped by debates cluttered with the likes of Mike Gravel (hint: he's a former senator from Alaska) on the Democratic side and Ron Paul (hint: he's a libertarian House member from Texas) among the Republicans."

Of course some people think it's not helpful to have the debates cluttered with the likes of Hillary Clinton and John McCain (hint: they're overexposed Washington veterans with a penchant for doing whatever it takes to win). But the Post's passion for the neat and orderly suggests that someone has been spending too much time with Martha Stewart.

In a nation of more than 300 million people in a campaign that still has a year and a half to run, is it absurd to imagine there might be 18 individuals who warrant consideration? If anything, the problem is that plenty of people who might make good presidents aren't in the race -- starting with former Joint Chiefs Chairman Colin Powell, Sen. Chuck Hagel, R-Neb., and former Sen. Bob Kerrey, D-Neb.

The profusion makes for crowded platforms, but it also introduces a wider range of opinion than you'll find on the Sunday morning talk shows. Only mavericks will challenge the entrenched verities that generally give us policy options running the gamut from A to B.

Without the peripheral candidates, the debates would resemble the dining choices available on rural interstates: Wendy's or McDonald's? Uncluttered debates would also rarely yield moments of unvarnished candor. One came from Mike Gravel, who summed up his view of Iraq: "You know what's worse than a soldier dying in vain? It's more soldiers dying in vain."

If the lesser-knowns make fools of themselves or attract no support, they probably won't be around long. But they ought to get a chance to offer their ideas to the American electorate before the campaign turns into a poll-driven battle of bank accounts and spinmeisters.

If the problem is too many people trying to get their message across at once, the answer is not to exclude candidates but to hold mini-debates among two or three at a time. I for one would buy a ticket to see Kucinich and Clinton face off on the war, or to watch Rudy Giuliani try to keep his composure while arguing about the constitutional limits of federal power with Paul.

And for anyone who thinks we have way too many candidates, my advice is to wait until Nov. 4, 2008. When you get your ballot and see the few choices on it, you'll miss the clutter.