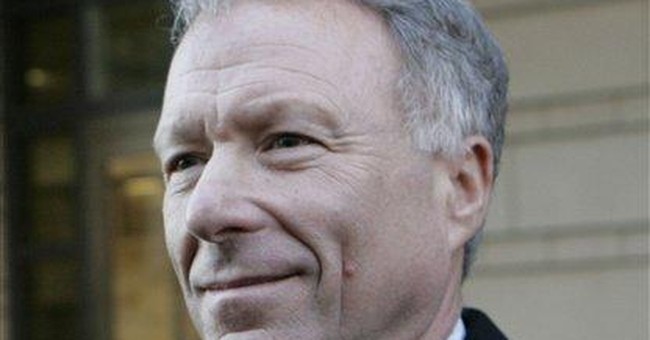 So now we have confirmation that Vice President Cheney's chief assistant set out to discredit former Ambassador Joseph Wilson by secretly telling reporters his wife worked for the CIA -- and then repeatedly lied about it during a federal criminal investigation. When George W. Bush assured us during the 2000 campaign that Cheney "is a man of integrity and sound judgment, who has proven that public service can be noble service," I doubt this is what Americans were expecting.

Nor does it quite jibe with what Bush and Cheney promised about the tone they would set. Cheney lamented that under Clinton, Washington had "often become a scene of bitterness and ill will and partisan strife." In accepting the Republican nomination, Bush confided, "I want to change the tone of Washington to one of civility and respect." How are we coming on that project?

Whatever else you can say about Scooter Libby's conviction, it yielded a mortifying day for an administration that lately has spent most of its time in an acute state of public embarrassment. Never mind if the original leak violated federal law, or if the prosecution of Libby for lying about it was justified. At best, the campaign against Wilson was petty and cowardly; at worst, it was dangerous and criminal. In either case, it is devilishly hard to square with what Bush and Cheney pledged when they came to Washington.

No one above the age of 6 believes everything a candidate for office says. Still, it's occasionally useful to go back and compare what politicians say they will do and what they actually do. It reminds us of the folly of putting faith in them, and it reveals that some partisans will stick with their guy even when he does exactly the opposite of what they thought he would do.

During the previous administration, such reflections were a favorite pastime of conservatives and other critics, who noticed that after being elected, Bill Clinton reversed himself on trade relations with China, allowing gays in the military and sending boat people back to Haiti. Then there was his affair with Monica Lewinsky, which provided howling proof of his 1992 complaint: "Our families have values. But our government doesn't."

Bush tapped into disgust over Oval Office shenanigans by vowing to "uphold the honor and dignity of the office to which I have been elected." It's good that he hasn't been canoodling with the interns, but where are the honor and dignity in leaking a CIA agent's name merely because her husband had the gall to criticize the administration? Imagine what Bush supporters would have said in 2000 if Al Gore's chief of staff had outed an intelligence operative for political gain.

The Plame leak is not the biggest of the administration's detours from its promises. During the campaign, Bush said Clinton's cardinal mistake was "to launch today's new causes with little thought of tomorrow's consequences." You could ponder for days and not come up with a better description of how we went wrong in Iraq.

Conditions in Iraq are not entirely within the U.S. government's control. But conditions at Walter Reed Army Medical Center can't be blamed on Sunni insurgents or al Qaeda terrorists. They can only be ascribed to the people in charge, who didn't make a priority of assuring that those wounded in battle would be treated in a manner commensurate with their sacrifice.

Bush once promised to do right by our men and women in uniform. During the campaign, he fumed that many of them had paltry incomes and poor housing. "This is not the way a great nation should reward courage and idealism," he announced, "It is ungrateful, it is unwise, and it is unacceptable."

So what words would serve to describe a military hospital where injured soldiers were subjected to filth, neglect and bureaucratic incompetence? This week, Bush pronounced the situation "unacceptable." What he didn't say is that until now, those conditions, though not acceptable, were somehow accepted.

The biggest surprise was that, unlike in past debacles, someone in a high position got fired for the failure. Maybe this time, Bush woke up in the middle of the night in a cold sweat, suddenly recalling what he said in 2000: "An era of tarnished ideals is giving way to a responsibility era."