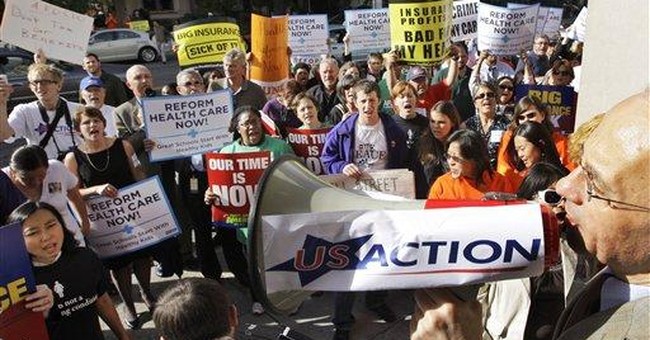 Why conceit? Because socialism's basic premise, according to Hayek, is that "man is able to shape the world around him according to his wishes."

Why fatal? Because, like all falsehoods and misconceptions, it leads to failure, and sometimes disaster.

Although the socialist label is being thrown around a lot now, we must recognize this isn't new. This conceit has been inflating in American hearts and minds for years, with the inexorable growth of government and the ongoing change in American attitudes about what government is about.

If there is anything new today, it's the extent to which we're taking this.

The Declaration of Independence, signed by our founders, states that man has the "unalienable rights" to "life, liberty and the pursuit of happiness" and that men form government to "secure these rights." According to Jefferson's words, the purpose of the government is to protect me.

Now Congress is moving health-care legislation in which the role of government will evolve to defining what health insurance is, forcing me to buy a policy that covers what government dictates, tracking my behavior through the IRS to see if I have complied, fining me if I haven't, and sending me to jail if I refuse to do it.

And we'll spend $1 trillion dollars or so that will come one way or another out of taxpayer hides to subsidize individuals who can't afford to buy this government defined health insurance.

Whoa! Wasn't this country supposed to be about freedom?

Didn't Jefferson write those words because the colonists who came to this then-unsettled continent wanted to get kings and tyrants off their backs?

Most of the Declaration is a long list of King George's violations of colonists' freedom.

It's worth being reminded of how it starts.

"The History of the present King of Great Britain is a history of repeated Injuries and Usurpations, all having in direct Object the Establishment of an absolute Tyranny over these States."

Do you get the feeling that what Americans once fought for we're now giving back?

Politicians are making a deal with us. We give up our freedom and they say they'll give us better, cheaper health care with everyone getting covered.

The odds of success here? Would you give me your most precious possession in exchange for my promise to do something that neither I nor anyone has every done before?

Consider the government central-planning conceit that we are now trying to recover from in the housing and financial markets.

According to Peter Wallison of the American Enterprise Institute, "almost two thirds of the bad mortgages in our financial system ... were bought by government agencies or required by government regulations."

Fannie and Freddie were bailed out last year, adding $5 trillion to our national debt, and put under government control. Now the news is it looks like FHA needs to be bailed out.

And, of course, low-income people who are the supposed beneficiaries of government compassion are the victims. Foreclosures in minority neighborhoods are reported to be seven times higher than the national average.

We can expect the same results from government taking over health care as we've gotten from housing socialism.

This country is about freedom. There's no substitute for the fruits of personal responsibility. Giving it up for the conceit of socialism is indeed a fatal mistake.