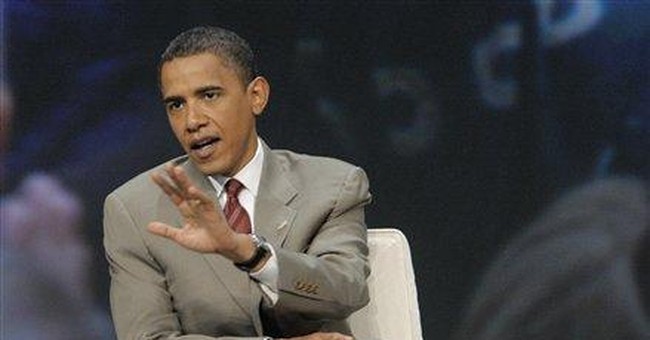 The headline on the website of German magazine Der Spiegel about Barack Obama's speech in Berlin: "Huge Crowds Left with Mixed Feelings."

Two hundred thousand turned out for the speech, but CNN's Candy Crowley reported an "absence of euphoria" at the event.

As Senator Obama went global with "Yes, we can" and "Change we can believe in" he left at least some of the horde in Berlin scratching their heads. Perhaps these Germans, out to hear what all the excitement was about, were looking for leadership and substance rather than kumbaya.

What they got was the global version of "There is not a White America and a Black America and Latino America and Asian American America -- there is the United States of America."

His message: "The walls between races and tribes, natives and immigrants, Christian and Muslim and Jew cannot stand. These now are the walls we must tear down."

At least some of the Germans listening to Obama surely sensed there was something problematic with what he was saying. His analogy of the tearing down of the Berlin wall to tearing down all lines of distinction between nations and religions was obviously fractured. The Berlin wall was a political wall that divided one people. It separated Germans from other Germans, a far cry from distinctions between nations and religions that Obama apparently wants to obliterate.

The German, French and British each have a strong sense of national history and identity.

Efforts for a European Union constitution that would establish links in Europe going beyond economics and extending to politics have thus far failed.

Perhaps the realities of Europe delivered an unanticipated surprise to the slick marketing machine driving the Obama presidential campaign.

Unlike in the United States, where you drive coast to coast and hear one language, where national culture is at least as influential and pervasive as regional differences, Europe consists of different countries. When you get to national borders, languages and cultures change.

For Obama, differences seem to be what cause the world's problems. We endlessly hear the story of his mixed-race background and his translation of his personal history into a message of the meaninglessness of difference.

It may come as a surprise to Obama, but for Christians, for Muslims, and for Jews, their differences do not amount to barriers to a better world but sources of meaning that define themselves and the world.

They want to be Christians, Muslims, and Jews. They just want protection. They want to be able to be who they are and live peacefully and securely. Those disturbing this security are the problem. Not the differences.

Which gets to Obama's very problematic idea about freedom.

He does not seem to grasp that the beauty of freedom is its respect for differences and creation of conditions, legal and political, which allow them to exist, flourish, and provide benefits to all. In fact, politicians with agendas to "unify," who think they know who and what everyone should be, are invariably those who threaten freedom.

Obama used the occasion of this speech to apologize to Europe about his country. "We've made a lot of mistakes, and there are times when our actions around the world have not lived up to our best intentions." But, covering his bases, he made a point to follow up and assure the crowd that ". . . I know how much I love America."

What every American should demand from Obama is clarification of what, if anything, he sees unique about the America that he claims to loves so much. For a man whose ideal seems to be the global village, with no barriers or differences, is there anything special about the United States that makes it distinct from other nations -- that defines it as uniquely great?

What is the distinction between the "proud citizen of the United States" and the "fellow citizen of the world." Those in Berlin heard none and many went home legitimately confused.