How about some campaign talk about education? 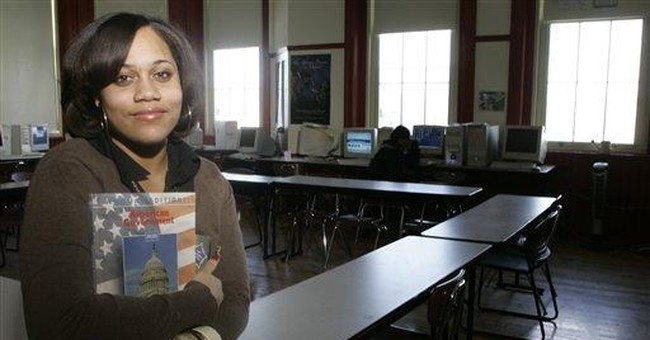 A new study shows the central importance of education in getting ahead in our country today.

In today's knowledge-driven economy, advanced education is essential. Plus, the economic returns on an advanced degree and the penalties for lack of it keep increasing.

According to the study, "Education and Economic Mobility," by Brookings Institution scholar Ron Haskins, the inflation-adjusted median family income for adults ages 30-39 with a graduate degree was 80 percent higher in 2006 than in 1964. For those with a four-year college degree, almost 60 percent higher. But incomes for those with a high-school education or less have remained virtually unchanged over the same period.

Stated otherwise, the gap in real family income between adults with a graduate degree and those with only a high-school diploma is four times greater today than 40 years ago.

The good news is that upward mobility is available to those willing to pursue and complete higher education.

This study, part of a broader initiative called the Economic Mobility Project, shows that only 16 percent of those coming from homes earning in the nation's bottom fifth income ranking remained at this level if they got a college degree. Forty-two percent moved up to earning among the nation's top two-fifths.

However, 45 percent of those without a college degree with parents earning in the bottom fifth remained at this level.

Given that most everyone's economic future is critically hinged to getting an advanced education, it's logical to ask why anyone who cared about earning potential would forgo this.

According to Haskins, "the greatest single influence on school achievement is family background."

There's a destructive circle that runs likes this. The best way to earn more than your low-income-earning parents is to complete higher education. And the most likely predictor that an individual will not get this education is that he or she comes from a low-income family.

With all the flap about job losses and earning gaps, there should be less discussion about sealing ourselves off from international competition and looking for scapegoats and more focus on the real problem -- educating our own population.

For example, our own U.S.-based high-tech companies cannot find enough qualified Americans to fill their needs, thus they both hire from abroad and also move jobs overseas. Stuart Anderson of the National Foundation for American Policy notes that, over the last four years, quotas for visas for foreign high-tech workers to work in the United States were filled on the very first day of the year. Two-thirds of graduate students at American universities in technical fields are foreign nationals.

How should we be thinking about getting our own people educated?

To start, be honest about much of the reality of low-income communities. Despite increasingly popular rhetoric that the religious right is too focused on family values and not focused enough on poverty, family breakdown is what overwhelmingly causes and perpetuates poverty. The No. 1 challenge in low-income communities is rebuilding families and discouraging behavior, such as promiscuity, that undermines the family and its future.

Once again. Family breakdown leads to economic breakdown. The children in these families most likely will not get educated and will remain poor.

Second, appreciate that widespread family breakdown is already a problem in low-income communities, so it should be a local, state and national priority to seek every creative avenue for getting children from these families on the right path and educated.

In a powerful survey of educational reform in an article in The Wall Street Journal, Sol Stern of the Manhattan Institute quotes two of the nation's top education scholars as saying that "the best hope for education improvement continues to be a maximum degree of parental choice -- vouchers if possible, but also charter schools and tuition tax credits -- plus merit-pay schemes for teachers and accountability systems that distinguish productive from unproductive school principals."

Poor education drives income stagnation, income gaps and loss of American jobs. Shouldn't our presidential candidates start talking about this real problem and what causes it?