Huckabee and Obama: A study in contrasts 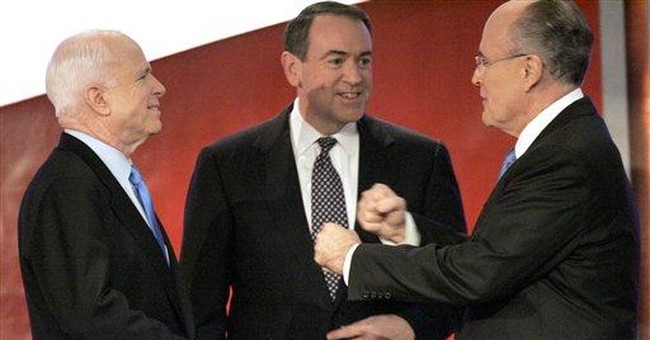 In almost poetic lockstep, Republican and Democratic caucus voters in Iowa rejected the political establishment. In picking Mike Huckabee and Barack Obama, they selected candidates who, at this time last year, conventional wisdom would have deemed inconceivable.

Beyond this common denominator, and equally fascinating, is the fact that these two candidates and two political stories are mirror images of each other. Huckabee a traditional values conservative and Obama a boiler plate liberal. And, of the leading candidates in Iowa, Huckabee spending the least money and Obama the most.

To the extent that these caucus outcomes point to the themes that will define this upcoming election, and I believe they do, we can expect a national referendum about what America is about today.

Regarding Obama, this is, of course, a great and moving story. The historic significance cannot be lost. Iowa Democrats, in a state whose population is perhaps 2 percent black, decisively picked a black man to be their candidate for president of the United States.

For anyone who follows public opinion polls, it's not news that race is no longer a factor of significance in American political choices. But to see this translate into hard reality is something else and sends a very important message to blacks and all Americans about what a great country this is.

But in understanding the Obama candidacy, we must go beyond recognizing that this is not about race. It is about who Obama is, and this is the story that will play out in this election.

I am also talking about the lines in our nation's Constitution that draw a boundary where the federal government belongs and does not belong. And the lines that define property and ownership that go beyond our Constitution and reach to our ancient truths and traditions (Thou Shalt Not Steal).

The lines from our traditions that provide crucial direction for managing our own selves (Thou Shalt Not Covet) and the crucial line that defines the very beginning of life.

Unfortunately, these are lines that liberals, and Sen. Obama is certainly one, no longer see as relevant. If getting rid of these lines is what he and his enthusiasts mean by change, we'll have a chance to see what our nation at large thinks about this.

Everything that Sen. Obama is not, Mike Huckabee, the former Arkansas governor, is.

The story in Iowa was the large and enthusiastic turnout of evangelical Christians and their unequivocal support of him.

Huckabee's trouncing of Mitt Romney, despite being outspent by a factor something like 15 to 1, is a great political story. It has turned doubters into believers and it's now appreciated that he is a real and viable national candidate. The "Huckaboom" has been evident in that he has soared in national polling along with his emergence in Iowa.

I found it particularly rewarding that Huckabee even finished first among Iowa Republicans who said that their number one issue was terrorism.

Clearly the man is touching Americans. The plethora of televised national debates played a critical role, making it possible to get to know him without his having to have tens of millions on hand to spend on ads.

The road out of Iowa is, of course, long and many chapters remain after this first one.

There's a lot of talk about an independent run -- possibly Michael Bloomberg.

To the extent history tells us anything, third party candidates only serve to be spoilers. But I don't think this is what this about anyway.

I don't believe Americans today are looking for political technicians. I think they want to reach down, rediscover, and re-embrace the principles that have made this such a great nation.

I see a hint of prevailing sentiment in a Gallup poll of last week asking voters how important a consideration "family values" will be in their selection of a candidate. Seventy five percent replied either "extremely important" or "very important."

Huckabee and Obama are studies in contrasts that draw a line that will define this election. Stay tuned.