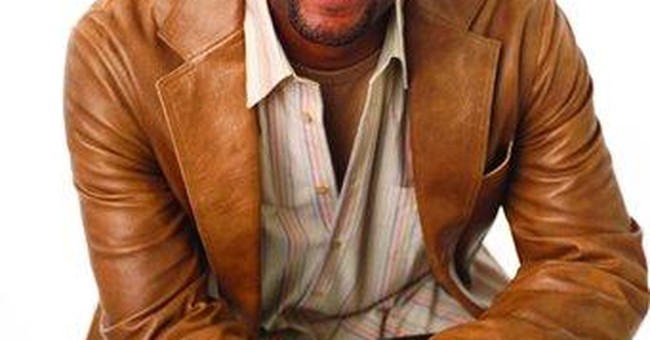 The top four Republican candidates have announced they won't make it to his PBS-sponsored debate at Morgan State University on Sept. 27.

Now Smiley is using the occasion to assert that Republicans feel it's OK to "ignore people of color" and to call out black Republicans as disingenuous in claiming that their party can really be a home for blacks.

To those black Republicans, Smiley says: "I don't wanna hear it anymore. If you want black folks to take your party seriously, then your party ought to take black folks seriously."

Look, if anyone is being disingenuous here, it is Smiley.

Last week these same top four GOP candidates didn't make it to the Values Voters debate. Twenty-five percent of the nation's voters are evangelical Christians. Do we conclude that Republicans are ignoring them?

With a little sober analysis, it's not hard to understand that, with elections now starting two years before the fact, and debate invitations from every group except the local Boy Scout and Girl Scout troupes, candidates have tough decisions to make regarding the use of precious time and money.

But Smiley isn't looking for sober analysis. He's looking for a reason to nail Republicans and show blacks that they don't care about them. So, rather than taking the heat himself for a poorly conceived event, first thing on his agenda has been to make the rounds to shows like Tom Joyner's, with huge black listening audiences, to badmouth Republicans.

Any wonder that Republicans might have some reservations about this guy?

But let's look a little closer.

If Smiley doesn't appreciate that the politics of primary season are much different from general-election politics, then you've really got to wonder what is going on with him as an analyst.

Primaries are about parties reaching into their own ranks to pick their nominees.

So it's no surprise that all the Democrats showed up for Smiley's PBS debate for them a few months ago at Howard University. Ninety percent of the black vote is Democratic, so this is a key base for the party.

Of course, they have to show up and pitch this crowd. Particularly this year, when one of the two leading Democratic candidates is black.

But why, when barely one in 10 Republican voters is black, would it be a good use of candidates' time, when they are battling each other for their party's nomination, to court blacks? The time for reaching across the divide is during the general election, not in the primary struggle.

Surely Smiley understands this basic reality that he is distorting into something else.

On top of this, he's got an event that is transparently set up for Republican failure. The host, Smiley, is a liberal, the sponsoring venue, PBS, is liberal, and the journalists selected to do the questioning -- Cynthia Tucker, Juan Williams and Ray Suarez -- range across the spectrum from left to center. There's not a conservative to be found.

Among the only possible beneficiaries of such an event would be the second-tier candidates, who can use the publicity. The other beneficiaries are Smiley himself, who gets to look important if Republicans come, and Democrats in general, who stand to benefit from Republicans showing up at a forum that is not neutral.

So why would leading Republicans show up at an event that has little tangible benefit in their current pursuit of their party's nomination, an event set up to make them look bad?

Smiley's campaign to distort reality and use it as an occasion to attack Republicans is proof enough that leading GOP contenders were prudent and reasonable to not participate in this event.

Fact is, Smiley himself, who has a TV show, produces events and writes books targeted to blacks, has plenty of opportunities to give exposure to black conservatives. But he never does.

The agenda he promotes, and the analysts he showcases and to whom he gives credibility, are uniformly on the left.

Latest is his "Covenant with Black America." At a time when more and more blacks are beginning to appreciate that the problems in their communities are based in social and moral breakdown, with black-family collapse, and the problems concomitant with this, Smiley gives zero airing to this problem, and his Covenant does not provide a platform to a single black conservative.

Yet, now he postures that he's giving Republicans a shot at his community by offering them a few sound bites in a primary debate with little import.

As they say in our community, Mr. Smiley, get real.