Are We Going the Way of Rome? 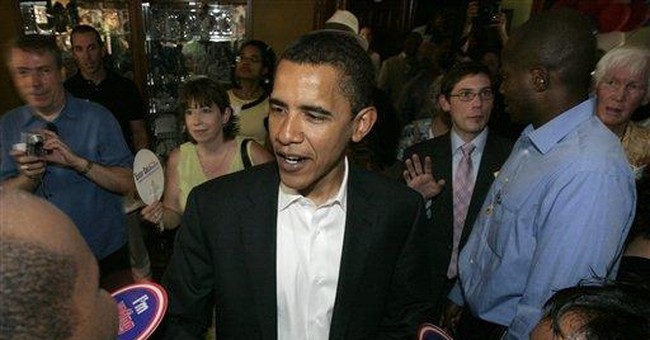 "Are We Rome?" asks a new book, authored by an editor at Vanity Fair magazine. The subtitle is "The Fall of an Empire and the Fate of America."

It seems, given the dour mood of the country, that this would be a good time to market such a book. And, indeed, as I check its sales clip on Amazon, it seems to be moving at a brisk pace that must please both author and publisher.

So, is America creaking and crumbling like a latter-day Rome?

If it is, the word hasn't gotten to our financial markets. Stocks are booming, interest rates, inflation and unemployment are low, and companies are making money.

Usually this is the formula for a happy electorate. But, for some reason, not now.

A recent New York Times/CBS poll shows pessimism extending among our young people. In a survey of 17- to 29-year-olds, 70 percent said the nation is on the wrong track.

These young people, looking for change, are helping fuel Obamaphoria. In the Times/CBS poll, Sen. Barack Obama, D-Ill., was the candidate about whom they expressed the most enthusiasm. They surely are an important source of his large number of low-dollar and online contributors.

But what is driving the dissatisfaction?

Certainly, there is unhappiness about the war in Iraq. We hear comparisons to Vietnam. But let's recall that the death toll in Vietnam, when the protests got most intense, was far beyond the 3,000-plus casualties we have experienced thus far in Iraq.

By the time we exited Vietnam, we had lost more than 50,000 of our soldiers.

But why would unhappiness about our engagement in Iraq cause half of younger Americans to say they will be worse off than their parents?

Here's one hypothesis about what may be affecting the general mood. People feel rattled when they feel a loss of control.

One thing that Americans have done over the years is turn more and more of their lives over to others to control. This is reflected in the growth of government.

In actuality, government is taking more than a third today because our accounting is not fully reflecting the huge over-commitments in Social Security and Medicare. According to a recent paper by economists from the Cato Institute and the University of Pennsylvania, we'd need a payroll tax of 14.5 percent, more than double the current tax, to cover these obligations.

Along with the growth of government, there has been a dramatic shift from local and state control to the federal government.

All of this means two things. First, a large portion of our lives today is politicized and run inefficiently. One of the reasons that our free economy works so well is that businesses change as times change. But once a government program starts, entrenched political interests make change almost impossible. Consider President Bush's aborted effort to fundamentally reform Social Security.

So is Rome and decline in the cards for us?

I think we'll be OK if we don't forget how we got successful and what drives failure. Our success has come from freedom and letting individuals take responsibility for their own lives. But failure comes when we lose the humility required of freedom and turn to prideful notions that we can design government programs that solve life's problems.

For guidance here, we must turn not to history but to Proverbs.

"Pride goes before destruction and a haughty spirit before a fall."