The Democrats' own brand of racism 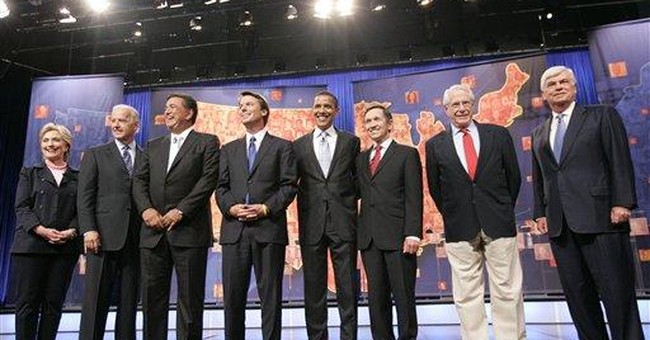 Watching the recent PBS-hosted Democratic presidential debate at Howard University, I was impressed with the uniformity of the messages communicated to the mostly black audience. I felt like each candidate was reading from one script, making a nuanced change here and there so there'd be some differences between them.

Every problem -- black unemployment, education, crime and incarceration, AIDS -- had one answer. More government programs and spending. There is simply nothing you could have asked any of these Democrats that would not have gotten this same answer.

It's like blacks do not exist as individuals. According to this Democratic presidential line-up, which got plenty of encouragement from the audience at Howard, there is not a single way that black lives could be improved by enhancing individual freedom and personal responsibility.

Nothing speaks to this more clearly than the responses to a question from Michelle Martin of NPR about HIV/AIDS. She pointed out that black teenagers, although just 17 percent of the overall teen population, account for 69 percent of teen HIV/AIDS diagnoses.

The question: How "to stop and to protect these young people from this scourge."

Uniformly, the answers were about, of course, increasing government spending on AIDS programs.

Now there is no question that we have an obligation to figure out how to meet the demand for treating those that are afflicted. But that wasn't the question. The question was how "to stop" the scourge.

This was an instance where Sen. Hillary Rodham Clinton of New York truly distinguished herself. Needless to say, she ticked off the usual list of spending proposals. But the leadoff was key. Clinton was the only one to suggest a connection between HIV/AIDS among blacks and racism.

"If HIV/AIDS were the leading cause of death of white women between the ages of 25 and 34, there would be an outraged outcry in this country."

It was as if the senator simply couldn't wait to lay this line of shameless pandering on her black audience. And it certainly worked. She got resounding and spontaneous applause of approval.

I wonder how many young black Howard University students were present to watch their elders, many distinguished black leaders, endorse Clinton's dismissal of black responsibility for their own lives.

It is no mystery that HIV/AIDS is a sexually transmitted disease. And it should be no surprise to expect it to be more prevalent among populations that are more sexually promiscuous.

A study released within the last few weeks by the National Center for Health Statistics, a branch of the Centers for Disease Control and Prevention, reports the sad and grim data that blacks are indeed far more sexually promiscuous than whites.

The damage caused by irresponsible sexual behavior goes beyond the pain and suffering of sexually transmitted diseases. It touches every aspect of the quality of one's life. Single-parent homes are the homes most likely to be poor. Poverty, and the host of problems associated with it, is also disproportionate in the black community, as is the incidence of HIV/AIDS.

It is most reasonable to trace the preponderance of problems that are tearing up black life in our inner cities today to irresponsible sexual behavior.

I am sure Clinton, and her fellow Democrats, can come up with an explanation as to why racism drives a black man to have 10, 20 or 30 sexual partners, and to abandon the children that he fathers. But this is itself racism, because it dismisses that blacks can take control of their own lives.

But blacks can take control of their own lives. We have many successful blacks in our country today who demonstrate this fact. But to do so in our troubled neighborhoods takes promoting an agenda that, unfortunately, is quite apart from what our Democratic line-up has interest in.

In general, it is to understand that we need to get traditional values communicated to young blacks. In particular, to appreciate that the most effective way to do this today is vouchers and school-choice opportunities to allow these kids the option to attend church schools.