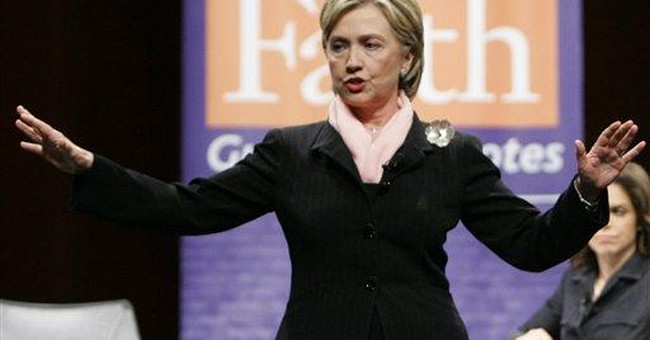 I assume that Senator Clinton's campaign hopes that most folks will not read "Her Way," by New York Times reporters Jeff Gerth and Don Van Natta, Jr., or the New York Times Magazine article adapted from the book, "Hillary's War."

Anyone that does will appreciate the transparently false picture that the Senator is transmitting about why she voted in 2002 to authorize going to war in Iraq.

The Senator's vote has become a point of discussion because of her reluctance to clearly explain her thinking then. Unlike Senator Edwards, she refuses to simply say she was wrong and express regret.

On the other hand, there has been no clear statement that at the time it was the right decision. One may assume that the latter is unpalatable for her because it would give credibility to President Bush.

Clearly, since that vote something has changed. She recently voted with only 13 other Senators to deny the additional emergency funding in support of the war effort that the President requested.

In one sense of consistency, we expect liberals to be allergic to personal responsibility and to seek every opportunity to be the victim. Here, Senator Clinton does not let us down.

Her story now is that she voted for the war, but it's really not her fault that she did.

George Bush lied to her.

According to Clinton, she thought that the resolution she was voting for meant that a new round of UN inspectors would be sent into Iraq. But, she was snookered.

As she put it in the debate the other night, "What I did not count on....is that he (Bush) had no intention to allow the inspectors to finish the job."

Now, as Gerth and Van Natta point out, the war resolution contained no directive for further UN inspections in Iraq. It left it to the president's discretion to determine if this approach was working, to assess Saddam Hussein's compliance, and to resort to invasion as an alternative.

Senator Carl Levin offered an amendment that would have required additional UN action and required the president, if the UN diplomacy failed, to return to congress for authorization for a unilateral war initiative.

But Clinton, who now claims that more diplomacy was key, voted against this. And, as the reporters go on, "Clinton has never publicly explained her vote against the Levin amendment or said why she stayed on the sidelines as 11 other senators debated it for 95 minutes that day."

The day before Senator Clinton voted for the war resolution, she spoke on the floor of the Senate and talked about "intelligence reports" describing Saddam's rebuilding his WMD stock and about Saddam giving "aid, comfort, and sanctuary to terrorists, including Al Qaeda members."

Former President Clinton, husband of the Senator, was, according to the reporters, her chief counsel on the war vote. They quote him saying at the time, "Mark my words, he will develop weapons of mass destruction....He will deploy them and he will use them."

After returning from a trip to Iraq in 2003, Senator Clinton spoke at the Council of Foreign Relations in New York about the situation, saying that "We have no option but to stay involved and committed," and calling her vote "the right vote" and one "I stand by."

Clinton appeared on Meet the Press during a 2005 trip to Iraq, and, again according to Gerth and Van Natta, continued to express confidence in the effort, and opposed withdrawal or a timetable. "We don't want to send a signal to insurgents, to the terrorists, that we are going to be out of here at some, you know, date certain."

The issue here is not making mistakes. The issue is being honest and taking responsibility.

Senator Clinton, in what should be of concern to us all, seems to have a problem with both.

It is simply nauseating to hear from someone who aspires to be president of the United States what we heard from Clinton at the New Hampshire debate. "...this is George Bush's war...He started the war. He mismanaged the war. He is responsible for the war."

There would have been no Iraq invasion without authorization from Congress. Clinton's vote was part of that authorization. It was her war as it was George Bush's war.

Senator Clinton may have not read the National Intelligence Estimate, as she has admitted, before voting for the war. But she certainly was reading the polls. At the time of the vote on the Iraq war, President Bush's approval was at 70 percent.

She was aware, awake, conscious, sober, and responsible when she cast her vote.

Did You Miss What Bill De Blasio Did to the NYPD? It's the Price You Pay for Caving to the Mob.
Matt Vespa
Was Scientist Purged From Her Post Because of Ties to Trump Administration? Two House Republicans Think So
Leah Barkoukis
There's a Collusion Story the Media Is Burying...Because It's True and Makes Biden Look Bad
Matt Vespa
Squad Members Attack Israel As Hamas Rockets Rain Down, Because of Course
Spencer Brown