Getting perspective on Imus and Duke 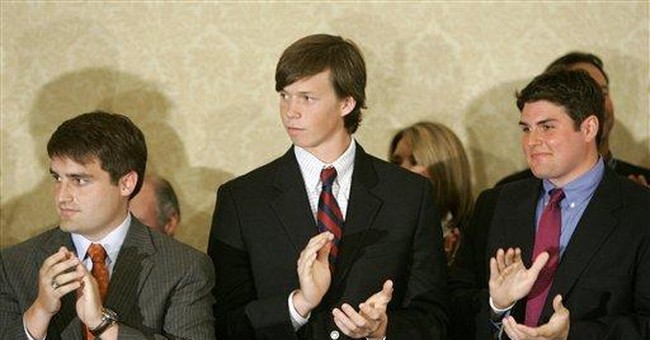 In the same 24-hour period, NBC pulled its MSNBC broadcast of the Don Imus show as a result of his racist slurs aimed at the Rutgers women's basketball team and the attorney general of North Carolina dropped all charges against three white former Duke University lacrosse team members of alleged sexual assault against a black stripper. Shortly thereafter, CBS cancelled Imus' radio show.

It was a good day for college athletes, white and black, more well-to-do and less well-to-do, male and female.

And it was a good day for freedom and justice in America.

Actually, I wish it were so simple. But, it's not. Both cases leave a shadow and unpleasant aftertaste that should concern anyone who cares about the quality of our lives, our freedom and the direction in which we're headed.

Sure, I'm glad to see justice done in North Carolina, and I'm sickened how racial exploitation was used to politicize the law and undermine due process. I'm also sickened by the mindless, unprofessional behavior of 88 members of the Duke faculty who thought it was their affair to inject their unwelcome, and now clearly uninformed, 2 cents into a legal case that had nothing to do with their jobs.

But I also stand by the column that I wrote earlier about this sordid affair, expressing concern that, regardless of the merit of the charges that were brought against the young men, party fun for these Duke athletes consisted of hiring and being entertained by strippers.

When indeed higher education has nothing to do with the transmission of values and the building of character, and is only about passing tests that open career doors, why should we be surprised that we wind up with a society that thinks Don Imus is funny and handsomely compensates those in the abuse-and-exploitation business?

Regarding Imus, I'm glad he got canned.

I know quite well the abuse that black women have to tolerate. So having one less source of vulgarity around fueling these sleazy flames is just fine with me.

But let's make sure we've diagnosed the disease correctly, or we're going to come up with the wrong cure.

The extent to which we handle race as a political rather than a moral problem, we're going to get it wrong.

Who, after all, is going to define the rules of engagement? Al Sharpton? Jesse Jackson?

Both were part of the problem in the Duke case. Both were more than glad to feed the racial flames and both were dead wrong.

Jackson wrote at the time, totally inaccurately, in his column, "We know that the two women were abused."

At the outset of the case, Sharpton told Bill O'Reilly, "I think there are certainly a lot of racial factors .... where this girl has basically had a character charged in the media, there's a lot of racism that's in the air .... I think that when the prosecutors went forward, they clearly have said this girl is a victim."

The relish with which both Jackson and Sharpton embraced the portrayal of this clearly problematic young woman as a poor, divorced mother trying to put herself through school was not only a disservice to justice, but a disservice to the girl and to blacks.

So are these two the ones that we are going to put in charge of the First Amendment? Are they the ones who are going to determine what can or can't be said and who will set our standards for civility?

Yet, somehow, two charlatans on one case have been transformed into high priests of virtue on another.

The House will soon consider HR 1592, the Local Law Enforcement Hate Crimes Prevention Act of 2007. The legislation will expand the scope of and funding to prevent so-called hate crimes.

Hate-crime legislation does not prevent a single violent act that is not already prohibited by law. What it does is provide a venue to politicize law by opening the door for politicians to control words and thoughts of private citizens to predetermined political ends.

Did anyone notice, for example, outrage from Jackson or Sharpton about Harry Belafonte's remarks calling Condoleezza Rice and Colin Powell "house slaves"?

With the passage of this so-called hate-crime bill, pastors will be intimidated to condemn homosexual behavior from their pulpits. Is this the freedom we want?

George Washington had it right. "... Let us with caution indulge the supposition that morality can be maintained without religion ... It is substantially true that virtue or morality is a necessary spring of popular government."