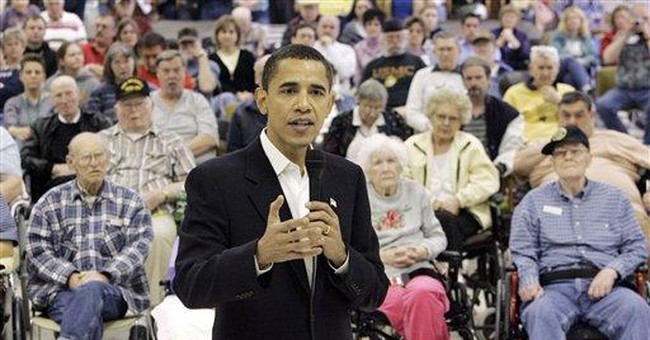 The news that Barack Obama raised nearly as much money in the first quarter as Hillary Rodham Clinton, and raised these funds from a broader and deeper base, is indeed impressive.

One of the real reasons to have questioned Obama's bona fides from the outset was his lack of experience. But running a national campaign itself says something about a candidate's management talent, and Obama, from this perspective, is proving himself.

In addition to reporting having raised some $25 million in the first quarter, other news of the last week that obviously made the Obama campaign happy was the Rev. Jesse Jackson's stepping out and formally blessing its candidate.

So, is the Illinois senator now both black enough and presidential enough?

Frankly, I think what Obama is, to recall the Sade hit of a number of years ago, a smooth operator.

American voters, Democratic as well as Republican, are simply unhappy with the Washington political establishment, and Obama's campaign is about using his personal qualities and outsider credentials as a new face to ride this sentiment.

We've just come out of a stunning electoral upset in the congressional elections; two houses of Congress flipped parties, and yet public sentiment has barely changed.

Seven out of 10 Americans polled said that the country is going in the wrong direction, and three out of 10 gave positive approval ratings to Congress.

This is exactly where these numbers were before the elections, and before Senate Democratic leader Harry Reid and House Speaker Nancy Pelosi took hold of the reins of congressional power.

Money is a big deal in politics, and a huge advantage in raising the cash is having the organization and relationships in place to do it. The fact that rookie Obama is going neck and neck with the New York senator, who has a massive organization advantage, stemming both from her own years in politics and from her husband's legacy, is nothing short of astounding.

The well-publicized Pew Center analysis of several weeks ago showed a growing gap between pro-Democratic and pro-Republican sentiments _ now about 15 percentage points to the favor of Democrats.

The Obama phenomena is an outcome of all this.

Americans are unhappy with Republicans in particular and with the Washington establishment in general.

Is it possible for a candidate to make it all the way to the White House by just looking good, sounding good and by being new at a time when the public is simply unhappy with the old?

History, our own and others', says yes. Many elections, and revolutions, have turned power over to skilled, ambitious politicians who have little new to offer other than just being different.

At a time when there is good reason for Americans to be ticked off, the cost of such an outcome will be high.

Simply from a black perspective, the cost of such an outcome will be high.

One fourth of blacks are entrenched in poverty at twice the national average, and so far we have not a single reason to believe that Obama has a clue, or even an intention, about seriously dealing with this problem.

The senator's campaign Web site, for instance, says practically nothing about education. Nothing is more central to the future of those one in four blacks living in poverty than education.

New regulations just announced under No Child Left Behind will triple the number of children in special-education programs that can be given easier tests than those generally administered to measure educational progress. The fact is that most of these kids, with supposed learning disabilities, are minorities.

Their real disabilities are coming from broken homes and being sent to public schools that have no chance of serving their unique needs. The hard and sad truth is that now we have another reason to push these kids aside while we measure how middle-class kids who come from healthy homes are doing.

Inner-city public schools are feckless, hopeless disaster zones. The chances that government bureaucrats will fix them and serve the needs of poor kids from broken families are zero. What will happen is that more and more will be swept under the rug, as in these new regulations, and that the situation of the one-quarter of blacks entrenched in poverty will become increasingly dismal.

As astounding as Obama's fund-raising success is, it is equally astounding that he has been able to do it by being virtually indistinguishable from Clinton on issues. And how he can run as a breath of fresh air without putting a single new, creative idea on the table.

How about vouchers for inner-city schools, senator? Americans, black and white, need steak, not sizzle.