Time magazine gets it wrong 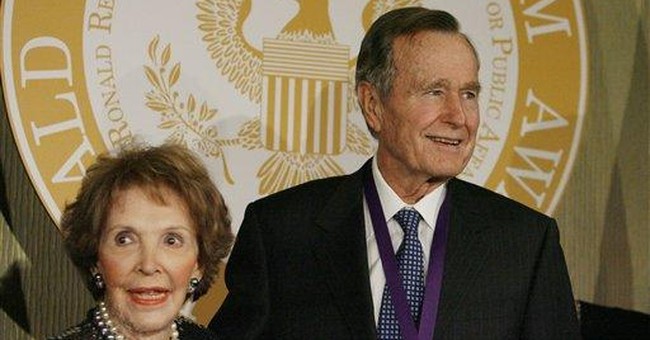 The liberal media are having a field day trying to portray the Republican Party and conservatives in disarray. The crescendo has reached a new peak this week with Time magazine's cover picture of Ronald Reagan with a tear on his cheek.

But Time's story, "How the Right Went Wrong," is a superficial and simpleminded caricature of what is going on with Republicans.

First of all, as anyone with a passing awareness of political history knows, Reagan himself had anything but a cakewalk in reaching the leadership of the party and the presidency. His landslide victory in 1984 was the culmination of years of political struggle within his party. The beginning of his ascendance into national politics began 20 years earlier with his nationally televised speech in 1964 in support of the Barry Goldwater candidacy.

The idea that anything as American as differences of opinion within a party and political struggles for leadership would bring Reagan to tears is a joke. The only tears about his party and this country that he shed were tears of joy to be part of this great, free country.

So as we approach an election year with an outgoing second-term president, and a vice president who is not stepping forward for his party's nomination, intra-party strife, as competing candidates try to define their own uniqueness, is as natural and American as apple pie. Ronald Reagan would have been perfectly at home.

It is actually not Republicans who are confused, but Time magazine.

When Reagan said, in 1985, that the "other side" was "bankrupt of ideas," he was right. He meant that Democrats had no answer to the challenges this country was facing other than the big-government materialism that had already been shown to be the problem, not the solution.

This is as true today as it was 20 years ago.

It is also true that the ideological core of the Reagan revolution _ traditional values and limited government _ points the way to our future as much today as it did then. And Time's reporters or anyone else would have a hard time finding conservatives who would question this.

So you have to wonder what world Time's reporters are living in when they write that "everything that Reagan said in 1985 about 'the other side' could easily apply to the conservatives of 2007."

What Time's reporters do not seem to understand is the difference between the challenge of finding the best, hopefully a great, leader and not knowing who you are.

Of course there are differences of opinion within the Republican Party, as there were during the Reagan years.

But regarding first principles, you just have to ask Republicans and Democrats who they are, and it is clear they know and that the core differences are not much different than when Reagan talked about "the other side" 20 years ago.

In a survey done a few weeks ago by the Pew Research Center, Republicans and Democrats were asked what traits they were looking for in candidates.

In general, Republicans consistently poll in the direction of lower taxes and more limited government, as compared to Democrats.

On health care, an issue central to defining what the future of this country will look like, according to a recent CBS/New York Times poll, 62 percent of Democrats as opposed to 27 percent of Republicans think we should have a single-payer government-run health-care system.

If journalists want to examine party disarray, perhaps they should be asking what it tells us about the state of the Democratic Party that Sen. Barack Obama, an unknown, with barely two years' experience in a major political office, can be a serious candidate for its nomination for president.

Leaders are not made with cookie cutters. As the historian Carlyle said, "The history of the world is nothing but the biography of great men."

The right did not go wrong, as Time would have it. Conservatives have no identity crisis. We're just in search of that leader who is as great as the agenda.

Ridiculous: How Dr. Seuss Enterprises Caved to the Outrageous Shrieks of the Woke Mob
Matt Vespa

Gavin Newsom's Reaction to Texas Reopening Is a Sight to Behold
Townhall
President Biden says that his hope is that America might return to normal 'by this time next year'
Twitchy
She Persisted: Kayleigh McEnany's Future Plans Are Revealed, and the Left's Meltdowns Are Hilarious
Redstate
31 Missouri Judges Recuse Themselves from Lawsuit Alleging Family Court Guardian and Psychologists Orchestrated Money-Making Scheme
PJ Media