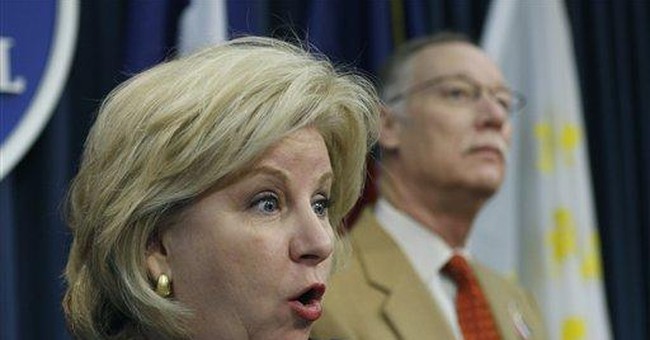 The current controversy surrounding state initiatives to mandate vaccination of preteen girls with the human papillomavirus (HPV) vaccine sheds light on what is wrong with our health-care system.

The great economist Milton Friedman pointed out the problem. Noting that everything seems to get cheaper while health care keeps getting more expensive, Friedman explained that the problem is that the person buying health care is most often not who is paying for it.

Most medical services today are paid for either by insurance companies or the government. In fact, The Wall Street Journal recently reported that government now pays for 45 percent of our health-care bills.

If you don't know the price tag of what you are buying, how can you know how much to buy? And, if someone else is picking up the tab, how do you know when to stop?

A few days ago, pharmaceutical giant Merck announced that it was pulling the plug on its nationwide lobbying campaign to get state legislatures to mandate that preteen schoolgirls receive its vaccine, Gardasil. It protects against some strains of HPV that may lead to cervical cancer.

Company officials stopped the campaign because of a nationwide backlash fueled by concerns that it is premature to mandate a new vaccine that has many unresolved questions regarding efficacy and safety; and that, in any event, it should not be mandated because the virus is transmitted through sex and not through casual contact, and that parental rights were being violated.

The Merck spokesman who announced the decision said: "Our goal is about cervical-cancer prevention, and we want to reach as many females as possible with Gardasil."

Who would question the goal? But the spokesman left out two key points. At what cost? And who makes the decision to purchase the vaccine?

Merck's answers here are simple. Regarding cost, as much as it can charge. In this case, about $400, or about eight times the cost of a measles vaccine. Regarding who makes the purchase decision, its preferred answer is the government.

It's straightforward that bigger, heavier cars are safer than smaller, lighter cars. But they are also more expensive and consume more gas.

Certainly safety is a major factor considered when a family purchases a car. Family members will evaluate their ability to pay for more size and more gas in order to get more safety. In the end, they will make a decision that reflects their own tastes and tradeoffs. They might even wind up driving more carefully as result of buying a smaller, lighter car than they might have preferred.

Suppose, however, a politician decides that we can't leave these decisions to individual consumers, but, in the name of public safety, government will mandate that everyone must buy a bigger, heavier car. And if you can't afford it, the government (i.e., taxpayers) will pay for it.

Do you suppose the result will be poor decision-making and a lot of waste?

Are you beginning to understand why our health-care system is such a mess?

What might parents consider regarding the HPV vaccine? There were 3,700 fatalities in 2006 from this disease, which, as The Washington Times points out, is less than 1/100th of 1 percent of the U.S. population of women over age 18.

Furthermore, the risk of exposure can be reduced to the realm of the remote simply by avoiding sexual promiscuity.

Given this picture, anyone who wants to pay Merck $400 and vaccinate a daughter should be free to do so. But, does it make any kind of economic sense for the government to mandate that every girl must be vaccinated, regardless of who she is, how she behaves, who her parents are and what they can afford and prefer?

Furthermore, would we even be talking about this possibility if the cost of the government mandate wouldn't be simply passed through insurance companies, who will then raise rates, and government programs paid for by taxpayers?

It's interesting to compare two corporate exercises in crisis management over the past week. One was Merck's handling of the backlash against its lobbying effort. The other was the backlash against Bank of America's new policy of making credit cards available to illegal immigrants.

The financial institution's CEO wrote a long op-ed in The Wall Street Journal explaining the decision and why it was going to continue the program.

Where was Merck's CEO? There was only a brief announcement by a mid-level spokesman that company officials were ending the lobbying campaign. There was no statement about whether they felt they were right or wrong in the first place.

What's the difference? Bank of America answers directly to consumers. Merck customers are politicians and bureaucrats.

This is what is wrong with our system. And this is the universal health care that Hillary Rodham Clinton and Barack Obama have in store for us.

'A Shift in the Issue Environment': NYT Has a Warning for Democrats
Townhall
'Cretinous Freak' Rex Chapman tries to DUNK on Trump over fundraising during Hurricane Ian, but it goes very wrong ... OUCH
Twitchy
Lost in Space
Redstate
The Morning Briefing: Fascist Creep Factor for Biden's DOJ Gets Worse Every Day
PJ Media