The perverse politics of Gardasil 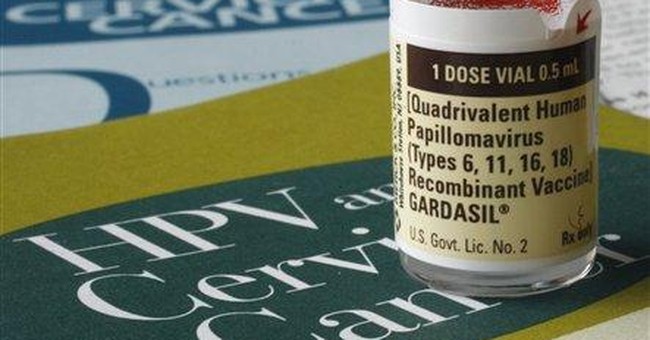 Watching politicians and corporations shoot themselves in the foot, you get to taking seriously theories about drives to self destruction. The trouble is that when these folks do it, they tend to take the rest of us with them.

Such is the case now in the 20 state legislatures considering bills to mandate that pre-teen school girls be vaccinated with Gardasil, a new vaccine against certain strains of human papillomavirus (HPV) that can cause cervical cancer. These initiatives are being shepherded by lobbying campaigns by Merck, the pharmaceutical giant that developed the vaccine.

A vaccine that prevents cervical cancer sounds great. But this is a free country. Remember? Unless there is a compelling reason to use government to mandate, Soviet-style, use of a particular product, then medicines, like all products, should be sold on the free market. Consumers can buy them if they want them.

Not only is there no reason to mandate the use of Gardasil, but the reasoning being used to justify its mandated use is perverse. Among the destructive consequences will be that girls who are most at risk, those who are poor, usually minorities, will be hurt more than helped.

Government mandated vaccines for communicable diseases, like measles, where an infected child can put others at risk, are justifiable. But the HPV virus which may lead to cervical cancer is spread through sexual contact. It is, as Dr. Jane Orient, executive director of the Association of American Physicians and Surgeons, aptly put it, a "lifestyle disease."

Where are we going as a country when we start mandating vaccines against diseases resulting from behavior we choose?

And where are we when we consider sexual behavior to be private, but its consequences public?

Of course, by bringing in the strong arm of government, and forcing mandatory vaccination, a whole population of girls gets dragged into the picture whose families would never choose to use the vaccine nor could they afford it. That is, those from poor and minority homes.

Merck has to love this picture. They don't just get guaranteed purchases from those whose insurance companies will foot the bill. But they'll also get state and federal governments to pay for the low income kids who, if left alone, would never be their customers.

The main risks that these girls from low-income families face stem from their promiscuity.

Blacks account for 50 percent of new AIDS cases, are 18 times more likely to contract a sexually transmitted disease than whites, and are regularly at risk of death through homicides, suicides and accidents that plague these communities.

Blacks are twice as likely to die before the age of 20 as whites.

It is the collapse of family and values and the attendant sexual promiscuity that drives the deadly poverty cycle in these communities. So mandating Gardasil vaccine for these girls is to validate a lifestyle that is already killing them in order to address a risk that is among the least of their problems.

There are a host of other reasons to be perplexed by the rush to mandate this vaccine.

This is the most expensive vaccine in history (nine times more expensive than a measles vaccination), the incidence of deaths from cervical cancer are miniscule (.65 percent of the annual deaths from cancer in the U.S.), and the vaccine is only eight months on the market with many legitimate concerns, such as side effects and long-term risks and costs, yet to be clarified.

How about the particularly strange situation in Texas? Gov. Rick Perry, a conservative Republican governor, was so anxious to mandate Gardasil vaccinations he by-passed his own legislature, much to its consternation, and with practically zero public debate has done this via executive order.

Could the fact that the Governor's ex-chief of staff is Merck's lobbyist in Austin be relevant here? Or maybe that a government mandate would insulate Merck from exposure to future lawsuits from unforeseen problems with the vaccine. Or, possibly the fact that GlaxoSmithKline is close to bringing a competing vaccine to market explains some of the rush.

Merck advertises itself as a company "where patients come first." But if Merck were really placing its patients first it would not be trying to get government to force them to use its product.

It would be obscene to trivialize the 3,700 expected deaths that occur nationwide each year from cervical cancer. But to mandate use of this vaccine would violate rights of parents and children and justify behavior that leads to more death, pain and problems than caused those by cervical cancer.

'A Shift in the Issue Environment': NYT Has a Warning for Democrats
Townhall
'Cretinous Freak' Rex Chapman tries to DUNK on Trump over fundraising during Hurricane Ian, but it goes very wrong ... OUCH
Twitchy
Lost in Space
Redstate
The Morning Briefing: Fascist Creep Factor for Biden's DOJ Gets Worse Every Day
PJ Media