Thinking About Iraq on King Day 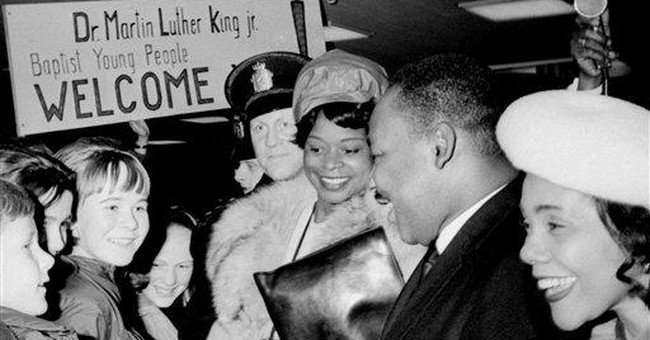 The characteristic of greatness - whether we are talking about a great man or great art - is that it transcends time and place. It dips into that which is universally and eternally true and applies those truths to a particular moment and a particular place.

Re-reading, after many reads, Dr. Martin Luther King's words of Aug. 28, 1963, the famous "I Have a Dream" speech, his greatness rings clearer than ever.

Because King did indeed touch the heavens on that day and pull down kernels of eternal truths about freedom and the condition of man, those words of 40-plus years ago have relevance to our struggles today. They can serve as guidance in these difficult times.

Am I saying that King's message from 1963 can guide us in today's conundrums _ about our embroilment in Iraq, about the Middle East, about America's role in the world? Yes, I am saying this.

The power of King's message, the unquestionable reason that the movement he led was successful, was his appeal to the truth of freedom and its universal applicability to all men.

By identifying and appealing to the freedom of man as a universal and eternal truth, and going on to make clear that this truth defined what this great country is about, then King's conclusion _ the intolerability of conditions that denied any American full participation in this freedom _ could not be denied.

Beyond this central message, King made other very important points in this speech.

Although the responsibility clearly was in the hands of those Americans with power, overwhelmingly white Americans, to fix the problems in the country that limited the availability of freedom to all, this did not mean that all those same Americans were racists or had caused the problem to begin with.

The responsibility for fixing these problems came, rather, with being the beneficiaries of a country whose destiny and identity was fundamentally linked with the enterprise of freedom.

He appealed to blacks not to allow suffering to translate into bitterness nor into categorical hate of white Americans. "Let us not seek to satisfy our thirst for freedom by drinking from the cup of bitterness and hatred."

Instead, King exhorted black Americans to "Continue to work with the faith that unearned suffering is redemptive."

So Dr. King accomplished a lot of business that August day in 1963.

He recognized the universal truth of human liberty. He recognized our country as a unique vessel of that truth. He appealed to Americans with power to assume their responsibilities as the beneficiaries of liberty to make this a better and freer country. And he appealed to black Americans to assume a different kind of responsibility _ to not allow themselves to be destroyed by unearned suffering but to be redeemed by it.

The prophet is a lonely man because he brings a message that people do not want to hear.

Dr. King's activism was not welcomed by most whites and a good many blacks.

There is natural appeal in the inertia of the status quo. Change and assumption of new responsibilities and challenges are welcomed by few.

Turmoil tells us that something is wrong and we have no choice but to open our eyes and ears and assume the responsibilities that are cast upon us.

I am, of course, not a military tactician and am in no position to speculate about how best to use American troops to midwife a portion of the world that clearly needs help in becoming more modern, more civil and freer.

However, I can say, that I am in complete sympathy with our president who senses that America has a unique and special role to play in this world. We cannot shirk responsibilities that are clearly ours.

I cannot help but think that it is not an accident that the United States stands so alone, despite many other nations that claim to have similar commitments to and stakes in civility and liberty. The way they act makes clear that they don't.

The truths that Dr. King articulated in so crystal clear a way in 1963 continue to resound today. Freedom is what this country is about. We have no choice. It is our heritage. We thrive and prosper from it. And we cannot avoid the responsibilities that come with it in our engagement with the rest of the world.