The Left’s Cheap Sale of its Soul: "But Bush Did It!" 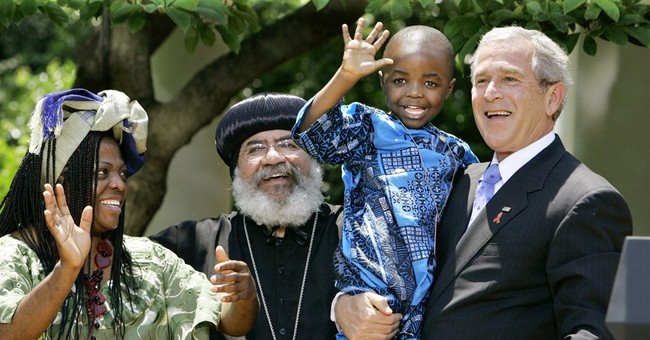 The Left’s go-to defense of this administration’s sins--“But Bush did it!”—has some problems. Start with: It’s often a bald lie. Move on to: It’s exactly the wrong argument for liberals: they insisted they were different; that’s why voters should hire them to clean up after Bush the Constitution Shredder. Ponder too: It’s an unprincipled, nihilistic argument that leaves America little hope to challenge or change the abuses of any administration. It’s an argument that one day may bite those who make it today.

The Left’s early, tentative forays into trashing George Bush--before failures in Iraq and Hurricane Katrina made Bush blood sport a national pastime—speculated that he might shift his terror fighting powers from targeting enemies of the state to persecuting ordinary citizens. An early frenzy featured the invented “Library Records Subpoena.” Actually, though, Sec. 215 of the Patriot Act--passed by overwhelming bipartisan majorities in Congress--addressed “Business Records” and said nothing about libraries. The statute authorized federal agents, on a showing of threat to national security, to subpoena business records that might contain relevant evidence.

As the Left recovered its footing and pushed back against the ascendant Bush amid post-9/11 national unity, “business records” provided an opening. First, MoveOn types created a fictitious narrative, then alternative media, then a salivating national press pounced and adopted the maliciously dishonest “library” attack: “George Bush wants to spy on what you check out from the library!!”

He never did, of course, instead aiming his efforts to prevent another mass atrocity. There’s never been a single case of alleged library surveillance. It was all invention and lies, from the first Daily Kos post to the breathless, relentless reporting of unprincipled national networks.

Bush may have overreached or not in what he asked Congress to pass, but big bipartisan majorities agreed with him. Bush never targeted domestic dissenters in the way that Soros Lefties and the national media feverishly panted about.

Enter Barack Obama and his mini-me Eric Holder. Conservatives, to the scorn of Soros Lefties and sneering media, distrusted Obama from day one. In year five, it comes out they had good sense and good cause.

The Constitutional Law Teacher President must have specialized in studying the loopholes. We learn he unleashed his Justice Department’s snoops and goons on the Associated Press in general, and on irritating network and print reporters in particular. Those “business records” that lefties fumed Bush would seek from your library? As it happens, Obama subpoenaed them from national reporters.

Liberals imagined George Bush might turn the awesome powers of the federal government against his domestic opponents, and took raging to the streets. The national media made them a staple of the evening news and pounded on the national psyche until Republicans were a marginalized hiss and a byword.

A few years later, it turns out Barack Obama did turn every power at his disposal, legal or illegal, against his critics. Different story this time, when the wolf really was in the field; the media hushed it up for four years. Now that it’s coming out, liberals still bow to his transformative vision.

A big problem with “But, Bush did it, too” is its grotesque subversion of America’s national political debate. Liberals said they were different. They claim Bush did it—all Republicans do it--and that’s why Americans should trust liberal, rights-protecting, Constitution respecting, progressives to right the ship and correct government abuse and overreach.

That’s right. In the liberal world view and messaging--zealously broadcast by America’s media--conservatives abuse civil rights and due process while liberals protect those constitutional values. So, when liberals are caught with their hands in abusive cookie jars, their protest: “But the other guy did it, too!” should ring risibly false from the get go.

So what if, as they say, Bush did it? Liberals said they were the right-thinking purifiers! The Bush guilt they speak of is no defense for their abuses. “Bush did it” is about like vegans taking over a BBQ joint and then blaming the former proprietor for why bacon is still a hot seller on the menu.

Finally, partisan arguments and false equivalence aside, America should be finding ways to improve, to correct errors, and to better serve its citizens. Yet, the team that preaches the virtues of big government is covering the sins of big government by fuming that the other guys sin, too. That’s a formula for permanent decline. Progressives should want to cleanse and lift government. They should want to fix its problems. They should want to offer something people can believe in, something people believe will treat them fairly.

Instead, liberals offer permanent excuses for abuses: Everyone does it.

If the best Obama’s defenders can muster is false equivalence with George Bush, that speaks depressing volumes. When “But the thugs before us did it, too” is the standard rebuttal to public outrage, there will come a day when liberals fervently wish a Republican administration were held to a just standard, instead of the one they now degrade, as they establish and defend new lows in what Americans can expect from their government.