Lessons to be Learned 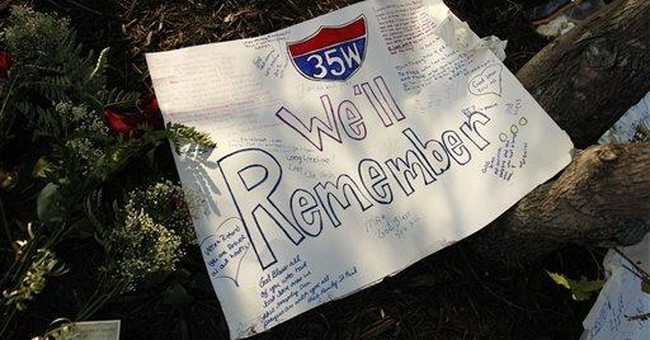 For the survivors of the tragic bridge collapse in Minnesota and for the families and friends of those who perished when that bridge plunged 60 feet down into the Mississippi River, that day will not soon be forgotten. But, there are lessons to be learned and remembered for us all, particularly for Congress, if we are to avoid future tragedies like this one.

For one, we must ask to what extent did the epidemic spread of pork barrel spending over the years squeeze out the federal funding that has been needed for truly necessary national infrastructure projects.

Not only are we not addressing this question, learning from past mistakes, but the emerging trend appears to be to piggyback on this tragedy as justification for increasing federal spending and even increasing federal gas taxes. Far too many Members of Congress have seized on this human tragedy to call for more money out of taxpayer pockets instead of exercising their own restraint in packing federal funding bills with personal pork barrel.

In the wake of the bridge collapse, the U.S. Department of Transportation made $5 million in federal funding immediately available to the State of Minnesota. The State has as much as $2 million available in its reserve highway fund, as well. In addition, Congress passed legislation to waive caps on emergency relief funds that could be appropriated to rebuild the bridge, allowing for as much as $5 million in federal funds to be spent on this bridge alone.

I supported that bill. Had I been given the opportunity by the Democrat leadership that pushed it through without opportunity for amendment or much debate, I would have preferred changes to that bill. For instance, I would have preferred that Congress not waive the state and local funding share. But prompt action to at least provide flexibility in meeting this tragedy was the responsible response from Congress.

That said, on the very day that Congress passed this emergency measure to rebuild the Minneapolis bridge, it also passed a bill making “technical corrections” to the massive $287 billion transportation authorization bill passed in 2005. The Chairman of the Transportation Committee, who also authored the emergency bridge legislation, announced in a press release that this “technical corrections” bill made more than $11 million in funding available for projects in his Minnesota district. This included nearly $2.3 million for upgrades to Elizabeth Avenue in Coleraine, Minnesota, a town of about 1,100 people between Duluth and Fargo.

Responsible governance would dictate that Congress give the State of Minnesota the ability to shift funds out of Congressional pet projects of lower priority and into those projects of extraordinary need and great consequence to hundreds of thousands of people. Responsible governance would dictate that we prioritize our use of taxpayer dollars rather than treat your bank accounts as one big, limitless Congressional ATM.

Millions upon millions of dollars are authorized and appropriated each year that catapult photo opportunities for Congressmen and Senators ahead of the priority lists that states set each year based on the needs of their state residents. We hear now that more than 73,000 bridges in the U.S. are rated as “structurally deficient” by the U.S. Department of Transportation. And, the Chairman of the House Transportation Committee recommends as a remedy a new gas tax for a new highway trust fund for bridge repair. But, Congress has been raiding existing trust funds for years for pet projects. And, Americans are paying too much at the pump already.

The real remedy lies in the answer to this question: How many millions of dollars were spent on bike paths and parking garages that could have been spent on bridge inspection and restoration? It may not make for a good photo op, but safety and routine infrastructure protection must return to the top of our funding priorities list.

When I first came to Congress, I drafted a bill know as the STATE (Surface Transportation and Taxation Equity) Act. My bill builds a whole new paradigm for funding important infrastructure projects by restoring states’ authority to set priorities for spending transportation. Authority would be wrested from Washington politicians who don’t drive our roads, don’t know our bridges, and are far removed from our state-specific needs.

Under the STATE Act, funding raised by New Jersey gas taxes would stay in New Jersey to improve driving conditions for New Jerseyans. The top-down approach that we’ve been using – New Jersey taxpayers sending their money to Washington where a portion was eaten up in bureaucracy and an even larger portion was transferred to other states before returning 92% back to the Garden State – hasn’t worked. And, it’s time for a fresh approach.

The Minnesota tragedy demonstrates that there are consequences that go beyond just wasting taxpayer money – misappropriation can cost lives. Congress needs to set priorities in its spending. Money should go first to necessities, like structurally unsafe infrastructure. And, states that know the needs of their residents should be given greater authority in determining how these priorities are set.

Dr. Birx to CNN reporter: Keep the politics out of it, buddy
Hotair
Nightline Anchor to Pence: ‘When You Talk To God,’ Do You Worry About Those Who’ve Died Because of Slow Federal Response
Redstate