Do We Have a Right to Know If Candidates Are Gay? 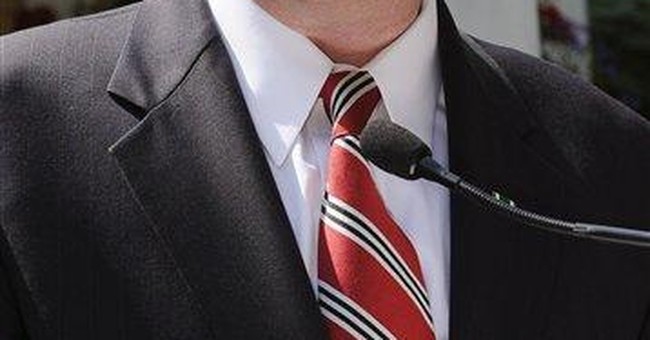 Congressman Mark Kirk, one of the Republican candidates for Senate to fill Barack Obama’s seat, has been “outed” by one of his primary opponents. Chicago newspapers are rushing to condemn the accuser/candidate. So are Republican leaders in the state. They are appalled by the accusation and Congressman Kirk’s campaign is declaring it “demeaning to the political process.”

I don’t remember any such outrage at the accusation of Governor Mark Sanford for alleged adultery. I seem to remember newsmen and cameras running to South America simply to confirm or deny. I don’t remember outrage over Senator Larry Craig and his “outing” for bathroom flirtation, just more “investigating” to find the truth. The candidate who “outed” Kirk is the least credible of those in the primary. His record of outrageous claims makes it impossible to take him seriously much less believe what he says. But in this case, press and Republicans alike are rushing to pooh-pooh what, in spite of the weakness of the messenger, has been the topic of discussion in Washington and elsewhere for quite some time. So, where is the reporting? Where are the cameras? The gleaning of records? The follow up on accusations?

Republicans did the same thing in the Mark Foley/Congressional page scandal. Republican leaders knew about Foley but for some inexplicable reason, covered for him. Do they want to repeat the same here? Surely, if Kirk is the candidate in the general election, the Democrats will not be so benevolent. It was reported in the press that Kirk had a lengthy meeting with Nancy Pelosi before voting for Cap and Trade. His subsequent excuses for voting for this economically disastrous measure were vague and contradictory. Was he blackmailed into support? And if he was, then how could we be sure he wouldn’t be in the future?

There are rumors of threats from Rahm Emmanuel of “outing” Kirk. It has been reported that a sexual harassment lawsuit was filed against Kirk by another male staffer when he worked for Congressman John Porter. Is this true? And if so, could this be used against him to garner another bad vote? It is reported that Kirk has been living with another Congressman, also strongly rumored to be gay. Is that true? Is anyone investigating this? Are we just waiting for the Democratic opponent, Alexi Giannoulias to pull out the long knives and rush to victory in November … or for Mark Kirk to take the seat and vote like any other Leftist in the chamber?

American voters have a right to know if candidates are gay. Why?

1) Because Kevin Jennings, Obama’s Safe School Czar, who has lived out his endorsement of sex between adult men and boys, has received tacit approval by elected officials. The openly homosexual Jennings has made his life’s work “Queering Elementary Education.” The president appointed him while Congress looked the other way. Safe, indeed.

2) Because the Hate Crimes law, which brings a fuller weight of law enforcement upon anyone perpetrating a crime against a homosexual and brings more punishment upon those who would harm a gay man as opposed to a grandmother or a young child, was established by elected officials. And because, if it follows the path of Hate Crimes in other countries, it will be the precursor to “Hate Speech” legislation—punishing any verbal objection to homosexuality in media, on billboards, and even in churches. And that too will be decided by elected officials.

3) Because homosexual marriage and civil unions and domestic partnerships are the stuff of frequent legislative decisions and are being foisted upon the American public, regardless of objections, by their own elected officials.

4) Because we are at war and the repeal of “Don’t Ask, Don’t Tell” is a promise President Barack Obama has made to the gay community in spite of the fact that military experts from the top down have argued continually that open homosexuality will harm unit cohesion and have a detrimental effect on morale. And who will repeal “Don’t Ask, Don’t Tell?” Our elected officials.

It’s not good enough for Congressman Mark Kirk to claim his “outing” “demeans the political process.” He should answer the following questions and Republicans and press must follow through to confirm or deny his answers:

2) Have you been living with another homosexual Congressman?

3) Were you sued by another male staffer in John Porter’s office for sexual harassment?

If the answers are “yes” then Illinois voters who embrace homosexual rights can give him the opportunity to represent those rights in the U.S. Senate. If the answer is “no” and subsequent investigation confirms it, the worry that he can be blackmailed or threatened will be removed.

This much we know about Kirk: He voted both for Hate Crimes and ENDA. Human Rights Campaign, the largest homosexual lobbying organization in the country has given him 85 percent, 75 percent and 88 percent approval rating on his votes in three consecutive congresses. Mike Rogers, the infamous homosexual “outer” of gay Republicans has stated clearly that he has not gone after Kirk because Kirk has supported the homosexual community’s issues.

He has not supported the repeal of “don’t ask, don’t tell.” But if he is gay, he would have a vested interest in this particular issue. As a military reservist, he would have to resign his commission if he should openly declare. Kirk’s military service has been strongly appealing to conservatives even though his military voting record is inconsistent. He voted against the surge in Iraq and against enhanced interrogation methods for terrorists, limiting the methods to the Army Field Manual. And if he is “blackmail-able” how can we be assured he won’t change his position on this or any other measure?

Homosexuality has now been mainstreamed and de-stigmatized. Any reason not to be open and honest has now been removed. If a candidate is gay the American voter has the right to know for all of the above reasons.

Congressman Mark Kirk, please answer these questions. Republican leadership, if you are covering up things the public should know, stop or you will lose even more credibility with your base. And press? Do your job. Your duty is not to defend a lifestyle; it is to report the truth.