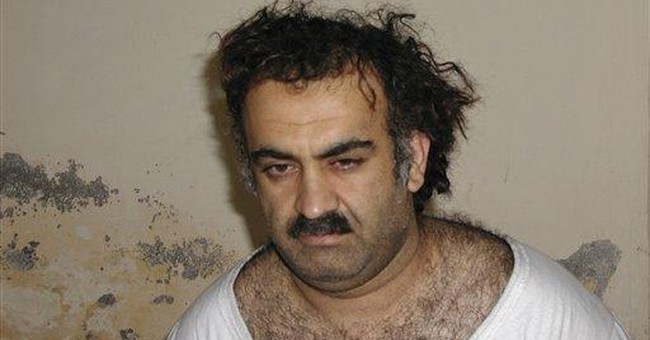 “It’s a dream come true!” declared Senator Dick Durbin referring to the economic benefits of bringing terrorists from Gitmo to tiny Thomson, Illinois. “…that’s an opportunity we are not going to miss.”

And that’s when it became the Theater of the Absurd.

I always thought it was the villain who was willing to do anything for money, but protagonist Durbin bragged about the financial windfall, downplaying the danger as though we were dumb enough to believe him. “Some of the things that have been raised … this threat to Chicago 150 miles away are pretty far fetched.”

Yes, I’m sure would-be jihadists would fly into Iowa City or Davenport long before they would consider Chicago O’Hare.

The Sun-Times: “…frankly, we simply have more faith in the American courts.”

Those courts that award ridiculous amounts to sheisters, refuse to give the death penalty to heinous murderers like those in the Chicago Brown’s Chicken massacre case, or the one that let O.J. Simpson go free?

Durbin: “The facts are there’s never been one single escape from a super max facility.”

We’re not worried about their escape, we are rightly concerned about the state and the community becoming the object of a terror attack. If the remaining prisoners at Gitmo find their way to Thomson Correctional facility, how could we not become the focal point of jihadi revenge?

The mob are ruthless criminals, no doubt, but even they have their limits. Although they might want to spring their capo, I don’t think even in the “Sopranos” they’ve ever strapped on explosives and killed themselves to accomplish it. No, the mob prefers their virgins in this life rather than the next.

But think about those jobs, Senator Durbin tells us. And all that money….

The Guantanamo detainees will be isolated from other prisoners and “supervised by the Department of Defense,” continued the Sun-Times. You mean the DOD that protected our soldiers so effectively from Dr. Nadal Hasan at Ft. Hood?

Scare talk might do wonders with “the GOP base, but it won’t convince a single terrorist that this nation has a backbone,” flexed the pen of the brave Sun-Times editorialist.

So, let’s see … closing Gitmo because Islamic jihadists are offended by it and accommodating them by moving it to the states, putting our citizens at further risk is an act of great courage? Selling the safety of the citizenry for bucks is a spine-filled exercise? Hoo-ah!

And finally, once again, my favorite, Governor Pat Quinn: “We’re here today to let the people know we’re not going to let the fear mongers carry the day. We’re going to do things right, the Illinois way!”

The “Illinois way?” The way that has Illinois head over heels in debt, our politicians dripping with corruption, salivating with greed and graft, some committing suicide, others spending their retirement years in prison? The “way” that has inspired the Chicago Machine and produced Rod Blagojevich, Governor George Ryan, Tony Rezko, Todd Stroger, Roland Burris, Jesse Jackson, Jeremiah Wright and Rahm Emmanuel …that way?

The Chicago Sun Times: “No terrorist can defeat us. But we can defeat ourselves if, in our fear, we compromise on the principles that have made this nation great.”

I told you it was absurd …fellow citizens, welcome to the “Illinois way.”