Obama is Sure About Something 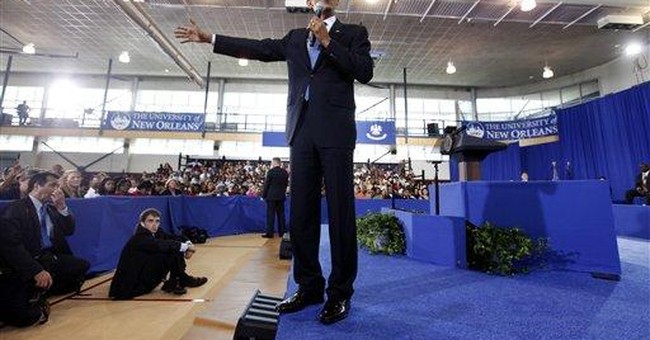 Do you remember the anticipation surrounding the great non-debate between Barack Obama and John McCain hosted by Pastor Rick Warren? Televised from Saddleback Church as millions watched, Warren pledged to ask the hard questions in order to get to the truth. It was a critical juncture in the presidential campaign and there was much public discussion over faith and values and marriage and Proposition 8 and where, exactly, each man stood.

“I believe that marriage is the union between a man and a woman ... for me as a Christian it is also a sacred union…you know, God is in the mix,” Obama declared to thunderous applause.

So there it was … proof. The skeptics of Obama’s Christian faith and his position on the moral implications of same-sex marriage had been put in their place. The man had said he believed marriage was between a man and a woman, it was sacred and that it was his Christian faith that informed him of this. It was convincing and powerful and many social conservatives breathed a sigh of relief and voted for the charming candidate with the lovely smile, believing they were affirming a new era in race relations and signing on to “hope and change.”

Fast forward to a recent appearance by the president in Washington, D.C. The occasion was the annual dinner for the Human Rights Campaign (HRC), the leading organization promoting lesbian, gay, bisexual and transgender rights. That audience was also eager to know just where he stood. Restless with his perceived inaction on their issues, they waited eagerly as Obama rose to speak.

He promised them the world. He promised a hate crimes bill that will put an added measure of federal law enforcement on anyone perpetrating a violent crime against a gay, lesbian or transgender person. If passed, murdering a gay man will be a much more serious crime than killing a grandmother. With bravado, he pledged to name this bill after Matthew Shepherd, the young gay slain in Wyoming in 1998. ABC tried to correct the narrative not long after the incident to clarify it was robbery not “homophobia” that resulted in the murder, but the story was already larger than life. Matthew was known for soliciting straight men and abusing drugs. His murder was tragic, but he was no hero. Still, Obama advanced the legend, and gave tribute to a man not known for his character, but for his sexual preference.

Next he promised ENDA (the Employment Non-Discrimination Act) to punish moral objections to hiring of GLBT persons—even in schools, churches, private business and government offices. The next time you visit your child’s school, after it passes, you could be met by a male teacher in a skirt or a drag queen as the office secretary.

I wonder if he had Rick Warren or the audience at Saddleback or the Christian world in mind. Surely that inference to a homosexual audience very clearly suggested that objections to homosexuality on moral grounds constituted those “outworn arguments” and “old attitudes.” What could be older than the Biblical prohibition against same-sex sex?

“I’m here with you in that fight…. My commitment to you is unwavering…. Do not doubt the direction we are headed and the destination we will reach,” the president promised to the applause of the crowd.

If he had only made promises that definitive to Rick Warren… But he did say this during that televised “debate” in the heat of the campaign: “I’m not somebody who promotes same-sex marriage.”

Really? He promised those at the HRC banquet he would overturn the Defense of Marriage Act. Ultimately he fought against Proposition 8 in California, a vote by its citizens to prevent same-sex marriage. And later he made sure he spoke in opposition to traditional marriage advocates in Iowa who were, with his help, defeated.

But the promises to the Human Rights Campaign didn’t end there. In spite of objections by the best military minds who have cautioned about the dangers to troop cohesion in the face of open sexuality of either gender, Obama declared defiantly, “I will end ‘Don’t ask, don’t tell.’ That’s my commitment to you!” Commitment to the homosexual activist community ... not so much to our troops in the field.

Indeed, I believe he is. For a man who is so uncertain on so many things, of the need to advance homosexual rights, he seems passionately convinced.