Does Barack Obama Play the Fiddle? 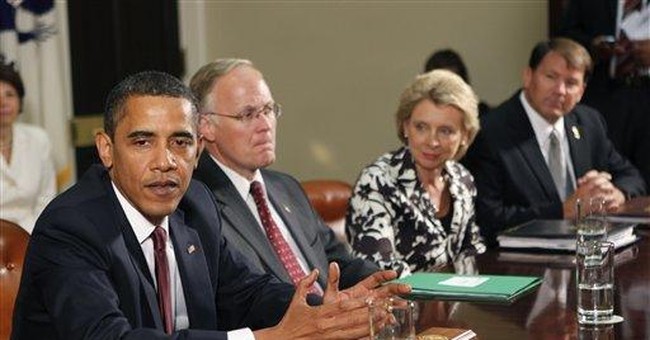 There is a pattern to President Barack Obama’s public policies. Generally they are the opposite of what makes sense, but delivered in an oh-so-smooth manner, we almost believe him—and 58 percent of the population still seems to. To many of us, it has been clear for some time that much of what he says defies logic and is the opposite of what is actually true. But for the latecomers, Tuesday’s statements on Iran presented yet more proof.

While he once was “concerned,” seven days of bloodshed and brutality in Iran have led him finally to being “appalled and outraged.” But still it is collective. The “United States and the international community” have been “appalled and outraged,” he said. We can’t even have our own personal outrage without including the Europeans and the Africans and the Arab nations he so loves to appeal to. No, we must seek consensus on all things—including outrage. Once we saw that they were outraged, then we were outraged, too, darn it.

“If the Iranian government seeks the respect of the international community, it must respect those rights,” President Obama said. Is he serious? The Iranian government—seeking the respect of the international community? By ignoring years of U.N. sanctions in order to develop nuclear weapons? By killing U.S. Marines and holding our citizens captive 444 days? By repeatedly calling the holocaust a sham … shouting “death to Israel” and declaring America the “Great Satan?” By sending IEDs to Iraq to blow up American and coalition troops? The only respect Iran seems to be seeking is that of Syria and its other evil axis buddy, North Korea. Honor among thieves, but not respect.

Yet he extends the olive branch—or at least hot dogs and baked beans. Up until yesterday, our response to the bloody regime was to offer ketchup and mustard and share a picnic with fireworks in celebration of the nation we love; the one Obama is ashamed of and the Iranian regime hates.

Earlier this week, Major Garrett of Fox News asked the president at the press conference: “Are diplomats still welcome at the embassies on the Fourth of July, sir?”

“That’s a choice the Iranians are going to have to make,” President Obama said, twice obfuscating in his answer to Major Garrett’s question.

“Is it appropriate to have a social dialogue if they come?” the reporter pressed.

“Well, (loud sniff) we have made a strategic decision to engage on a number of fronts with Iran and we tried many years of isolation and we’re pursuing a different path now (loud sniff).”

Yes, the path to appeasement, lined with apologies and hot dogs while they do what they please to their own people, threaten the sovereign nation of Israel, mock and deride us—and still get invited to the party? Clearly, media attention forced the administration and the State Department to change course from this horribly misguided effort to engage in 4th of July diplomacy while Iranians yearning for freedom die in the street. White House spokesman Robert Gibbs announced yesterday that “those invitations will no longer be extended.”

Nevertheless, the administration seems to have only reluctantly deviated from this path to appeasement, which also included the declaration by our president just a few weeks ago that Iran has a “right” to nuclear development. He’s sure they can be trusted with nuclear materials to develop only power generating facilities … just as President Bill Clinton assured us North Korea would do.

While Iran spins out of control, North Korea threatens to “wipe out” the U.S. and the Taliban teeter ever closer to Pakistani nukes, the State Department official sniffs a “different path” and our president continues to preside over ridiculous policies, deviating only reluctantly and following international opinion.