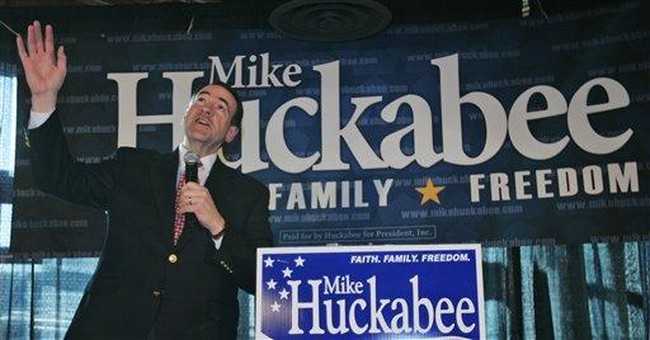 I’ve heard all the objections, but I’ve examined his record and character, and I still think Governor Mike Huckabee is the best Republican nominee left in the field.

Is it because he shares my evangelical sub-culture? Not really. There is such a wide swath incorporated in that label, I know full well it could never guarantee the necessary qualities needed in an American President. It might mean something and it may mean virtually nothing. But when the so-called “evangelical” candidate is a genuine Christ-follower—committed, serious, having “conformed his mind” to the teachings of Christ and in addition has administrative and leadership skills necessary for the job, you bet it makes a difference to me. It guarantees religious freedom to all, while tapping the real source of wisdom and compassion, coupled with uncompromising conviction. I believe Mike Huckabee to be just that kind of candidate.

While some of the criticism of Governor Huckabee has been legitimate, I find most of the objections overstated and not proportionate to the actual facts. More importantly, the problems with Huckabee are not nearly as objectionable as the actual records of John McCain and Mitt Romney. The following arguments have been made to discount Huckabee:

1. He’s the evangelical candidate and only appeals to those people

That certainly wasn’t true in December when, after months of appearing before audiences across the country in debates, he was winning over millions and moving ahead in the polls. That was before he was suddenly declared a “liberal” and accused of destroying the Republican Party in Arkansas. Suddenly, most of the people I admire in print and on television began to turn on him and regularly ascribe with disdain the “evangelical” moniker. Where once they enjoyed his wit, he was suddenly too … southern … too … evangelical…. and so, like dominoes, the pundits fell and the group-think began.

I am not in any way disregarding the legitimate arguments. I respect my pundit friends too much to ignore their concerns. I share some of them, but I don’t think I’m wrong to suggest that they have gone overboard with their vitriol in an all out assault on a good man with great political skills and stellar positions on some of the core issues we conservatives have always said we cared about.

2. He’s a tax and spend liberal

Taxes are actually a good thing if they are assessed fairly and spent wisely. Governor Huckabee inherited the 49th ranked school system in the nation. Taxes were raised to change that and now Arkansas schools are number 8. I would have gladly paid those taxes myself for that result. Roads and infrastructure were abysmal and taxes were raised after a referendum to improve life in Arkansas. He came into office with a $250 million deficit and left with and $850 million surplus. I don’t call that a liberal record. I agree with Mike Hucakbee that he governed well.

Evidently, the people of Arkansas did too. They elected him more than once with overwhelming margins and Time magazine featured him on the cover as one of the best governors in the United States.

3. He destroyed the Republican Party in Arkansas

It’s hard to get proper perspective on this. I have interviewed leaders, politicians and news people from Arkansas who don’t agree. But I do know this: Republicans faired poorly almost everywhere in 2006. Surely Governor Huckabee alone cannot bear the full brunt of the blame for a shift in Arkansas which was a national trend.

4. He supports “cap and trade” legislation in response to global warming

I don’t like this. I believe, like those I’m usually in concert with, that based on the research of reliable experts whose voices are repeatedly silenced, man-made global warming is a hoax with Al Gore, the Joker, leading the hysterical pack. But I have no problem when Governor Huckabee reminds us that mankind should be good stewards of the earth. I don’t hear a hard, firm commitment from him to “combat global warming.” What I hear is an attempt to keep an open mind and look for ways to work with others who are convinced. That’s not a bad quality for a leader.

This sounds really bad to a strong law-and-order person like me, unless you consider the full record and discover that 8,000 or so possible pardons came across his desk. I believe in enforcing the law but I also want an executive who demonstrates compassion. As to the dreadful subsequent murder by one parolee? When you are a leader, you make difficult decisions and must live with the consequences. Huckabee must live with that bad decision, but isn’t our whole judicial system based on giving people the benefit of the doubt … on the necessity upon conviction of having “no reasonable doubt?” Better to have some guilty men on the street than to punish the innocent. Don’t we believe that?

6. He was soft on immigration

I think tough immigration laws should actually be enforced. When Governor Huckabee and Mayor Giuliani reminded us the Federal Government was not enforcing immigration laws, which left governors and mayors to cope with the problems, I believed them. I am not offended that Governor Huckabee showed compassion to illegals, but I would be no supporter if he hadn’t adopted what Congressman Duncan Hunter and anti-illegal immigration groups have described as the best plan of any remaining candidate on the issue.

Why am I for Mike Huckabee?

1. Because he is a steadfast apologist for the things that are intrinsic to human values, the foundation of Western civilization: the sanctity of human life and the preservation of marriage between a man and a woman. These are not mere sound bites for Mike Huckabee, but bedrock convictions. The evils we face are not just from abroad, they are within. We need a president with a strong moral compass to navigate the difficult days ahead.

2. Because it takes that moral fortitude to face an evil enemy who has invaded our shores and taken us to dangerous parts of the world to defend our future. A morally confused person cannot make tough and unpopular military decisions without a clear understanding of the nature of his enemies.

3. Because I like the fact that this “tax and spend liberal” has run his campaign on a shoestring while remaining in the black. Makes me think he could be trusted to run the nation in a fiscally responsible manner.

4. Because he is gracious, witty, engaging and smart. Because I think he could debate Hillary Clinton or Barak Obama more powerfully and effectively than John McCain or Mitt Romney ever could. Sincerity cuts through phony rhetoric like a laser. Mike Huckabee could do that. Mitt Romney absolutely could not and John McCain is no match for the governor’s presence, substance and quick wit.

No one knows the Clinton legacy better than their fellow “Hope, Arkansan,” Mike Huckabee. Turn him loose! Express your concerns, but hold the assassination by group think.

I’m voting for Governor Mike Huckabee on Tuesday. He is a candidate we could get excited about—if only the pundits would let us!