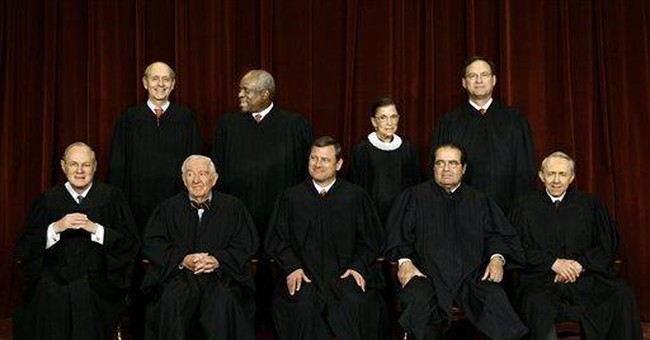 On the last day of its term, the Supreme Court began dismantling the Bipartisan Campaign Reform Act of 2002 (BCRA). Anyone who cares about the First Amendment should be cheering.

Wisconsin Right to Life (WRTL) wanted to air ads in 2004, to tell voters that Senator Russ Feingold was filibustering President Bush’s judicial nominees and call on voters to encourage the senator to change course. BCRA creates “blackout” periods during which organizations cannot run ads that might impact the election or defeat of a candidate for office. During these blackout periods (30 days before a primary or 60 days before a general election) only the media can talk about the candidates. Because Feingold was on the ballot in 2004 and these ads fell within the blackout period created by BCRA, the Federal Election Commission (FEC) barred the ads from going on the air, saying they were equivalent to the election ads prohibited during the blackouts.

In the case of FEC v. Wisconsin Right to Life, the Supreme Court correctly sided with WRTL and upheld the First Amendment right to speak out on issues even when a candidate’s name is mentioned.

In a 5-4 decision, the Supreme Court struck down the ban on issue ads, saying that BCRA is unconstitutional as applied to ads that inform voters on important issues. Chief Justice Roberts, writing the principal opinion and joined by Justice Alito, stated, “When it comes to defining what speech [is constitutionally protected], we give the benefit of the doubt to speech, not censorship. The First Amendment [demands] at least that.”

What is interesting about this case is that Justice Kennedy—so often a moderate voice on the Court—took a more conservative position than Chief Justice Roberts and Justice Alito. Justice Scalia, joined by Justices Thomas and Kennedy, wrote separately to say that they would go much further, that they would overturn part of an earlier case and strike down altogether the BCRA provision creating blackout periods. That way, these Justices reasoned, we do not need to worry about issue ads, because all ads would be protected speech.

What’s encouraging about this case is that it shows this new Court is not unwilling to revisit recent decisions when the opportunity presents. Chief Justice Roberts, who is very careful to avoid issues not before the Court, clearly stated that he was not ruling on election ads because such ads were not at issue in this case. Justice Alito, on the other hand, wrote separately to clarify that he would be willing to consider an election-ad case. Justices Scalia, Thomas, and Kennedy made it clear they would vote to strike down all bans on any ads.

The Supreme Court upheld BCRA in the 2003 case of McConnell v. FEC, but this recent decision starts to dismantle that precedent.

Our new Supreme Court is to be commended for bringing our country a step closer to what the Founding Fathers intended. The Framers understood that the most important reason for free speech is to hold our government accountable by getting information out to the voters. There is never a constitutional justification for preventing ordinary people from discussing the social and political issues of the day.

This ruling restores your right as a citizen to speak out on issues of concern. Whether the topic is guns (my favorite issue), judges, federal spending, abortion, immigration, or any other hot-button issue, you again have the right to join your fellow Americans, take to the air waves and demand that your elected leaders respond.

This goes to the heart of our American system. A democratic republic only exists when the people can speak loudly enough that those in power cannot help but hear. It doesn’t guarantee a particular result, but it does guarantee the satisfaction of a fair fight.

Of course, the way to really get a politician’s attention is to be able to take out an ad either for or against their reelection when their name is on the ballot. Such ads are called election ads, and today’s opinion does not go far enough to restore that part of free speech.

But several justices made it clear today that they will take up that issue when it’s properly brought before the Court. The upcoming presidential elections may provide the opportunity for exactly that.