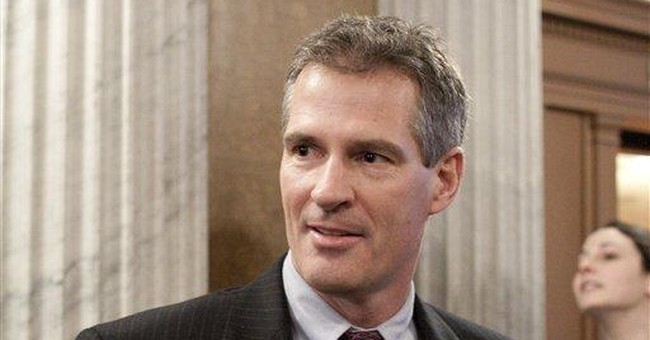 ATTLEBORO, Mass. – Just off I-95 heading north toward Cape Cod, a crisply dressed Fran Hanley meticulously wipes every nook and cranny of the gas pumps at the service station where he works.

Hanley, 61, clearly takes his job seriously. He pauses only briefly to explain that an exceptional work ethic is a large part of why he voted for Republican Scott Brown in January’s U.S. Senate race: “He had the right attitude when he was campaigning and, so far, he has kept his word of representing the needs of the people, not of Washington.”

Hanley considers himself an independent but consistently voted for Bay State Democrats John Kerry and the late Ted Kennedy; he even supported Kerry when he ran for president. Like many Democrat-leaning independents, he went Republican for Brown in the special election to replace Kennedy.

Hanley and Brown are perfect examples of the worst fears of the White House and Democrats in November.

The new normal in poll after poll heading into the midterm election is that Democrats face historic voter disconnect, likely hindering their ability to retain control of the House of Representatives and slimming their majority in the Senate as well.

Republicans must win 39 House seats and 10 in the Senate to hold majorities in both chambers.

Pollster Neil Newhouse of the GOP polling firm Public Opinion Strategies looked at his national data prior to Brown’s win and compared it with current data. “Surprisingly, there’s not much difference,” he says.

Newhouse says the data shows the country’s mood as overwhelmingly negative, then and now. The president’s job approval was inverted then, as it is today. Congress’ image was in the dumpster then, and still is today. The generic ballot was a dead heat then, as it is now.

“Remarkably, it seems as though the fundamentals of this election may have been set as far back as last December or January, and nothing has really knocked it off that track,” he said.

Up the Cape and across Nantucket Sound, Gov. Deval Patrick, a Democrat and close friend of President Obama, held a town-hall meeting at the Unitarian Meeting House. Inside, Patrick tried to keep the meeting about local issues; outside, the Nantucket police union picketed the meeting.

Holding his sleeping son in a knapsack, summer resident Hardy Watts of Boston said he wasn’t surprised to see Patrick make a rare Nantucket appearance. “The sharp memory of Brown’s win is probably sending him a chill,” said Watts, 36, a former high school American history teacher who just finished law school. He was impressed with Brown’s campaign – and is equally impressed with Brown’s first six months in office.

“He went in there to break gridlock and not be the rubber stamp for any party,” he said. “So far, so good.”

In an interview with the Trib, Brown said the biggest challenge today is getting Washington to create jobs, which he finds frustrating. “We need to focus on what Americans are concerned about, creating jobs. It’s that simple.”

Instead, he said, Washington works on bills that curtail jobs and spends money on “stimulus” projects in ways he could never dare dream.

Reports last week continued the narrative of a bleak economy with anemic hiring, staffing cuts and new applications for jobless benefits rising to the highest level in almost six months.

That’s not very helpful to a party in power promoting a “Summer of Recovery.”

While the White House privately admitted shock when Brown won, his victory came against a very weak, arrogant Democrat. Brown ran as a very strong Republican, managed behind the scenes by former Massachusetts governor and fellow Republican Mitt Romney (perhaps the smartest politician on the planet).

According to University of Arkansas political scientist Bob Maranto, Brown won in part because of “an overriding sense that President Obama had overreached.” He also thinks Gov. Patrick “would lose this year save for a third-party candidate who will probably siphon off enough Tea Party voters to keep him in.”

Nantucket Island’s well-preserved cobblestone streets are lined with rustic architecture, its beaches awash in islanders, day-trippers and seasonal residents. Although bustling with people, shops and galleries do not see the same robust business that food stands and restaurants enjoy.

Nantucket is not immune to the nation’s economic downturn. Like every town and city in the country, it imposed a municipal hiring freeze to help manage its budget.

Newhouse says his polling data indicates Americans are less optimistic about the economy now than they were in early January – making a Democrat comeback all the more difficult.

Brown’s January election was a two-minute warning for Democrats that November’s election will be particularly hazardous.