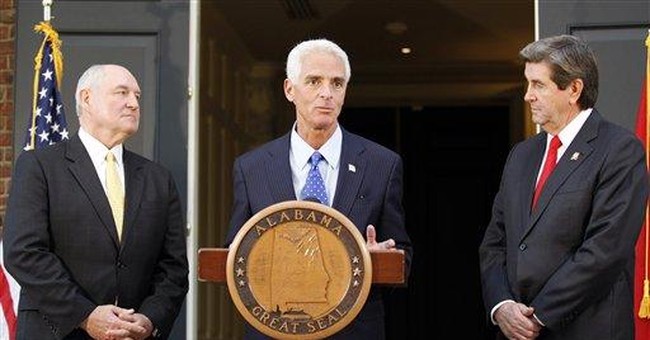 The best way to forecast the Republican primary for Florida’s U.S. Senate seat would be to quote Winston Churchill: "It is a riddle, wrapped in a mystery, inside an enigma."

A few months ago, Gov. Charlie Crist was in the catbird seat. Hugely popular, he was set to win the 2010 GOP primary in a landside over former Florida House Speaker Marco Rubio.

Last week, a new Rasmussen poll of likely Republican voters showed Crist and Rubio tied, each with 43 percent of the vote.

The political riddle is why Rubio cut Crist’s lead by more than half. Is it that Rubio is gaining, or that Crist is slipping?

“I think it is a combination of both,” Rubio said, in between his son’s school play and campaigning. “People are starting to realize they have a choice now, and the polls show they are considering outside of the establishment.”

Part of Rubio’s gain is natural: Crist is the better-known politician – but once a challenger gets enough financing to make themselves known, the challenger usually is able to cut into a big lead.

If the earth stands still and conditions stay current – and that is a big “if “ – Crist likely will win the nomination and probably the seat. But when was the last time the earth stood still?

Two things are going on nationally that make the Crist-Rubio race a bellwether for just about every primary across the country.

One pertains to schisms within parties – and a bigger schism exists now among Republicans than among Democrats. Although Democrats are actually less cohesive and more varied than Republicans, they are much less likely to want to commit fratricide.

The other thing is what ultimately decides primary elections: a fired-up base. Unfortunately for Crist, he has become the national poster-child for party discontent; his collapsing poll numbers put that in perspective.

If national conservatives decide this race is where they make their stand against moderates, a lot of momentum, focus and money will follow.

For Republicans this will be a battle between pragmatic instincts and political purity.

The 23rd Congressional District race in New York was an excellent example of this. Party leaders in the proverbial smoke-filled room picked the kind of candidate who might have won the seat; the base backed the guy likely to lose.

The disconnected and discontented have gravitated towards “Tea Parties” and anti-health-reform protests and cable-news shows such as Fox News’ Glenn Beck; they are re-engaged in politics and have a love-hate relationship with their natural party, the GOP.

While they want to be part of a conservative governing majority for less government, they don’t trust the GOP and are weary of the “establishment” (code for being socially tolerant and fiscally willing to spend taxpayer money).

They despise the eight years of earmarks and pay-to-play that was the Bush administration; they oppose the prescription-drug program that Republicans gave seniors. Yet because of Democrats’ 2006 midterm election gains and 2008 presidential sweep, necessity dictates they must be part of the GOP’s efforts to win in 2010.

But with that comes a price regarding political purity: No longer can candidates have it both ways – running as conservatives while being moderates.

The purity test will be on display in Florida, and the younger, purer Bush family members are set to have an influence.

As House speaker, Marc Rubio was then-Gov. Jeb Bush’s partner in conservative governance. And while Crist once was able to talk conservatively and govern from the middle, that now is a liability as he abandons the governor’s office for a shot at the U.S. Senate; inconsistency and impurity are causing him problems today.

This race probably will be won by the GOP, regardless of the primary’s outcome. Yet the party’s standard-bearer will speak volumes about the party’s direction.

If Rubio wins, a new brand of appealing conservatism – in the mold of Bob McDonnell in Virginia – will be seen as the party’s strategy for victory and the pathway to its 2012 nomination. (Think Tim Pawlenty.)

If Crist wins, the John McCain of 2008 will reign large – and Mitt Romney will have a leg up on the 2012 nomination.