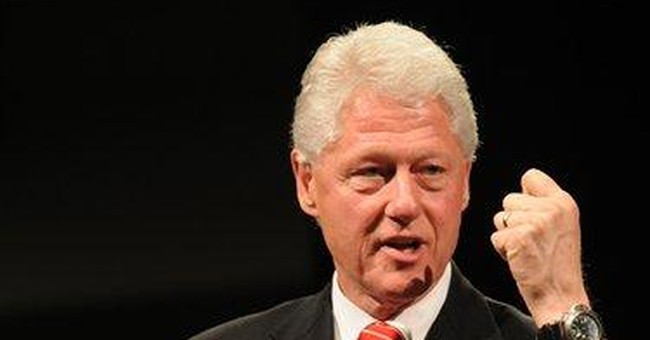 Former President Bill Clinton quipped to a couple thousand liberal bloggers in Pittsburgh last week that the great thing about being a former president is that you can say whatever you want. The terrible thing is, nobody cares what you have to say anymore.

“Unless, of course, your wife is the secretary of state, and then they really only care if you screw up,” he added after a generous pause.

A brilliant observation from a man trying to explain how he can make a difference in the world, now that his political party is in power with his wife, Secretary of State Hillary Clinton, as one of the powerbrokers.

In the fertile but ill-defined land of ex-presidents, Clinton stands on the precipice of being able to do the most harm or the most good.

For the most part, he is in a league of his own. Not counting the recently exited George W. Bush and the shamed Richard Nixon, no former two-termer has lived long enough to have an impact since Andrew Johnson became a U.S. senator in his post-presidency.

Clinton proved his vitality earlier this month when he became the catalyst in North Korea’s release of two imprisoned American journalists.

Via the emerging voice of Twitter and Facebook, his diplomatic rescue became the most-chatted-about event in cyberspace. Cable news networks gave live coverage to the journalists’ and Clinton’s homecoming.

The accolades from the administration were more muted.

Clearly, his wife was proud but a hint of her feeling overshadowed showed at a subsequent news conference, when she thought she was being asked what her husband thought about an issue.

And the White House’s welcome-back reception was crisp and business-like. The administration initially invited the former president to the Situation Room for a briefing, an interesting choice for a chat. Perhaps sensing curiosity brewing in the press, the meeting moved to the more appropriate Oval Office.

That speaks to the larger question: When and how can Clinton move forward to have an impact?

He is a man who is gratified with his role, but not satisfied. Yet the signals coming from the White House seem to say, “We are not quite sure what we want to do with him yet, and we are sort of trying to figure that out.”

For evidence, look no farther than a New York Times article last Monday that recounted how Obama chief of staff Rahm Emanuel stuffed Hillary’s hiring of former Clinton aide and Obama campaign provocateur Sidney Blumenthal. What was interesting about that piece is that the only person who probably would have told that story is Rahm – a clear signal from the White House to the Clintons that they need to play ball.

“There is a lot of fight left in him,” says former Clinton White House aide Simon Rosenberg, “and it is happening at a moment of tremendous opportunity for Democrats.”

Rosenberg, now head of the Washington-based think tank NDN, adds: “You can hear it in his voice that he is struggling to calibrate his role, to be satisfied with what he has and not go beyond what is appropriate for him.”

A GOP strategist who once worked against Clinton says that, because of his stature and presence, Clinton could help to complete the Reagan legacy for America where we "truly become the last best hope for mankind" by working on two fronts, as an ambassador for peace and for health.

With or without White House empowerment as a peace ambassador, Clinton could help to bring opposing sides together to solve such conflicts as those in the Middle East or the Koreas.

As an ambassador for health, his greatest legacy will be the work of his foundation in fighting disease around the world. If researchers are close to discovering a vaccine for HIV/AIDS, it will be Clinton who can take the lead in ridding Africa of the deadly disease; he also can seek to improve nutrition and children’s health around the world.

These are things a president or secretary of state can't do because of too many other pressing demands. But a former president can, with the power of the institution he left behind.

One other possibility, albeit remote, is for Clinton to become the next United Nations leader. (Remote, because other countries will never allow an American to hold the post.)

Time has a way of softening partisan views of former presidents, and Bill Clinton is no exception. But his biggest obstacle may be found in the halls of the Obama administration.