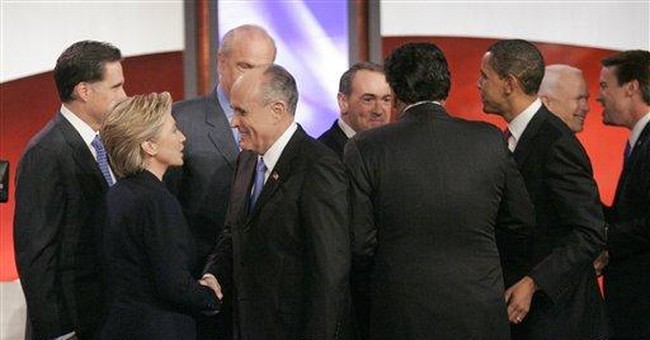 "We had over a thousand people at a rally we did yesterday," Mike Huckabee said Saturday during an exclusive interview with the Tribune-Review. "Same thing happened today in Londonderry. We had a big rally with Chuck Norris, standing room only, with people spilling out the doors.

"We literally just blew the place out and eventually people had to be turned away."

Huckabee walked away with a comfortable GOP win Thursday in Iowa, energizing his campaign in New Hampshire, which conducts 2008's first presidential primary Tuesday. Three days ago, Huckabee campaign signs and buttons were minimal. By Friday afternoon, they increased tenfold, as had street corner rallies conducted by supporters.

"We are definitely seeing momentum here, and it is not just an ‘Iowa’ thing," Huckabee said during a phone interview. "We have growing support here in New Hampshire as well."

There will a forum for Republicans today sponsored by Fox News. Huckabee said it is critical for him to show not just a command of the issues, but also a command of spirit and attitude so voters can see.

"Someone they can visualize being president," he said.

Granite staters want to talk taxes, economy and health care. In Iowa, the conversation centered on ethanol, a fuel made from corn, and for Republican voters, conservative values.

"Even though there is a lot of discussion about the voters being very different, my experience is that the voters all across the country are the same in that they want authentic and consistent leaders," Huckabee said.

"Not so much about every issue, but that you really believe in what you are saying and that you say it with conviction and clarity.

"In New Hampshire, they respond well to the idea of limited government with a strong focus on the 10th Amendment and leaving power to the states."

According to RealClearPolitics rolling polls in New Hampshire, Huckabee and John McCain are on the rise, while Mitt Romney and Rudy Giuliani are falling.

What does Huckabee think of the possibility of taking second place in New Hampshire?

"Oh gee, well, that would be phenomenal. If I did that, I would be the story coming out of here," he said.

"Look, at the rallies that we have had. People have not just come in and casually sort of kicked the tires, these people are coming with a checkbook.

"They are not shopping, they are ready to buy."