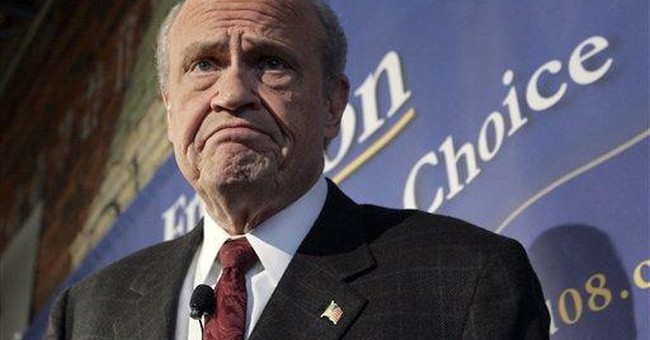 Trending
Manchester (NH): Fred Thompson spent most of caucus night in Iowa hovering between third and fourth place -- a far cry from the lofty first-place position he held in Rasmussen's poll of likely Republican caucus-goers last June. It has been a long time since Thompson has made a compelling reason to be in this race. And it should be a very short time before he confesses a compelling reason to exit stage right. A bystander in his own race, Thompson's political what-could-have-been slipped through his fingers long before he announced his candidacy. “The process for running for president has begun so early,” says GOP political strategist Charlie Gerow, “that if you are not in the game, you are not in the game … and Fred Thompson was never in the game.” Larry Sabato, who directs the University of Virginia’s Center for Politics, says “the biggest loser of 2008 is already known: Fred Thompson. The biggest pre-candidacy buildup since Ted Kennedy in the 1980 cycle has led to the same result -- a failure to come close to fulfilling his high expectations.” The short story of Fred Thompson started just about a year ago at the conservative love-fest known as the Conservative Political Action Convention, or CPAC. There, hints of a Thompson hat-toss began. By late spring, he was all the rage. He hit his high note with a clever video smacking down docudrama king Michael Moore. Suddenly, the political and media worlds could not get enough of Fred. It was his shining moment -- except that Fred forgot to shine. Summer came and went. So did a whole lot of staff and a whole lot of opportunities.
CARTOONS | Steve Kelley
View Cartoon

His eventual announcement in September came with a hefty price tag -- the Republican Primary voters in New Hampshire. He chose to announce on Jay Leno’s show, bypassing the first New Hampshire debate the same evening.

“He was an attractive idea, an image, and the reality couldn’t match it,” Sabato says. “This may be the fate of anyone touted as the next Reagan. Reagan is no longer a man. He’s a myth. No living human being can fulfill those expectations.”

“My opinion of what happened to Fred Thompson is that he turned out to be ... Fred Thompson,” adds Matt Lebo, political science professor at New York’s Stony Brook University.

“I don't think it’s just his late entry -- that is just a symptom of the problem,” Lebo says. “The problem is that he has never shown a willingness to fight for conservative causes. Believing in those causes isn't enough. There should be some evidence that you are willing to do something about it.”

While comparisons have been made to the failed 2004 campaign of Wesley Clark, those may not be fair. Clark was a political novice; Thompson is not.

So why did Thompson go wrong?

“I think he was expecting to ride in, pick up the bouquet, and that would be that,” says Bert A. Rockman, head of the political science department at Purdue University. “It doesn’t work that way.

“People confuse appearance with reality. Thompson played hard-as-nails authority figures on TV and in the movies. But his campaign had no distinctiveness, no comparative advantage.”

Somehow, someone must have convinced Thompson that times had changed and he could run a different kind of campaign, one that suited his low-key approach to politics. A campaign sans rubber-chicken dinners, moldy bus tours and all the other degrading aspects of running for president.

Tack on the misconceptions that tens of millions of dollars were waiting for him, that he could easily round up organizational support -- and that pretty much sums up why the promise of Fred never happened.

As the country shifts its gaze toward New Hampshire, Thompson stands to fare even worse here than he did in Iowa. As of Friday morning, he was polling sixth among likely Republican voters.

So, the near-term question for Fred Thompson isn't if he drops out of the race but when.