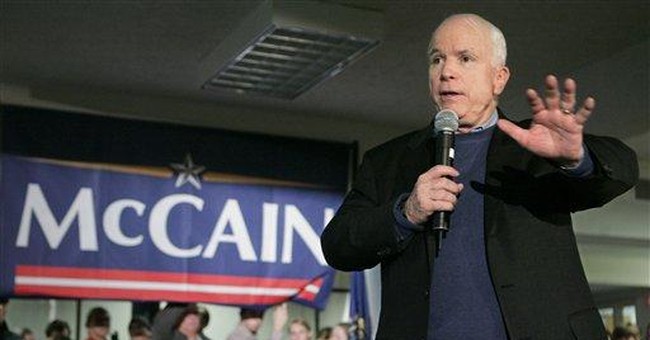 Hands down, John McCain is the buzz in New Hampshire. After a political freefall in the summer, the man who swept Granite State Republicans and independents in 2000 has gone and done a Lazarus, resurrecting his presidential candidacy.

He did it the old-fashioned way: He earned it.

“Townhall meeting by townhall meeting, bus ride by bus ride, and endless phone calls to local talk show hosts, are what have put McCain back on the map in New Hampshire,” says David Carney, a GOP political strategist not affiliated with any campaign.

One of those local radio talk show hosts, former Democrat candidate for governor Arnie Arnesen, agrees. "(D)espite many voters’ disappointment with his dismal campaign ... the charisma, smarts and straight talk of McCain did not evaporate with voters over the last eight years.”

More important, Arnesen says, no negative news has come out about McCain: “No illegals cutting his lawn, no clemency cases in Arkansas, no trophy wife, no Bernie Kerik or curious housemates who happen to be gay ... we know who he is, and with the war in Iraq taking second place to the new gorilla in the room, the economy, suddenly McCain becomes attractive again.”

“Death spiral” and “death-watch” were all the talk of McCain in July. Fresh off an ugly and losing illegal-immigration battle, McCain’s campaign imploded. Longtime adviser John Weaver exited, causing a domino effect that left McCain’s campaign bare-boned and broke.

Most political soothsayers predicted he would never make the next filing deadline. Yet Weaver, who gave his first post-McCain interview in September, bucked conventional wisdom by predicting McCain would re-emerge in late December.

And he has, according to New Hampshire's polling average as of Friday. He's climbed to within 5.6 percentage points and is in second place behind Mitt Romney, who's been taking it on the chin in the Granite State's leading editorial pages.

Weaver’s prediction was considered foolish. Today, he is a political Nostradamus.

“John has done a phenomenal job on his own,” says Weaver. “You have to give him credit for it. He has run his campaign in New Hampshire on his back.

“John’s re-emergence also has a lot to do with the times that we live in. Remember, we are a nation at war against an enemy that does not wear a uniform. You have to ask yourself, who has been prepared to lead us in this global struggle that we are in?”

Graham, who chairs McCain’s campaign in the critical first-in-Dixie South Carolina primary, says people tend to forget how volatile the world is -- until an event such as the assassination of former Pakistani leader Benazir Bhutto reminds them. “Calm can be replaced by a monumental event in seconds. John McCain is the one candidate that will rise to the occasion.”

McCain, now running fourth in South Carolina, lost to Bush there in 2000, in part, because he was not prepared. “That is not the case this time,” Graham says. “We have the majority of the political network and a phenomenal veterans coalition. This time, we are ready.”

“But,” he cautioned, “you cannot look at John winning South Carolina if he does not win in New Hampshire and Michigan. Momentum probably matters in South Carolina more than anything.”

“McCain’s re-emergence proves just how unsettled the Republican race is,” says professor Bert A. Rockman, the head of the political science department at Purdue University. “His rise is mainly a function of skepticism toward the others and his relative popularity among independents.”

“Over the long run-up to the first primaries, the faults of the other candidates have become more visible. Everyone now realizes there is no perfect candidate. Given more information about all the candidates, McCain compares more favorably.”

As for Sen. Graham, he says he never considered dropping his support of McCain or encouraging McCain to drop out. “Are you kidding? There is no fun in running if you don’t go down in flames at least two or three times. Our mishap happened early, and that is a good thing. It is better to be strong in December than it is in July.”