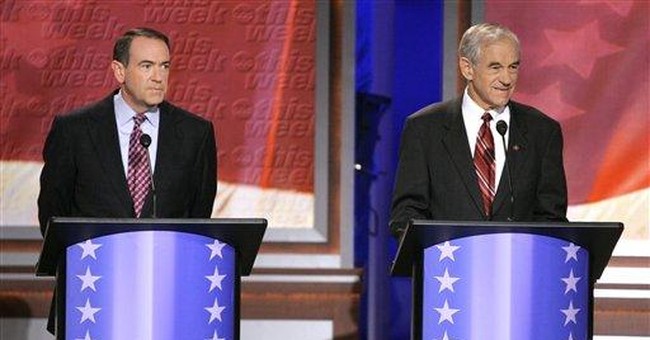 Whose yardstick do you use to measure the impact of Republican presidential candidate Mike Huckabee’s second-place showing in the Iowa Straw Poll?

“If he had money, he would be our worst nightmare,” says Democrat strategist John Lapp.

Lapp, who helped bring down Republicans in 2006 as executive director of the Democratic Congressional Campaign Committee, said “the real threat of Mike Huckabee is that he is a happy warrior, a down-home guy comfortable in his own skin. Right-wing conservatism with a smile.”

Fresh off his low-funded, second-place showing last weekend, Huckabee said in an interview with the Trib that he feels more like a man who placed first.

“It felt like a win to me, and it speaks to what Republicans look for in leadership – they want a candidate that is going to be frugal with their tax dollars,” the former Arkansas governor said. “If you are completely opulent with your own money, chances are you really are going to be wild with somebody else's money.”

Strategists on both political sides agree Huckabee has great appeal to Middle Americans who work hard to support their families, who want lower taxes and responsible leadership, and who go to church every Sunday but don’t feel the need to tell you all about it.

“A Huckabee supporter is not a hedge-fund manager,” Huckabee himself explained. “He is probably some guy who trims his own hedges on weekends. More Main Street than Wall Street.”

Since his strong showing in Iowa every analyst who has ever stuffed an envelope suggests that he makes the perfect vice-presidential candidate.

“Six months ago, no one thought that I belonged on the stage,” Huckabee said. “Now they are saying, ‘Gee, he ought to be at least vice president’ … give me a few more months, and they will be asking me, ‘Which one of these guys would you like to pick as your running mate?’ ”

Yet Huckabee said he will never come out and say "no" to a vice-presidential offer because “that just that makes you look like an idiot when you later end up taking it, if you do.

“I am not being facetious or coy, I just really don’t sit around thinking about, ‘Hey, if I really work real hard, I might get to be No. 2.’ ”

In politics there are always paradigm shifts, changes from one way of thinking to another. Huckabee’s emergence in Iowa pushed Tommy Thompson completely out of the GOP race. But it also came at a cost to another Thompson.

"He definitely cuts into Fred Thompson" said Republican strategist Charlie Gerow. “Huckabee easily picks up the disaffected Republicans that were the ‘none of the above’ in the AP poll last month, taking big chunks of them into his column.”

Huckabee also has impressed some Republicans as the “straight-talker” of the 2008 campaign. He is armed not with anger, but with wit. His quips are reminiscent of Will Rogers.

Like Rogers, most of what Huckabee says comes straight from the hip. He calls it “one of the benefits of not having a lot of money – I can’t afford a room full of consultants and scriptwriters who tell me what to say and what not to say.

“Some of the candidates are so scripted and so handled that there is nothing spontaneous about them.”

Lapp says Huckabee definitely passes the classic "which candidate would you rather have a beer with" test. It's just that Huckabee doesn’t drink beer.

He doesn’t wait for an answer. Time for him to go. He needs to get on the phone to make fundraising calls – “lots of them.”