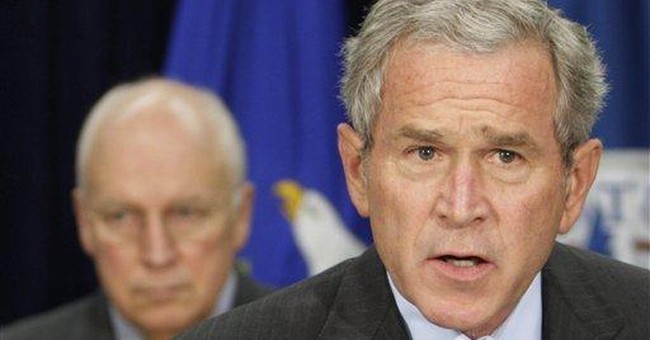 An Associated Press poll shows a majority of Republicans would not or could not say who they will vote for in the coming presidential election. Nearly one-quarter of those polled could not firmly back the current contenders, including prospective candidate Fred Thompson.

But is that their fault? Not entirely.

Much of that lack of enthusiasm can be traced to the summer of 2000 and Dick Cheney's vice-presidential search committee. Cheney was tapped by GOP nominee George Bush to find a suitable running mate, a person who could become Bush's and the party's heir apparent. Then-Pennsylvania Gov. Tom Ridge and Oklahoma Gov. Frank Keating were among the top contenders. Keating made the final cut; the decider-in-chief chose Cheney.

How different would the country be had Keating not been discarded?

Markedly, Keating told me in a telephone interview last week.

Because the Bush administration picked a vice president who ended up having no presidential aspirations, we are left with decisions that have "taken (the) spirit out of the heart of the country; we do not have that feeling of being the 'shining city on the hill,'" Keating says.

Adding that there's more "growling" than "glowing" these days, Keating says "we have kicked the can down the road because there is no political investment in this administration in the next election and that is not the Republican way."

Had Keating been vice president, the GOP would not have had a vice president who has presided with the closed, deliberating style that Cheney has. And Bush would have looked toward 2008 as a legacy election, perhaps making decisions that were much more politically expedient, such as cutting loose an embattled attorney general. The administration would have focused on the traditional “third term” -- the one your sitting vice president holds on to for you.

“Usually, the Republican nominating process is very orderly with an expected nominee, one that is generally nominated with very little acrimony and very little fanfare,” he said. “It is the way Republicans like to be.”

But he does not believe that is the reason malaise has beset the Republican base. “I think that what makes them enthusiastic is the same thing that makes Democrats enthusiastic, and that is raw, red meat.”

Issues like abortion, gay marriage, the Ten Commandments in every courthouse and border security -- the kind of stuff that Republicans like to sink their teeth into.

McMahon says that, right now, all the Republicans have are a bunch of people who might be able to win a general election “and that is not very exciting for them.”

While red meat is important, The Cheney Effect cannot be properly assessed without considering its lack of a legacy.

“As vice president, Cheney had been just a place-holder and that is a very distinct dynamic,” said GOP political strategist Charlie Gerow.

This country has ringside seats to the first presidential election since 1952 with no incumbent or sitting vice president running for office. Sans a political stake in the next election, no one in the Bush administration is out amongst the base listening to their concerns -- giving them little understanding of the level of animosity that is resonating among the rank and file. Reading poll numbers in the bunkered-down offices of the White House does not mean as much as seeing the faces of people who are affected by their decisions.

Gerow says there are many GOP insiders who still think Keating would have been an outstanding first-tier candidate in 2008. "The problem is that eight years after years of anonymity, it is only GOP insiders that know Frank Keating."

But that might be a blessing in disguise for Keating, according to McMahon's analysis.

"Anyone coming out of this administration would be facing a 29 percent approval rating and have the electability of Alberto Gonzales.”