There’s something about Hillary 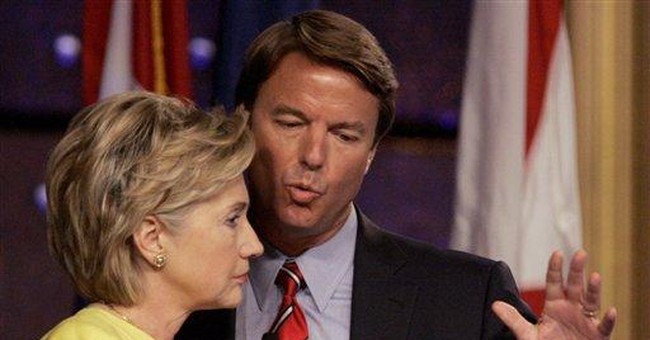 She is probably the most vetted candidate for president, ever.

Hillary Rodham Clinton has been running for the presidency, or near the presidency, for ages. Her campaign is pretty flawless; like one of those Olympic gymnasts who gets a 9.8 or 9.9 every time, she lands on her feet, hands outstretched, every time.

Yes, Barack Obama leads her in fundraising and in netroots mojo. Yet the historical argument is that establishment backing will win her the nomination.

So does she clearly have the upper hand, with the establishment behind her? Was her strategist, Mark Penn, right when he said Hillary is inevitable?

It can be argued that Hillary wins the Democratic nomination for three fundamental reasons:

· She is the former first lady with a former commander-in-chief campaigning for her.

· She has a message that appeals to Democrats that goes beyond the Iraq war.

· And she has built an organization and a fundraising machine that is hard to beat.

Another problem is a compressed primary schedule. Iowa still is rocket fuel. If she gets close but loses the caucuses there, then Iowa’s winner is sling-shot through the rest of the primary schedule – where winning becomes much more about free press coverage than about money.

Likeability also is a problem: While she is doing the best she can to be a likeable candidate, she still comes across as strident. Right now, she still loses the classic test of who would you rather go out and have a beer with?

But the netroots movement has not proven its ability to carry its candidate from beginning to end. At least not yet.

Go to just about any Democrat blog, and Hillary clearly is not “their” candidate. Netroots activists like new, they like fresh, they like different, and they do not like anyone who voted for the Iraq war. In many ways, they are the newest incarnation (thanks to technology) of the Howard Dean-Paul Tsongas-Bill Bradley-Gary Hart voter.

Right now, it is still a two-and-a-half-man race, with Edwards as the half.

Edwards stands at the precipice of either disrupting the top tier of Obama and Hillary or becoming the Democrats’ John McCain. It will come down to whether his triple-H problem (haircut, house, hedgefunds) blocks his chances of becoming a spoiler.

And Obama? Well, some things money can buy; for everything else, there’s Barack Obama.

If Hillary is able to keep the debate and the campaigning on her terms, she effectively will make the 2008 race about changing direction from Bush – of returning to the good part of the Clinton years, when the economy was perceived as growing and the world was perceived to be at peace.

No matter where you find yourself politically, something about Hillary provokes an instant recognition and reaction.

Yes, she is the most vetted candidate for president in modern American politics; she has gone through more of a metamorphosis than rock-star Madonna.

The challenge for Hillary is to define what that "something" is about her that still escapes the America public. Who is she? The challenge for voters is to explore her narrative and decide if that mysterious "something" prevents her or makes her the best candidate for president.

But she first has to pass that beer test.