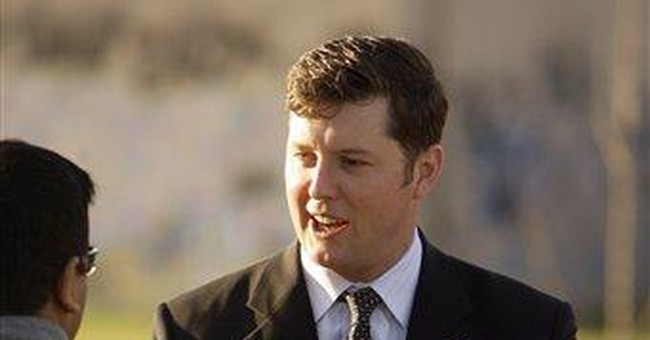 Time punishes war. The war in Iraq is no exception; as each moment passes, public resolve, politics and passion erode its mission.

Collectively, many Americans tend to remember the mistakes and politics that led us there, rather than the faces of the men and women who serve and defend us.

Seven months ago, Lizzie Palmer, a young lady from Columbus, Ohio, barely over the threshold of childhood, felt compelled to do her part to remind people of those faces.

The result is a stunning video that was showcased on Chris Wallace’s Fox News Sunday last week.

In the video, entitled “Remember Me,” Palmer mixed thought-provoking yet simple text with haunting music and tender images of our troops smiling, hugging, loving, dying. From a husband’s photo of himself lying on the ground surrounded by a heart made of rocks, to a man crippled with anguish kneeling beside the open coffin of a fallen soldier, Palmer takes you on a journey that stops you in your tracks.

“I felt like there needed to be more support for our troops,” said Palmer, who is all of 15 years old. “This video was my contribution.”

Palmer first posted the video on YouTube at the end of November 2006. For a couple of months it was like any other video, only tracking a handful of viewers. Then, two months ago, it snowballed.

“I didn’t like that,” she said. “My video was made for the troops, and people were watching it and then degrading each other because of their different beliefs.”

“We had decided it was such a special, moving tribute to the troops,” Wallace said, “that you cannot watch it, no matter what you think of the war, and not be tremendously affected by her message.”

He gets e-mail all of the time for his stories, but the reaction to “Remember Me” was exceptional. “Uniformly, people’s reaction has been that they had never seen anything quite so special, quite so meaningful.”

Falling silent in the middle of reading one of those reactions, he confessed: “It chokes me up just reading these e-mails.”

“The attention span of the American pubic is so small,” said Murphy, who talked about the video in a speech later that day. “These men and women are heroes, and they need a thank you, they need to know that they are missed and loved.”

Behind the politicians and the headlines of the war are our troops, as so vividly illustrated by 15-year-old girl. A 15-year-old girl who longs to play lacrosse, craves Chinese food and lollipops, loves her Ohio State Buckeyes, and will be proud to join the U.S. Army upon graduation from Grove City Christian High School.

A few days after Fox News ran Lizzie Palmer’s salute to our troops, Senate Majority Leader Harry Reid, D-Nevada, proclaimed that the “surge” they are fighting had failed.

In the two months since Reid’s previous declaration that America has lost the war, more than 12 million people have viewed “Remember Me” on YouTube.

Regardless of where one stands on the war, Lizzie Palmer has reminded us to always remember and to never forget.

“I want to meet this young lady and thank her myself,” said Rep. Murphy. “I think what she did is important.”

Joe Biden Reportedly Having Trouble Keeping Up with Everyone Else at G-7 Summit
Townhall
'We're in incredible danger': The GOP's assault on education and history is based in Nazi ideology and obsessed with protecting white supremacy
Twitchy
EXCLUSIVE: Defector Provides Evidence That the Chinese Military Orchestrated the Creation of COVID-19 and Lab Leak
Redstate
Dementia Joe Forgets Where He Is Again
PJ Media