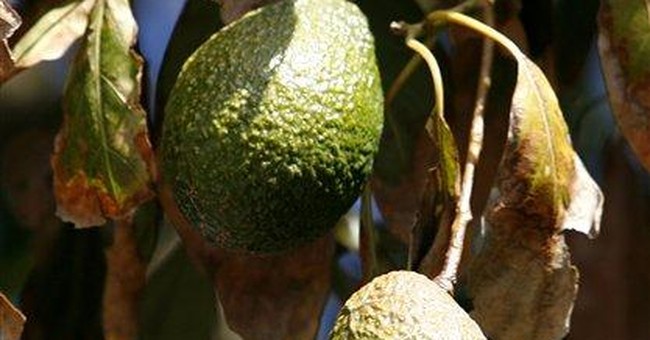 The Super Bowl will be played in Florida on Sunday, and among other indulgences Americans will celebrate by slicing approximately 50 million pounds of avocados. Fans of the game of capitalism and free trade will celebrate three days early. As of February 1st Mexican avocados can be imported into Florida for the first time in 94 years, just in time for kickoff.

The remarkable story of this fruit most likely began in central Mexico around 500 B.C. Archaeologists in Peru found domesticated avocado seeds buried with Incan mummies dating back to 750 B.C. Originally believed to be a sexual stimulant, Aztec families would lock up their virgin daughters during harvesting season and they were not allowed outside.

For the past century, the avocado has been on the center of the table of a historic struggle between protection and free trade, between the United States and Mexico, in a fight that should have ended long ago. The fact that it raged on so long offers clues to our future (I fear) as we struggle to leave the past and refuse to obey a simple law of economics. As a money manager, I believe there is a bumper crop of trades nearby, but as you’ll see – I have a severe bias which I will disclose below.

According to several records, in 1871, Judge R.B. Ord of Santa Barbara secured a number of avocado trees from Mexico and successfully transplanted them, starting the first commercial production of avocados in California.

Around the turn of the century it is said that Carl Schmidt was sent from California to Atlixco, Mexico in search of avocado varieties of the highest quality. He found what he was looking for, and smuggled several seeds back home where he planted them.

In 1913, a great freeze struck California farmers. Few avocado trees survived, including the trees Schmidt brought back from Mexico. It is reported that there was one exception, the surviving variety was called “Fuerte” - Spanish for vigorous and came from Schmidt’s seeds taken from Mexico which provided California a tree that could survive the local climate and an industry was born.

In 1914 the U.S. banned all avocado imports from Mexico, claiming a fruit fly was a risk to California crops. Just a hunch, but I’m guessing the real risk was better avocados at lower prices. It has been alleged that the only place this strain of fly did any damage was in a laboratory.

A mailman named Rudolph Hass purchased a tree as a seedling in California in 1926 and planted it in his front yard. All Hass avocado trees are related to this single "mother tree" in La Habra Heights, California. Hass patented the tree in 1935. All Hass avocados can be traced back to grafts made from that one tree which finally died in 2002.

Over the past several decades Mexico has proposed countless remedies requesting we open up our markets, each time shot down despite the fact that their quality was higher and prices were more than three times lower.

It wasn’t until 1997 that we allowed the importation of Hass avocados from Mexico into 19 northeastern states from November through February.

NAFTA resulted in various trade barriers being removed between the U.S. and Mexico and led to conflict between Southern California avocado farmers who wanted to be protected and Northern cherry growers who wanted access to the Mexican market.

In 1997, the U.S. agreed to partially lift the ban on Mexican Hass avocados, if Mexico would allow U.S. cherries into its country.

It was not until 2006 that Mexico could export into 47 U.S. states with the exceptions being California, Florida and Hawaii. On February 1, 2007, the ban will be lifted for these three states as well.

Breaking the Law, of Comparative Advantage

At the moment U.S. consumers pay as much as $2 for a single Hass avocado. In Mexico, you can purchase two kilos for the same price.

As Mexican importation flourishes, our prices will fall. Yet, we still cling tightly to a tradition of protecting farmers in this country. Even with the new rules don’t assume just because you buy a Mexican avocado at the store there is truly free trade. There are countless fees and regulations I am not even aware of. But my favorite is another dimple to each avocado we add with something called the “Hass Avocado Promotion and Research Order” that assesses a 2.5 cent fee to each pound, to help marketing and awareness in the U.S. While demand is soaring, supply couldn’t keep up. What kind of marketing firm needs to be hired for this project?

We would do better to simply follow the economic Law of Comparative Advantage which practically sets forth that we should import from low cost efficient producers – whatever another country can do best - while we export what we do best, in return. By focusing on natural strengths instead of artificially protecting weakness, both countries could benefit. Yes, as a consequence it ends jobs, but in the history of our country we have proven only one consistent byproduct of this “problem” so widely reported – the freedom born to create a new job never done before.

We cannot afford to ignore this law. For an expensive reminder, let’s look at southern California where most of the avocado crops that we are trying to protect, are grown. I would suggest we have outgrown this asset and face a larger crop of liabilities that, astonishingly, we are asking taxpayers to cover.

When I was out there last year, Santa Barbara city council was considering subsidizing a low-income housing project called Los Portales for families earning less than $160,000. The head of the economic forecast project said, “In this city where the median home price is $1.2mm, that person needs help.” This is what happens when you get down to your last vacant lot. “Some of the people who are going to buy the units are doctors and lawyers,” a councilwoman said. On the open market the units would go for $1mm, but the proposal would be to sell them for half for those with “low incomes.” Since when did when did poverty stretch deep into six figures? When we run out of land, that’s when.

“We are developing over almost 50,000 acres of California farmland every year,” said Al Sokolow, a recently retired UC Davis Cooperative Extension specialist who has studied land-use change in California for 20 years.

If we want to grow like this, there is a tradeoff. We need to hire people for some of the jobs we used to do well, while we create new jobs that they will pay us more for. Both sides do better.

Californians should know better than most, all about this good trade. After all, Silicon Valley used to be fruit orchards too. The argument might be that not everyone can start a technology farm as easily, what about real jobs for real people? Two thoughts: Who said any of this was supposed to be easy? I notice that 150,000 real people work for Hewlett Packard, just to name one company that now “farms” a few acres in that same valley.

There is another huge trade that I am amazed has consistently been overlooked in our efforts to make things easier for our farmers. California’s biggest problem and source of unfunded liabilities according to the same people voting for more protection, is illegal immigration. We judge immigrants too often as taking our jobs. When, in fact, it was an actual Judge who took a seed from Mexico to California and called it his own, taking many of their jobs over many decades.

One of the solutions to illegal immigration is not better fences here; it is better jobs at home. Thankfully, for the first time in almost a century, someone in California can agree with me by buying an avocado from Mexico. But we are dreadfully late in the game. I am afraid that hundred-year-battle will be fought even more vigorously on more fronts by an army of voters who appear to disagree with me more every day. We are at a point in our history and demography where we want our old jobs and stale entitlements to be taken care of, not work for new solutions. Here’s a crazy one to chew on. If we are to truly compete on a global basis, I will predict there is only one way we will have success – become North Americans, by actually working with Canada and Mexico. Finally mixing the best guacamole on Sunday is a small step, but a hint of the best bet on the board in my view.

Easy for me to say let free markets work, as a money manager right? I forget how much of our past we owe to farmers, right? Yes and no. It is easy for me to say but my bias was actually born on a family farm. The dirt-poor Kruegers raised corn in central Texas. I first learned about governments messing with free-trade from my grandpa who explained subsidies provided for farmers to NOT plant certain crops – to help others keep their prices up. He hated it, despite getting paid. He wanted his work to determine his success and that’s what he taught his son, my dad.

He knew what this country was built on because he did part of the building, in a war and then in the fields. Determination and innovation were his only ingredients. He was the first to teach other farmers around him about rotating crops to enhance yields year-around. More importantly, he saw the end. He saw the limits of his life and he taught his son about each of them after that boy was old enough to have only assumed hard-work was the answer (a neat trick he pulled off marvelously). It was only then that my dad learned using his mind could take him farther than the end of a row. My grandpa was the best farmer in Miles, Texas I was later told by many who would know. But his best lesson was teaching my dad how to leave. Against long odds, he worked his tail off to become a doctor instead. He has helped people from many countries as a result. And he enjoyed more than a few Mexican avocados along the way. Comparative advantage at its finest, with a little cilantro mixed in, if you’re asking.

We still have that small Krueger farm. For the first time in decades, there was more revenue from crops a few years ago, than from government subsidies. At that time I began to do more and more work researching agricultural commodities finding ours was not the only one that faced hard times. Over the past 50 years almost two-thirds of American farms have been shut down.

I have invested and traded both futures contracts on agricultural commodities and in the stock market for businesses surrounding this industry, as a result of what I have found. I believe the headlines in less than ten years will not explain how the world is running out of oil; I think they will look more like this: “How do we feed these people?” There are a couple of billion people just getting ready to start what we have all witnessed in this country over the past 100 years - a rising standard of living. Their first desire with their first discretionary dollar will not be for a cell phone or LCD, it will be to have something to eat. That demand is colliding with a business whose supplies are limited. The free markets and the green prices growing in my crop of 12 screens are the only clues you need to understand soaring demand and limited supplies. I owe my past to farming, but my future to my ideas – a trade I learned from my favorite farmer. I never would have imagined wanting to go back to the farm, but I think it will be one of my best investments.