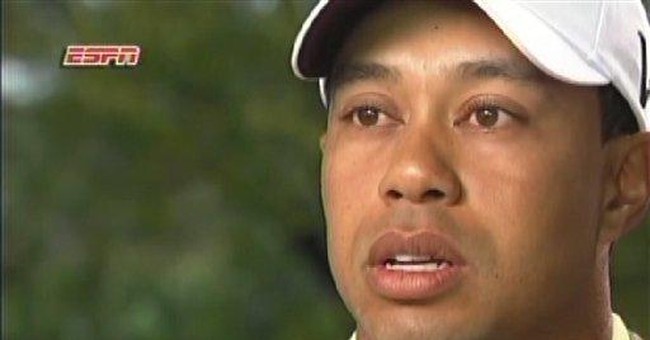 Oh, to be Tiger Woods.

Here's a guy with just about everything. Astounding natural ability honed through disciplined training to near-invincibility on the links. A knock-your-socks-off wife. More gold than Croesus. And a character supposedly matching Moses'.

But then, well, as Rutgers anthropologist Lionel Tiger (obviously no relation) has put it, Tiger -- a serial fornicator addicted to sex -- "landed himself in the worst and oldest sand trap in the world." Mr. Perfect was living a lie. The marble of his statue turned to mush.

That was November. And the golf world went nuts. How would golf survive? What about Tiger's endorsers? What about the TV ratings? What about the hundreds of millions of dollars lost to vendors of golf stuff? The horror and the dread! Oh, and his wife and kids: This must be tough for them, too.

In February, he said he was sorry for making a mess of things for his family. In perhaps the most dramatic public apology since Richard Nixon's "Checkers Speech," Tiger said he was being treated, counseled -- and the therapy would go on. Recovery would take time and hard work. His wife had told him she would accept his words, yet only through his deeds would she know whether he really meant them. He might return to golf, possibly this year.

Now it's April -- and Masters time. And there's Tiger Woods, at Augusta.

TIGER'S wanderings remind that the best and worst parts of us are the secrets we never would reveal.

It also raises, yet again, multitudinous questions about us and our culture -- and the slack we grant celebrity in the realm of forgiveness. Macro and micro questions such as....

-- Is infidelity always wrong, or just sometimes -- especially when the doer of the deed has the looks of a Hollywood actor or Lady Diana, the ability of a Mark McGwire or Tiger Woods, the vaunted standing of a Bill Clinton or a priest?

-- Are we arrived at a gray relativistic hour -- marked not by black-and-white notions of right and wrong but by judgmentless justification, excruciating excuse, extenuating circumstances, situational ethics ("Hey, man, like, y'know, it depends"), and the collapsed moral standards of even our mainline churches?

-- Does the lie, the cover-up, compound the deed?

-- What about apology -- is it always to be believed, always sincere?

-- Does character still count? Where Bill Clinton (he of "bimbo eruption" and blue-dress fame) has failed, maybe Tiger will demonstrate that it does. (Responding to points in a new book, "The Death of American Virtue," by law professor Ken Gormley, Clinton has retorted: "Yeah, I will always have an asterisk after my name, but I hope I'll have two asterisks: One is, 'They impeached him,' and the other is, 'He stood up to them and beat them, and he beat them like a yard dog.'")

AND WHAT of forgiveness?

-- Do golfers forgive golfers their hubris and indiscretions to the same degree non-golfers do?

(Does "what he does off the course is none of my business" apply equally to politicians -- Clinton, Gary Hart, Chuck Robb, Mark Sanford, Newt Gingrich, Eliot Spitzer, John Edwards? Is that maxim true as it relates to the everyday rest of us -- to the guy down the street or the gal in the apartment upstairs?)

-- Do conservatives and liberals, for instance, tolerate the sexual and behavioral deviations of their own more than those of the opposing ideology?

-- Do we hold quantum performers -- entertainers, athletes, politicians, priests -- to higher standards of esteem yet to less stringent standards of tolerance and forgiveness? The more staggering the good-looks (it seems), the higher the talent and visibility, the loftier the position -- the more accepting we are likely to be of behavior wacky, licentious, immoral, and bizarre.

BABE RUTH was the nation's first celebrity athlete, and Tiger Woods the latest.

Going forward, Tiger will demonstrate whether he is but a shameless rake a la Bill Clinton, or whether -- through change -- he can achieve redemption.

Whether he is merely a great golfer living the hubristic Odyssey of the Self-Centered Self (to borrow the title of Robert Eliot Fitch's 1961 book), or whether a great golfer who has learned golf's fundamental, almost stoic, character-building lessons: dedication, loyalty, perseverance, and telling (and living) the truth.

Whether he is genuinely sorry for landing in that sand trap, or whether he is simply sorry he got caught.

Whether his most lasting legacy to the young will be serial sex (as Bill Clinton's was oral sex), or whether his legacy will be to overcome human foible with the same focused determination whereby he has mastered the world's most difficult game.

Whether, indeed, he will be remembered for a repaired character as strong as his game, or whether for locker-room rumor become locker-room legend -- and being lured off course by sultry cats (in British poet William Blake's fine phrase) "burning bright, in the forests of the night."