Christmas Reflections: Amid the Wreckage, the Message From the Manger Echoes Still 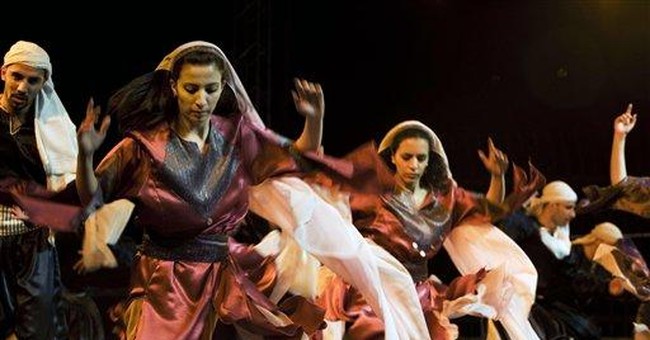 As these random reflections are keyboarded in the pre-Christmas week, the woodland landscape lies shrouded in more than a foot of snow. Cattle are lowing in the field nearby. A hush pervades. Soon the poor baby will wake....

-- The snow is, of course, yet another consequence of global warming -- the extremism of the alarmists, the warmists, exhibited in their contorted view that yes, more snow and colder temperatures are but the latest global indicators. In this doublethink world, with ideological fashion dictated from such places as Copenhagen, how could it be otherwise? How could anyone doubt? Colder means warmer. More snow means less. Two plus two equals five.

-- And so, similarly, with the Obama administration's determination to socialize the nation's medicine -- the Great Obama himself, now self-styled a true-blue centrist, insisting that liberals and conservatives alike have got him wrong, maligned him, misjudged him, and just do not understand that the quality of the nation's medicine is about to soar even as medical costs will plunge. So with confidence in leftist good sense now restored, let the bureaucratic carpet-bombing begin, and let us all get high on the narcotic, the fiscal drug, of high taxes.

-- Positive public sentiment for ObamaCare plunges, but the message from President Obama and Madam Pelosi to the public is -- paraphrasing the famous headline -- Drop Dead. How telling the decisive datum: The health insurance system the legislative and executive plutocrats are bestowing upon us is not good enough for them -- and so they adamantly will not include themselves in it. How lovely if the president and the speaker et al. and their fellow champagne socialists were hoisted on petards of their own -- empty bags on disconnected IVs. Such a development cannot come too soon. Yet it will happen along about the time the Postal Service makes every mailperson a shareholder.

-- TIGER, tiger burning bright. How quickly the klieg light burning hot becomes a dim bulb, how fast an icon of ethics and excellence can fall. No wonder Tiger's pained expression on the tee, reflecting worry about how to keep not just one woman happy, but umpteen -- and how to keep the secret of the lie he insistently lived. We dwell in a universal mire of corruption. Tiger sold himself as different -- above it, beyond it. But alas he emerged as simultaneously corruption's perpetrator and its victim. Hubris knows no limit. Tiger, like everyman, ultimately may be defined by how he performs in his moment of greatest crisis.

-- Hubris: the condition of the high and mighty on Olympus believing they are immune to the consequences of bad behavior. And too often we are hubris' enablers -- too sophisticated to be appalled, too inured to be outraged. About the excesses of entertainers from Hollywood to Washington, from the gridiron to our museums of modern art, from the pulpit to the links. They would not take themselves seriously if we did not. Tiger discloses himself to be not his handlers' ballyhooed paradigm of perseverance and uprightness -- but a man enslaved by sexual appetite, emphatically unliberated and compulsively unfaithful. In this culture, has fascination replaced revulsion? Where is there, in him and so many other swells, any of the humility and honor displayed in The Manger 2,000 years ago?

-- Is the economy in the tank? Many of the stats making the case for that proposition are undermined by all the cars in the holiday parking lots, even those bearing Obama/Biden bumper stickers. Between shoppers and the 20-foot mounds of plowed snow, it's hard to find an open parking space -- or when rushing to see a marvelous movie like "The Blind Side." Yet such an uplifting flick, about the goodness in the human heart, conveys none of the vanity that our ignorantly bestowed honors so customarily revere. Think Oscars and Pulitzers to the ideologized, think Nobel peace prizes to the unwashed and the unschooled.

-- IS IT possible to be for both the environment and over-regulation? Does the one require the other? Maybe the conservationist, an earlier hour's environmentalist, departed the landscape because of an insufficient regulatory impulse -- wherein he sought a governmental hand light in contrast to absolute. A moment of silence, please, for the departed conservationist. RIP.

-- President Obama is giving interviews grandly expatiating on his momentous achievements in his monumental first year. Health care, nuclear treaties, Copenhagen -- and like that. But what about the chavezing (the castroization) of Latin America, often with the blessing of Obama and his administration? What about Obama's collapse before a rampant China, his apologia to Islam, and his bowing seemingly to any and all? What about his hammering of Israel, his dithering on Afghanistan, his rank incompetence regarding Iran? In too many instances, does his foreign policy reduce to being easy on America's enemies and tough on its friends?

-- As in so much, the late novelist Saul Bellow had it right in his determination -- through his writing -- to rediscover "the magic of the world under the debris of modern ideas." Actions and ideas have consequences, as in -- let's see: the election of Barack Obama and the incumbent leftist Congress -- in the socialization of American medicine (with its inevitable rationing and bureaucratism and diminished quality and higher cost), in the inflation and steeper taxes to come, in the unfettered ascendance of China and Iran, in the developing ambivalence toward jihad, in super-regulation entering everywhere (from the economy to the environment to energy to education).

Amid such wreckage, the mind reflects in wonder on the message brought by a baby in a manger 2,000 years ago. And, in a field nearby, the cattle are lowing still.