Quotables: 'Get Tough and Then Get Out' 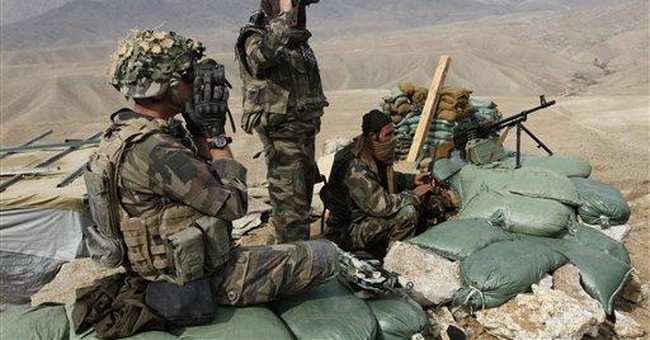 Quotations on Afghanistan and nationalizing the practice of medicine...

Gen. Stanley McChrystal, commander of U.S. forces in Afghanistan: "I believe that the loss of stability in Afghanistan brings huge risks that transnational terrorists such as al Qaeda will operate from within Afghanistan again."

Retired Marine John Bernard, following the death in Afghanistan of his son, Marine Lance Corporal Joshua Bernard -- on the U.S. mission there: "We've abandoned Marines (and soldiers by denying them artillery and air support for fear of killing civilians) in this Catch-22 where we're supposed to defend the population, but we can't defend them because we can't engage the enemy that is supposed to be the problem."

Former Pakistani President Pervez Musharraf: "Yes, absolutely, (it would be disastrous if America withdrew from Afghanistan). By this vacillating and lack of commitment to a victory and talking too much about casualties, it shows weakness (of) resolve....Quitting is not an option."

Fordham University law professor Thane Rosenbaum: "Clearly, the mass murder of nearly 3,000 lives on 9/11 is a substantial debt. After eight years in Afghanistan, with the ranks of al Qaeda depleted but metastasizing elsewhere, the Taliban resurgent, and bin Laden still at large, does anyone believe this debt has been repaid? There are actually two ground zeros: one in lower Manhattan, and the other symbolically located in Afghanistan, where the demonic aspirations of al Qaeda were bred and where bin Laden may still be. Whether in Afghanistan, Pakistan, or some other dark and murderous corner of the world, America simply cannot abandon the obligation of evening this score. Justice demands no less."

Pakistan's Foreign Minister Makhdoom Shah Mahmood Qureshi: "(U.S. withdrawal from Afghanistan before the Taliban's defeat) will be disastrous. You will lose credibility. Who is going to trust you again?...This public ambivalence and the fact that this is being (so publicly debated in Washington), whether to stay or not stay -- what sort of signal is that sending?...If you go in, why are you going out without getting the job done? Why did you spend so many billions of dollars and lose so many lives? And why did we ally with you?"

Robert Kaplan, in the Atlantic magazine: "Watching a young and inexperienced American president appear to waiver on his commitment to their country, (the Afghan people) are deciding, at the level of both the individual and the mass, whether to make their peace with the Taliban -- even as the Taliban itself can only take solace and encouragement from Obama's public agonizing."

Hanif Atmar, Afghanistan's Minister of the Interior: "All the Taliban have to do is blow things up. We have a lot more things to worry about. Despite the deteriorating security situation in parts of the country, we still have a window of time to prevail -- if we and our American allies have sufficient resolve."

American Enterprise Institute polling expert Karlyn Bowman: "Historically, Americans have always hated to cut and run. They want to get tough and then get out."

Barack Obama, at a Democratic fund-raiser in San Francisco: "You know, I'm busy (and) Nancy (Pelosi) is busy with our mops cleaning up somebody else's (health-care) mess. We don't want somebody sitting back saying, 'You're not holding the mop the right way.'...You're not mopping fast enough. That's a socialist mop.' Grab a mop. Let's get to work."

Robert Laszewski of Health Policy and Strategy Associates: "The problem with the American health care system is that you can't afford to cover everybody because it costs too much."

London's Sunday Times: "The National Health Service has spent (about $2.5 million) paying for hundreds of its staff to have private health treatment so they can leapfrog their own waiting lists. More than 3,000 staff, including doctors and nurses, have gone private at the taxpayers' expense in the past three years because the queues at the clinics and hospitals where they work are too long."

Arthur Brooks, president of the American Enterprise Institute: "The health-care debate is part of a moral struggle currently being played out over the free enterprise system. It will be replayed in every major policy debate in the coming months, from financial regulatory reform to a cap-and-trade system for limiting carbon emissions. The choices will ultimately always come down to competing visions of America's future. Will we strengthen freedom, individual opportunity, and enterprise? Or will we expand the role of the state and its power?"

A reader, in an e-mail: "Let me get this straight. We're going to pass a health care plan written by a committee whose head says he doesn't understand it, passed by a Congress that hasn't read it but whose members exempt themselves from it, signed by a president who also hasn't read it (and who smokes), with funding administered by a Treasury chief who didn't pay his taxes, overseen by a surgeon general who is obese, and financed by a country that's nearly broke. What possibly could go wrong?"