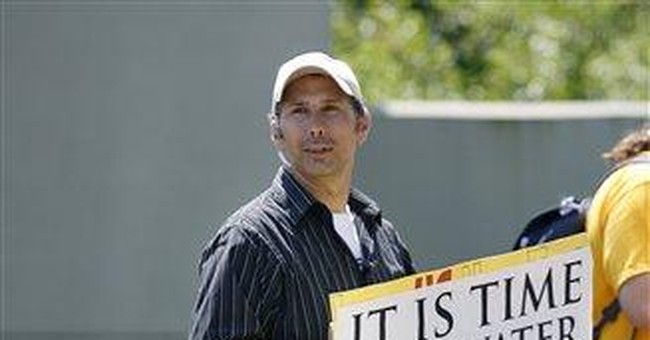 Domestically, it's a heart beating hotly for throttling American industry in the name of a cleaner environment. For "energy independence" without expanded nuclear power. For a "stimulus package" (etc.) causing (in for instance the fiscal year ending this fall) record-setting $2 trillion annual deficits. And for the government running "reformed" banks, insurance companies, automobile manufacturers, and the nation's health delivery system with all the efficiency of Amtrak and the Postal Service.

In matters foreign, it consists in going ga-ga over - well, let's see....

-- Secretary of State Hillary Clinton telling India to sign on to an anti-global warming agenda - and India's environmental minister Jairam Ramesh responding, in effect, no way.

-- The Obama administration likewise hammering our friends - (a) Israel, for deeming nuclear weapons in the hands of Iran as somehow more destabilizing than West Bank settlements, and (b) Colombia, by failing to push through the Columbian free-trade act (1) because of Big Labor opposition and (2) because of, you know, Colombia's success against Castro- and Chavez-backed drug-traffickers.

-- The president himself bowing to the Saudi king, offending England's queen, kissing Chavez' cheek, informing Mexico illegal guns from America were the principal cause of violence there, and apologizing to foreign friends and enemies alike for the abiding virtues of the United States.

-- Building new anti-missile sites in Hawaii following North Korea's missile tests, while savaging (even defunding) demonstrably successful anti-missile programs that, since 2001, have produced 37 hit-to-kill intercepts out of 47 attempts - an astonishing 80 percent success rate. (Notes a former head of the Defense Department's Missile Defense Agency: "Our testing has shown not only can we hit a bullet with a bullet. We can hit a spot on a bullet with a bullet.")

-- The administration concluding that nuclear non-proliferation treaties are not inconsistent with democracy and human-rights initiatives - with the president's chief speechwriter on national security affairs (Benjamin Rhodes) saying: "You can (indeed) walk and chew gum on these issues."

-- The president making nice with Russia on missile stockpile reduction and missile placement - and seeking a partnership on common concerns and mutual interests - only to be rhetorically smacked down by his host (President Dmitry Medvedev) the moment Air Force One lifted off the Moscow runway.

-- Regarding Iran, whose nuclear ambitions likely will be neutralized only by the regime's abandonment of them or by an (Israeli) air strike, insisting on diplomacy and "engagement" - in the hubristic leftist belief that with enough time and enough reasoning together, any enemy can be made one's friend.

-- And through his policies of appeasement and spending down our defenses, President Obama implicitly dissenting from the April, 1950, National Security Council report 68, signed by President Truman, which states: "No people in history have preserved their freedom who thought that by not being strong enough to protect themselves they might prove inoffensive to their enemies."

Brimming with confidence in his abilities and certain of the rightness of his views, (President Obama) has undertaken a wildly ambitious agenda at home and abroad. He will bring peace between Arab and Israeli, wean Iran from its nuclear ambitions, restructure the international financial system, set us on the path to abolition of nuclear weapons, reconcile Islam and Christendom, and end global warming, while introducing universal health care at home and bringing the country out of the deepest economic crisis since the Great Depression.

So...what's Obamamania? Unbridled enthusiasm for all those dubious developments, initiatives, comments, and programs. That's "change we can believe in" - yes oh yes we can!