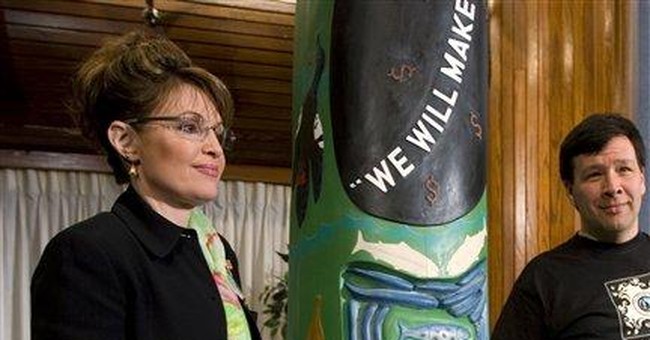 OK. So how about a single word to describe John McCain’s selection of Sarah Palin as his vice-presidential running-mate?

Sensational. If he becomes the next president, he may well look back and see this decision — this long Statue-of-Liberty pass downfield — as winning the game for him before Labor Day.

What’s so terrific about Gov. Palin?

How much time do you have? She’s a young, articulate, can-do-it-all mother of five. Got into politics at 28 running against tax increases. Four years as mayor of Wasilla, Alaska, give her more executive experience than Messrs. Obama and Biden combined — in addition to her executive years as governor. A reform-minded Alaskan (the state’s first female governor and, at 44, its youngest) who threw out the (Republican) bums.

She’s a change agent who is a finger in the eye of Obama’s vacuous “change” mantra. She also does crucial things for Republican success Nov. 4:

— As a woman, she peels away at least some of the Hillary feminists disenchanted with Obama-Biden. They wanted the Democrats to offer the first African-American and the first woman for vice-president. Now Sarah Palin, a Republican, is the only woman among the Big Four.

— Obama belied his commitment to change by going with Caroline Kennedy’s recommendation and choosing — in six-term Senator Biden — one of D.C.’s tightest, most ingrown insiders. McCain, who has rattled the cage of the status quo for most of his political life, reached for his running-mate to the governor of a state as far from Washington as one can get — and to the former mayor of precisely the heart-of-America small-towners Obama oddly insists cling to their religion and their guns because they are deeply “bitter” about their lot in life.

— Not only did Republican Sarah Palin throw out corrupt Republicans in Alaska. She also declares straight up that she is a conservative both “fiscally and socially.” So her selection stresses the division between the two tickets: the Republican emphatically conservative, the Democratic (consisting of the Nos. 1 and 3 farthest-left members of the Senate) mired in the fever swamps of liberal Democratic orthodoxy.

Perhaps. But two points. First, self-described conservatives in the electorate outnumber self-described liberals by about 2-1. That’s why the forthrightly conservative ticket usually wins. So McCain’s selection is politically sound.

Yet I thought that presidential elections were heavily about the presidential nominees, not their running mates — that vice-presidential choices historically affect campaign outcomes hardly at all.

No question. This election is fundamentally about Barack Obama and his motivating ideology. And that compounds the problems facing John McCain.

Obama is a greatly gifted orator whose words offer little beyond vapid leftist bromides. He won local and state elections giving zero push-back to the Chicago machine that raised him up. Now, on the national stage, with utterly no tangible (as opposed to electoral) accomplishments, he has beaten a Clinton, for heaven’s sake. He has bewitched a fawning national press. And there he was last week accepting the Democratic nomination before 80,000 in the Broncos stadium on a stage fashioned by Britney Spears’ set designer — the whole hosanna scene suggesting the main player’s ascension to Olympus.

McCain is hardly Obama’s rhetorical equal. Yet his achievements and experience run circles around Obama’s, and McCain embraces the preferable political philosophy — by far. His party, under Reagan a vehicle for ideas and reform, has grown leaden and too-often corrupt. And his president’s popularity seems each day to set new records for low.

So with Obama getting maximum attention, McCain had to do something. He needed to change the campaign dynamic. Simultaneously he needed to fire up Republican partisans and — to invite further consideration by independents — somehow break public fixation on the Obama spectacle.

Do we know what she believes, or has said, about anything?

Try these Palin quotes: (1) “You can be a reformer and a conservative.” (2) “America needs leadership devoted to the public interest — not to the special interests.” (3) “I believe in a strong military and sound energy policy.” And (4) “It’s nonsense not to tap a safe domestic source of oil” — and America has those sources in abundance.

Obama-bound bloggers and pressies will do all they can to see that it doesn’t. Yet so far it evidently has, big-time. Stay tuned.

With an Obama defeat, or a one-term McCain presidency, don’t bet against a tilt pitting Sarah Palin against Hillary Clinton — or maybe against that other Clinton with dynastic potential, Chelsea — in 2012.

Democrats' Division on Israel Highlighted in Fight Over Arms Sale. Here's What Some Want To Do.
Matt Vespa