Can They Finally Get It Right? 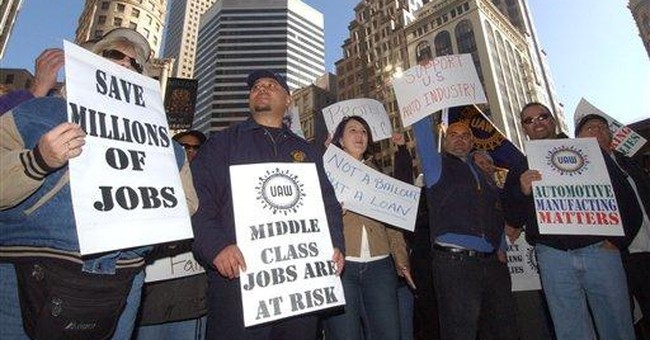 Stop me if you have heard this one. The President of the United States and all of the legislators decide to lessen the bad part of the business cycle. When the economy runs into tough sledding they simply agree to give money to the companies and industries that are having hard times to make sure that the hard times go away and the pain stops. The President is of one party and the legislators, who are in control of both the House of Representatives and the Senate are of the other party. Did we have to squeeze paltry sums of money out of this group? Not exactly. It flowed like beer at a fraternity party to the tune of over $8 trillion dollars including all of the guarantees. Well at least we got our economy back on track and things are good again. Whoops, that hasn't happened. In fact things are getting worse: more businesses are failing and unemployment is really growing. How could this be?

Mistakes, miscalculations and perhaps some plain old fashion foolishness. To make this as succinct as possible, I believe that most of the money was simply misspent. The glaring example was the TARP money, about $700 billion, which was to buy up troubled assets. Instead a large portion went into buying pieces of banks. The idea was to show that banks could lend their money to each other as well as consumers and businesses without worry because they were partially owned by the government. Strike One! Nobody seemed to care or notice and the credit markets barely budged. The part that sticks in my craw, and probably yours as well, are the earmarks which were needed to insure that Congress would even pass the bill creating the TARP. About $120 billion or so as reported by the media.

We loaned $80 billion to AIG, the world's largest insurer, and lo and behold it is up to about $150 billion. How did that happen? AIG was so excited they threw a very expensive party in a posh resort which the media caught and helped put "egg on their faces". We saved a few brokerage houses yet let Lehman Brothers go under. It was akin to kicking some one out of the life raft as the ship is sinking. Was Lehman chosen because Hank Paulson, the Secretary of Treasury, was the former head of Lehman's rival, Goldman Sachs? We even had a Senator start a run on the bank that initiated the beginning of this mess. Collectively, Strike two!

I know I am leaving out a number of juicy tidbits but this column is dedicated to finishing the current fiasco by making sure the "rest of the money" is spent in a way that actually helps. Last week a trial balloon was floated by supposedly the Treasury stating they would lower rates in the mortgage market to 4.5%. If I hadn't heard it on television or read it in the newspapers I still would be writing this because of the hundreds of emails I got attesting to the statement of fact? After the first announcement we had two things happen. Mortgage rates dropped a minimum of 1/4% and in some cases more. Some clarification in the form of probably another trial balloon came stating that the money allocated for this, about perhaps $250 billion would be to buy builder's loans on the sale of their inventory. I started to get exicited when I realized that this would make ultimate sense. In fact, I thought, that if they used all the money only for purchases we could stop real estate's decline in its tracks. This would get people out buying the heavily discounted real estate and the recovery could begin. In the meanwhile everyone was looking for the magic interest rate, 4.5%, which hadn't appeared. 4.875% did appear in the conforming market for 30 year, 20 year and 15 year money with some charge in the form of a point or so for this interest rate. We even got a lender to get 4.7% out to the jumbo market with a 3 year fixed which becomes a 27 year variable. This also carried a charge in the one point range.

The next thing we heard was the "sound of silence". The stock market had rallied over that interest rate, believing this would get the mortgage and real estate market on the road to recovery which would help many other industries. The flight to safety in the bond market started to reverse as the stock market got stronger and rates in the mortgage industry started to inch upward. Still no announcement from the Treasury Department.

So I am forced to ask in this holiday season, are we going to get the presents we thought we heard mentioned or is it going to be twigs and coal which we believed we were going to get all along?

Buying builder loans and dedicating low interest rates to purchases is the best move to come out of all that has transpired since the credit crisis began. If the builders can shed their inventory they will have the confidence and the money to once again start building. If the rates are at 40 year plus lows and real estate prices have been rolled back 4 or 5 years then we have the perfect scenario for people to start seeking homes again.

Low prices and low interest rates rarely show up at the same time and when they do everything works. We have dug ourselves a collective hole that could get us directly to China. That is how deep we are currently. If we are going to continue this game which is a combination of Father Knows Best and the Millionaire, and it appears we are, why not do something that actually makes sense? We are not bailing out an industry that has gone down hill for over half a century and has less than a 50-50 chance of making it back to viability, we are stopping the problem in its tracks and turning two industries around. Why isn't there any sound?

Can we reverse the first two strikes. I believe it is too late and all we have to look forward to is paying and paying and paying it all back. If housing and the rest of real estate turns around at least we will have recaptured some of the huge losses that are at least on paper. Speaking of paper the write downs of billions of dollars that the banks took could all be reversed, or at least a good portion of the paper. When real estate prices go up loans that were worth more than the property become good collateral again. There is a happy ending to this fable if and only if those who wield the power and spend the money use it correctly this time. The clock is ticking, but it isn't too late. Let us have the gift of low rates for this holiday season and perhaps all will be right again for the holiday seasons to follow.

A Group Of Parents Sent Their Kids' Face Masks to A Lab for Analysis. Here's What They Found
Townhall
Patriarchal, sexist Victoria's Secret replacing the Angels with soccer star Megan Rapinoe and the rest of the 'VS Collective'
Twitchy
Joe Manchin Phone Call Leaks and It Has Massive Implications
Redstate
LOSING IT: Read Lori Lightfoot’s DERANGED Emails to Staff
PJ Media