Inflation and the Federal Reserve 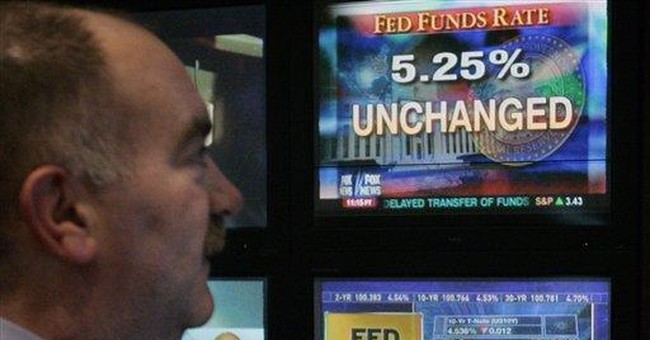 The titled subjects are the talk of the financial town and yet so few understand what either really are, especially inflation, and how it relates to our economy, workers, and individuals.

Add into the mix the Federal Reserve Bank and you have misunderstanding on top of lack of knowledge and together they make up some of the greatest mistakes we ratify in our financial lives. How do I know? I see what people have done with their finances and read what people say about some of my solutions and realize they either don't understand or they can't make the moves that are necessary to protect themselves.

Inflation is caused by too much money chasing too few commodities or goods, demand push, or in some cases by a price surge in certain commodities (like lumber) that forces sudden cost increases in correlating industries (like houses) thereby forcing prices up (cost pull). These occurrences have always been with us and probably always will be in our economy.

Inflation has been mitigated in its "sting" partially because of the way we measure it. The components have changed over the years and the fact that we remove food and energy when measuring the core inflation is one of our most curious exercises. The one thing that is certain in all of our lives is that we use food and energy every day. I dare say that isn't true of the other items that make up the inflation gauge.

In 1957 gasoline was around 18 cents a gallon, in 1973 around 37 cents a gallon and now we are looking at over $3.00 a gallon. The cost of driving has risen as fast or faster than any other commodity and yet it is "volatile" and not part of the core. ( I realize that taxes add a great deal to the price of gasoline, especially in California, but that doesn't change the fact of the incredible rise in the cost to us). Milk was fair traded in California until the late 1970's at $1.26 a gallon and since that was repealed it has gone to $3.50ish a gallon.

In 1966-7 when I was dating a meal at the best restaurant, including tip, was under $10 for two people. That doesn't generally cover the parking at the "top spots" today.

When I graduated from college my goal was $10,000 a year. This speaks volumes about adjusting your goals as you grow.

The Federal Reserve Bank which is owned by member commercial banks in the United States is out to fight inflation with their ability to regulate the money supply through their open market operations (buying and selling treasury instruments to the member banks) and the setting of interest rates on the money that banks borrow from them for short periods or monies borrowed between the member banks. These acts are designed to stop both recession and inflation but in the exercise of their plans they actually help cause, in my opinion, what they are trying to control in some cases. As they raise interest rates to slow down the economy and curb inflation that actual raises the cost of money to business who then must either absorb the cost and reduce earnings or pass the cost on to the consumer in the form of higher prices. Eventually the economy slows in the lowering of demand for goods but the monetary cost doesn't get better until they start cutting the interest rate. Just a thought!

The conclusion that I have drawn is that inflation is here to stay and the Federal Reserve cannot stop it or in reality even control it. I think the fact that we are part of a world economy has a better chance of controlling our inflation than the Federal Reserve. If we are too expensive we won't be able to sell our goods abroad and will be forced to import more than we export and end up with a large deficit current accounts balance. Come to think of it we are there now. Oil, anybody?

So what can a person do? The answer is always the same: inflationary hedges. These are investments that rise with inflation, protecting your assets, and include real estate, gold and other commodities,stocks, rare treasures such as art and books, stamps, some automobiles,etc. Those items that aren't inflationary hedges are bank accounts, cash, annuities and pensions without inflationary gauges, most automobiles (unless kept in pristine condition), bonds and other fixed financial instruments, etc.

Financing of inflationary hedges is desirable (if it is in your makeup) because you borrow the money and pay it back with cheaper (inflated) dollars. Recessions are not favorable for inflationary hedges but they generally return to their old value after the recession is over and continue increasing in value to keep pace with inflation. Depressions are disastrous but we haven't had one in almost 80 years and no one has predicted one in the future.

So what are you going to do to protect yourself from inflation?

Real Estate is generally the hedge of choice, even though people do not realize what they are doing for themselves. There will always be the desire of Americans to own their own house and for foreigners to come here and eventually own their own house. Foreigners in the "right" countries have a real incentive to buy our real estate as the dollar weakens against their currency. That means they can buy our real estate at a discount by using their stronger currency and converting it to dollars. They are doing it and will continue to do it, certainly a plus for real estate.

Regardless what you choose in the way of an inflationary hedge the younger you are the more important it becomes. Learn what you can about inflation, the methods the Federal Reserve employs to fight it and what you must do to live under the veil of inflation. Your wealth and your standard of living depend on it.