Getting Real About Health Care Reform 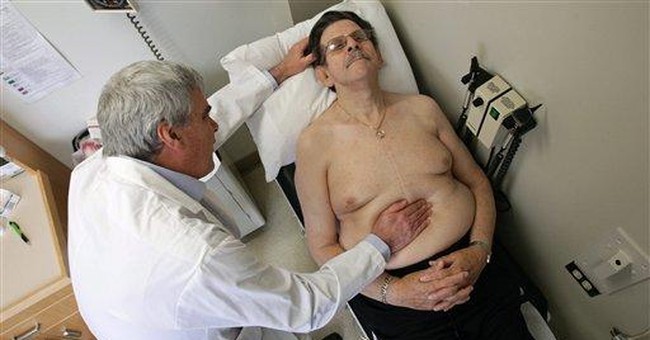 Prior to our power-driven politicians adopting an untested and badly flawed health insurance plan that would hurt the average citizen’s quality of care and very possibly bankrupt the country, I would urge they walk before they run.

Why not formulate three different experimental approaches to health care reform? There could be the Democrats’ command-and-control plan, the Republicans’ free-market based plan, and a compromise version. To test the plans’ efficacy, three or more states could implement these respective plans on a state level. The federal government would underwrite all net costs for the participating states to implement the plans on a trial demonstration basis for at least four years. An independent, bi-partisan commission could then evaluate the outcomes of the trials and recommend a single national health care reform plan to the Congress.

Note: While I’m not thrilled about adopting the Democrats’ plan in even a single state, better that an actual trial in but one state clearly proves how bad the plan really is than risking the Democrats’ saddling the whole country with it.

The states might also be invited to submit their own reform plans for consideration by an independent commission and possible matching funds underwriting by the feds. This could hopefully enable a wide variety of approaches to be tested, all with the idea of better ensuring the prospect of true and effective reform down the road.

My own preference would be to essentially keep the system we’ve got while federally subsidizing private health insurance plans for those folks needing help, but who must qualify by meeting reasonable wellness standards. The standards could be waived in special cases. Personally I resent my tax dollars being used to subsidize health insurance for obese individuals, smokers and others whose medical problems are largely due to unhealthy lifestyles. This would simply encourage more unhealthy behavior, which is a major factor in making the whole system less affordable for nearly all of us. Unless we also put in place a massive health prevention program and strong economic incentives (i.e. lower insurance premiums) to adopt a healthy lifestyle, we’ll never be able to fix the present system no matter what else we do.

One crucial element of any prevention program must be mandatory daily aerobic exercise and nutritional instruction programs in all K-12 schools. Just as students should meet academic standards before going from grade to grade so should they meet fitness standards.

It is estimated that well over half of all medical expenses are attributable to unhealthy behaviors such as lack of exercise, overeating and poor choice of foods, smoking, alcohol and other drug abuse and the failure to take recommended screening tests and comply with drug regimens. The savings resulting from an effective prevention program could ultimately exceed $500 billion annually.

Just as liberal politicians have again and again unconscionably sold America’s schoolchildren down the river in order to buy union votes and campaign money – no matter the consequences for academic outcomes, so too will they support all the wrong kinds of so-called health care reform.

With the country already facing trillions in new debt and the likelihood of major tax increases, it’s downright reckless and irresponsible to unnecessarily adopt sweeping, untried changes in the system. Such changes could prove to be the straw that broke the camel’s back when it comes to our nation’s economy. And once adopted, they will undoubtedly be extremely difficult to reverse.

We need only look at what happened in Massachusetts where a state mandated health insurance plan has so greatly exceeded original cost estimates that analysts believe “bureaucratic rationing and price controls” are right around the corner. And with them, a lower quality of care.

So why invite total catastrophe when we can use today’s heightened interest in health care reform to find out what really works and then apply it to fashioning a sound new national approach that most of us would then gladly support? Surely getting health care reform right should be far more important than rushing to judgment for the sake of political expediency.