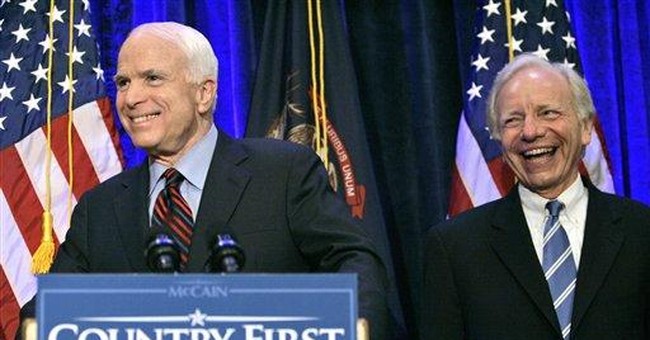 WASHINGTON, D.C. -- Reports of strong support within John McCain's presidential campaign for Independent Democratic Sen. Joseph Lieberman as the Republican candidate for vice president are not a fairy tale. Influential McCain backers, plus McCain himself, would pick the pro-choice liberal from Connecticut if they thought they could get away with it.

But they can't get away with it -- and this has been made clear to McCain by none other than Joe Lieberman himself.

Lieberman surely doesn't know that much about Republican politics, but he has close Republican friends. One of them prevailed on Lieberman to tell McCain that a McCain-Lieberman ticket would be a disaster for all concerned, and especially for the GOP.

Actually, Lieberman is a heroic figure among Republicans for having risked his Senate seat to support President George W. Bush's war policy. But aside from the war, he votes the straight liberal line, including pro-choice on abortion. Lieberman's Republican friend told him that the Republicans would leave Minnesota in a state of disarray with a McCain-Lieberman ticket, alienating social conservatives who now make up the core of Republican voters.

At the heart of the desire for Lieberman as running mate is a basic strategic disagreement between the Bush and McCain high commands.

McCain's top strategists argue that the Bush coalition that won the last two presidential elections is dead and must be replaced by a new one that extends to the left, as Lieberman would. Bush strategists disagree, asserting that McCain is getting around 90 percent of the old Bush vote and can win the election with a few moderates added in.

The Republican operative who urged Lieberman to dissuade McCain from picking him believes that there is still a very useful role for the maverick Democrat in this campaign: as McCain's secretary of state. While an announcement in St. Paul of Lieberman as vice president would bring groans from the assembled Republicans, placing him at the State Department would evoke a standing ovation.

At this writing, nobody knows McCain's choice. He is keeping the selection process secret, and his closest aides are in the dark. Could he still name Lieberman after being told by Lieberman himself that it is not a good idea? Nobody absolutely rules it out.

Selecting a vice presidential nominee from the opposite party has not fared well, partly because the two most prominent such selections quickly succeeded to a vacant presidency.

Those problems might be less serious for Lieberman should he quickly succeed to the presidency, however. He is on intimate terms with the McCain inner circle, especially Republican Sen. Lindsey Graham of South Carolina.

Still, Republicans assembling in St. Paul have their fingers crossed that McCain will not press his luck by naming Lieberman as his running mate.