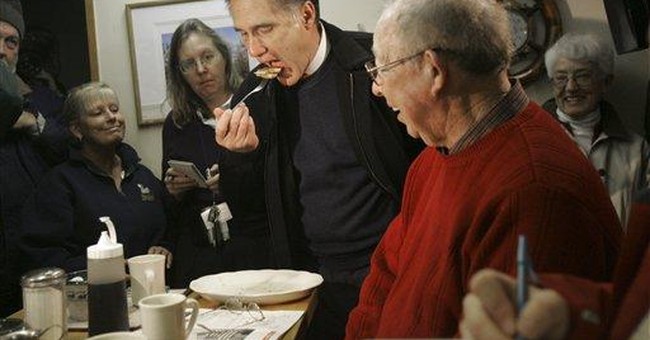 MANCHESTER, N.H. -- Desperate to save Mitt Romney's Republican presidential campaign in Tuesday's New Hampshire primary, his advisers all wanted to attack Sen. John McCain but were divided about how to do it.

Coming out of his disappointing performance in the Iowa Caucuses, the Romney camp was united in the need to hit McCain hard for voting against President Bush's tax cuts. But the decision also to attack McCain's support for the liberal Bush immigration reform was opposed by a minority of Romney's advisers. These dissenters argued that Romney's hard line on immigration taken in Iowa did him no good there.

A footnote: The estimated 60 percent of New Hampshire "independents" who are Democratic-aligned voted for McCain in the 2000 Republican primary but are expected to be solid for Sen. Barack Obama in the Democratic primary this year. Nevertheless, McCain's strength with the remainder of the independents makes him the favorite against Romney on Tuesday.

No sooner had Sen. Hillary Clinton slipped to a third-place finish in Iowa than her agents in Iowa were saying that their campaign would be content if she finished second in New Hampshire ahead of John Edwards and effectively drove him out of the race.

Those comments, in sharp contrast to Clinton's previous professions that her election as president was inevitable, constitute an attempt to lower expectations in New Hampshire. At the same time, Clinton has not abandoned hopes of defeating Obama in Tuesday's primary.

What Clinton cannot afford in New Hampshire, however, is another third-place finish behind Obama and Edwards.

Even before the bad news for Sen. Hillary Clinton was in from Iowa, two veteran Democratic political practitioners -- Chuck Campion and Joe Grandmaison -- were dispatched to New Hampshire to try to save her failing campaign.

Campion, a Massachusetts Democratic stalwart, long has been considered one of the Democratic Party's ace organizers. Not active until now in the 2008 campaign, Campion was a senior campaign aide for Democratic presidential nominee John Kerry in 2004.

Grandmaison long has been one of New Hampshire's top Democratic insiders. He now lives in Washington, D.C., where he is on the Export-Import Bank's board of directors.

Published reports that Fred Thompson soon will withdraw from the Republican presidential contest and endorse Sen. John McCain have been traced in part to Mitt Romney's campaign, trying to stir up strife between McCain and Thompson.

There is no question, however, that McCain strategists would welcome Thompson's endorsement if and when he drops out. It could help McCain in the Jan. 19 South Carolina primary.

A footnote: Out of money, the Thompson campaign took a unique approach to the Iowa Caucuses Thursday with a "blast" e-mail to the candidate's contributors: "Get out your Christmas card list, your PDA (personal digital assistant), your Rolodex -- any list you might have of families in Iowa. If you don't know anyone in Iowa, you can visit our Website and make calls today on Fred's behalf." Thompson finished third in Iowa, slightly ahead of McCain but far behind Mike Huckabee and Romney.

With Rudy Giuliani finishing a poor fifth in Iowa and figuring to be no better than third in New Hampshire, his campaign is telling Republicans to be patient and wait for the former mayor of New York to win in California, New York and New Jersey on Feb. 5.

Those three states will send 326 delegates to the Republican conventions, compared to 232 delegates from all the states voting prior to Feb. 5. Thus, Giuliani could get back in the race by grabbing a big share of the California-New York-New Jersey jackpot.

The question is whether Giuliani will be viable on Feb. 5 if he fails to win a primary before then. His best chance for an early win will be in Florida on Jan. 29.